How Germany contributed to creating the Van Gogh myth

The legend of Vincent van Gogh has always sold well. This is particularly true of Germany, where the myth of the brilliant, reclusive Dutchman gathered steam soon after his suicide as a 37-year-old in 1890. His vivid, post-impressionistic painting style and bold compositions and motifs developed a devoted following in Germany and influenced a generation of artists including the Die Brücke and Blaue Reiter painters.

The posthumous curating of the legend of the self-taught Van Gogh, who barely sold a painting during his lifetime, is the subject of a new exhibition at Städel Museum in Frankfurt am Main titled "Making Van Gogh: A German Love Story." It especially explores the integral role of gallery owners, museums, private collectors and critics in creating the myth of Van Gogh as the "father of modern art" in Germany.

Indeed, the once-obscure artist was heralded in Germany long before most other countries, and by 1914 around 150 works by Van Gogh were already held in private and public German collections. Many are among the 120 paintings and works featured in the "Making Van Gogh" show, and are flanked by the works of his admirers, imitators, forgers and critics including Max Beckmann, Ernst Ludwig Kirchner, Alexei Jawlensky, Gabriele Münter and Paula Modersohn-Becker.

Immersed in the Works of Van Gogh

Immersed in the Works of Van Gogh

The result is a certain crowd puller, with museum director Philipp Demandt calling "Making Van Gogh" the "most elaborate Städel show of all time." Having revealed that several million euros were raised by friends and sponsors of the museum for the show, Demandt opined that "without Van Gogh, the history of modernism in Germany would have been completely different."

One architect of Van Gogh's relatively early success in Germany was undoubtedly the wife of younger brother and patron Theo, Johanna van Gogh-Bonge, who edited and published the painter's letters and sold his unknown works to German art dealers. Indeed, before the First World War, Van Gogh's paintings had appeared in almost 120 exhibitions in Germany, while his presence in the Cologne Sonderbund exhibition in 1912 is said to have consolidated the Dutch master's growing reputation as a pioneer of modernism. The Städel show also addresses the special role that German gallery owners and private collectors played in birthing the Van Gogh legend in the early 20th century, in addition to art critics like Julius Meier-Graefe, who portrayed Van Gogh as a tortured artist veering between madness and genius in his novel Vincent (1921). 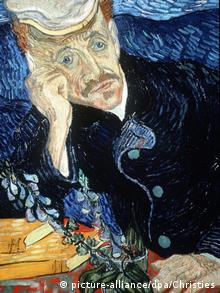 As German collectors like the industrialist Karl Ernst Osthaus purchased works by the Dutchman, public museums soon followed — despite protests by artists, including in Bremen, against the supposed supremacy of French impressionism in German museum collections. Van Gogh's triumph in Germany was unstoppable it seemed. While his peculiar style evoked some criticism, his works, as the curators emphasize, soon made others euphoric.

The retrospective in Frankfurt also evokes the dark period when the Nazis labelled Van Gogh's work "degenerate," with paintings such as Portrait of Doctor Gachet, acquired by Städel in 1911 after it was initially sold by Johanna van Gogh-Bonge, having been confiscated in 1937.

The blank picture frame of the painting at the show evokes a bleak chapter of German art history. A podcast titled Finding van Gogh accompanies the exhibition and tells the story of the now-vanished masterwork that in 1990 became the most expensive artwork ever sold.

While pictures by Van Gogh are instantly recognizable, pictures of him are apparently less clear-cut. A famous photo thought to show the shy impressionist artist known for "The Starry Night" actually isn't of him. (29.11.2018)

Two pieces by the Dutch legend have been unveiled anew at the Van Gogh museum. They were found six months ago in the villa of a suspected Italian drug lord. (21.03.2017)

Amsterdam's renowned Van Gogh Museum has a new exhibition which focuses on the artist's final 18 months before he shot himself in 1890, including the suspected gun he used to commit suicide. (14.07.2016)