How far will southern Spain′s resources for refugees go? | Europe | News and current affairs from around the continent | DW | 17.07.2018

How far will southern Spain's resources for refugees go?

When the Aquarius docked in Valencia, the 630 migrants on board were welcomed by over 2,400 volunteers and medical staff. But what happens to those who arrive from Morocco? Santiago Saez reports from Cadiz and Madrid. 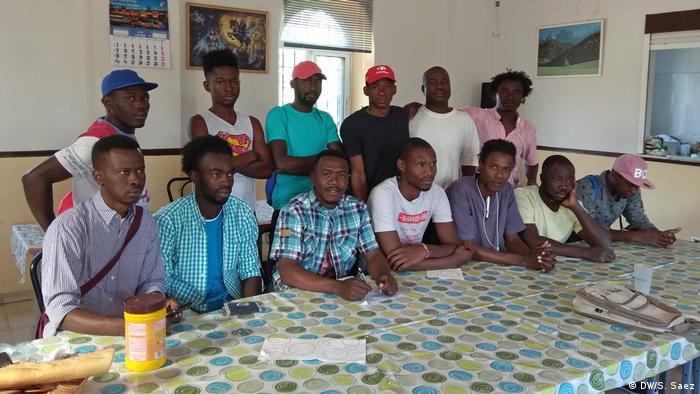 On July 4, 14 African refugees were waiting for a bus outside the San Carlos Borromeo parish in Madrid, accompanied by a woman who volunteers at the parish, and who took them to the local Red Cross office to check if they had available beds.

Aliou, from Senegal, had arrived at the parish the night before. He's tall and speaks French with a soft voice, almost a whisper. For him, arriving in Spain has been a roller coaster of emotions, from the "incredible joy" of being rescued at sea to the frustration of roaming through Madrid all day with nothing to do. "We just want to learn the language and work wherever we are needed," he told DW.

"Me and three others arrived at the South Bus Station in the morning, after travelling all night, and didn't know where to go," he said, adding that locals directed them to the parish.

Aliou and his friends were not the first. On the evening of June 27, with the arrival of the Aquarius still fresh in the world's memory, a group of 12 migrants knocked at the door of SOS Racismo Madrid, a local advocacy organization. According to a statement published on the NGO's website, someone had bought them a ticket in Malaga and given them a piece of paper with the organization's address. But SOS Racismo doesn't have accommodation to offer. Carlos Carvajal witnessed a similar scene on May 31, when 14 people arrived at the door of Cardijn, the association he manages in the southern city of Cadiz. They had been identified and released by the police of San Fernando, a city directly south of Cadiz. They then covered 10 kilometers (6 miles) on foot to get to Cadiz, including a dangerous and illegal walk on the highway.

"They were in a situation of total abandonment by the administration, which hadn't prepared an emergency protocol. We were completely full, but still sheltered them as best as we could. What could we do?," said Carvajal, who thinks Spain "has moved forward in the last years," but still has a lot of work to do. "We need an emergency protocol to help people in situations like this one," Carvajal told DW.

Almost 5,000 people reached Spain illegally by sea last month. The situation is busy, but not unexpected. "We were right to expect an increase in the number of people using this route this year. There's fewer people trying to reach Europe, but they come this way because we pay Turkey and Libya to keep them away from us," said Carvajal.

A stark contrast to other migrants

For people working on the coast of Cadiz, the treatment granted to the migrants who arrived on the Aquarius is good news, but they are disappointed that the resources are not applied to those far from the spotlight.

Elena Tajuelo is the president of Andalucia Acoge, an organization working for the integration and the assistance of migrants in southern Spain. For Tajuelo, the government showed "goodwill and solidarity," with its handling of the Aquarius, [Following Italy's refusal to take in hundreds of migrants, the Spanish government agreed to let the boat dock in Valencia — the ed.] but she pointed out that so far this year 18,000 people have already reached the coast of Spain. "The conditions here in the south leave much to be desired," she said. "We can't keep patching up this issue, we need to manage it not as a problem or an emergency. It's part of the structure of our society."

Ana Rosado, an activist and researcher with the Andalusian Pro-Human Rights Association (APDHA) in Algeciras, a Spanish town just 14 kilometers from the African mainland, agrees. "Everyone should have a chance to migrate in a legal and safe way. However, as things are right now, that guarantee of good treatment should be the bare minimum for everyone."

Back at the parish When Aliou and his friends arrived at the parish, it was already late. The priest, Javier Baeza, welcomed them and took them to the main room, where others were already sleeping.

Baeza is an energetic man of around 60. He speaks loudly, laughs even louder and wears sunglasses indoors. He's a local celebrity in Madrid, where people know him as the "Red Priest" for his progressive views, which are frowned upon by the Church's conservative leaders.

"We tell them where to eat and get information, and they sleep here temporarily, but they can't stay forever. This represents a total failure of the public administration," said Baeza, who confirms that there have been migrants at the church for the entire month of June. "We accompany them to the Red Cross almost every day, but the answer is always the same: no beds available."

Baeza claims that Madrid's City Hall has turned down the migrants too, saying there are no vacancies at the moment. "It's really worrying that a city like Madrid doesn't have the ability to shelter a few dozen people," he said. 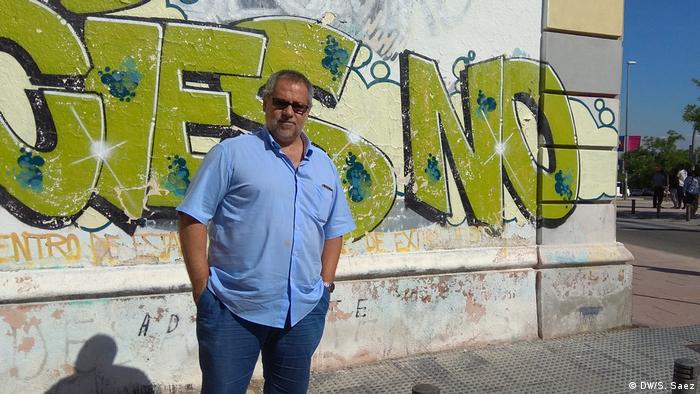 A local government spokeswoman admitted that "the shelter services have been at maximum capacity for a few weeks." She told DW that City Hall takes care of people who have nowhere to sleep, regardless of their nationality, and added that the current situation is a result of the central government's poor and slow handling of asylum requests. "City Hall has opened 300 additional vacancies that we usually only open during the cold months of the year," she said.

Many migrants think that reaching Spain is the end of the journey, but for the dozens that make it to the coast every day, numerous challenges remain. For Aliou, but also Lamine, who had to cut short his economics studies in Guinea. And for Claude, politically persecuted in Cameroon, who has nowhere to sleep while he waits for his asylum interview. And for Drissa, who's got a bad toothache but can't afford a dentist.