How fake news spread in the wake of the Las Vegas shooting | Americas| North and South American news impacting on Europe | DW | 04.10.2017

Soon after the mass shooting in Las Vegas, conspiracy theories began circulating online that spread much faster than legitimate news reports. The business of fake news appears to be booming. 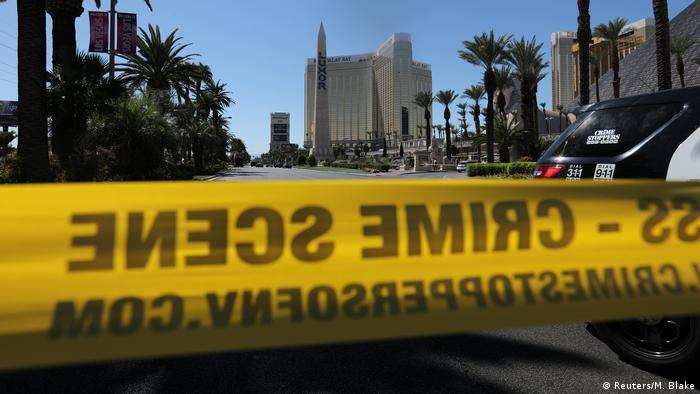 At least 59 people were killed and over 500 injured during the Mandalay Bay shooting in Las Vegas, Nevada. The gunman, Stephen Paddock, killed himself. According to officials, his motive is still unclear. Around the same time the news of killing spree broke, rumors and false stories began gaining traction online. These stories were clicked four times more often than fact-based reports by reputable media outlets. But why? Who actually benefits from this deluge of fake news and why does it spread so quickly?

Right-wing groups have speculated whether Paddock was an Islamist or a Trump-hating liberal. The website silenceisconsent.com openly debated whether he belonged to an anti-fascist organization.

Police say that Paddock was a lone gunman. Many social media conspiracy theories insist that at least two other shooters were involved in the mass killing. To prove their theory, groups like "The People's Voice" embed blurry user videos in their articles. It seems that the ambiguity and credibility of the material only play a secondary role.

In the case of the Las Vegas shooting, Silicon Valley giants Google, Facebook and Twitter have been accused of not putting enough effort into containing the flood of reports - and worse than that, facilitating their proliferation. People who were trying to find information on Google about the shooting were directed to the website 4chan, which falsely claimed that the attacker was Geary Danley, the ex-husband of Paddock's girlfriend. 4chan is known for spreading false information and conspiracy theories after mass shootings or terrorist attacks.

The rumor mills of right-wing sites like The Gateway Pundit were buzzing. Professional purveyors of fake news manipulated the algorithms set by Google, Facebook and other major internet sites, thus giving fake news broad media exposure. Yet only this summer, Facebook announced its intention to develop algorithms that detect false reports.

The business of lies

A lot of money can be made with fake news. A report published by the security software company Trend Micro revealed Darknet sites that offer fake news services. For $200,000 (170,000 euros), you can launch an agitational campaign that sparks public protest. For $55,000, you can discredit a journalist. The service packages usually offer fake profiles and groups in social networks, the fake content itself, and enough likes and retweets to spread the word quickly.

According to a study on fake news conducted by the London School of Economics and Political Science, online advertising is another source of revenue. Such advertising promotes visually appealing articles that generate large amounts of traffic. The veracity of the reports is of no importance. The programmed advertising scheme spreads automatically, which is why fake news reports on the Las Vegas shooting attract more online readers than reports by the New York Times.

Why is fake news successful?

In an interview with Germany's public broadcaster ARD, social psychologist Catarina Katzer said that people are processing information more and more superficially due to the abundance of material on news and social media sites. "We know that we only read 10 to 15 percent of the pages we access online. Everything else falls into a black hole," she said. This factor, combined with the alleged convenience of being able to verify the accuracy of reports, makes people susceptible to fake news.

"When we find things on the web, we always seek familiar cognitive structures or let them guide us," Katzer added, saying that this selective perception could explain why people believe fake news: people's existing views are merely validated.