In 2011, street artists used their creativity to voice dissent in Egypt as thousands of protesters clamored for a regime change in Cairo's Tahrir Square.

The Arab spring began over 10 years ago in Tunisia, when a young man set himself alight to protest rampant police corruption and unemployment. Soon, mass protests had spread across to neighboring Egypt, where thousands of people gathered in Cairo's Tahrir square, demanding that President Hosni Mubarak step down.

It was during this time that murals, paintings and graffiti emerged on the walls of Egypt's capital city, drawn by painters including Ammar Abo Bakr, Alaa Awad, Ganzeer and several other men and women, who became prominent for their artwork during the revolution. Many of these works have been documented in books like Revolution Graffiti – Street Art of the New Egypt by Swedish journalist Mia Gröndahl and Walls of Freedom:Street Art of the Egyptian Revolution by Basma Hamdy and Don "Stone" Karl.

The case for street art

Ganzeer, a prominent street artist who drew many murals in Cairo in 2011, told DW how street art began appearing on the city's walls. "With the outbreak of the revolution there was a gap between what was happening on the street and what was being expressed and reported in media, especially early on," he said.

According to him, at the beginning of the protests, the media was responsible for creating a very strong divide, communicating the idea that the people in Tahrir were "just a few aimless thugs, who didn't know what they wanted and were part of a conspiracy theory."

He said he felt that a lot of people who weren't participating, especially in the first couple of days from January 25 onward, had no idea that protests were going on. "It was with that that I sort of felt compelled to create street art," Ganzeer said.

A tool for expression

Ganzeer actually began drawing his murals far away from Tahrir Square, where people were barely aware of what was happening. Initially, however, the response to street art was not very positive. Once protests intensified, shops and businesses closed down in Cairo, and many common people expressed their discontent by defacing murals. But things changed.

For Ganzeer, and perhaps other street artists, painting on walls became a tool to express discontent with the regime. "In general, what was interesting about Cairo was that the walls were becoming more and more alive and you started to see the conversation that was happening in society being almost reflected on the walls," Ganzeer said. "It was a very exciting time, in the sense that if you landed in Cairo and knew nothing, by simply walking through the city, you could see everything on the walls."

Some particularly powerful images included Ganzeer's mural of a tank pointed at a boy riding a bicycle and carrying bread on his head.

Another famous mural by painter Omar Fathy at Tahrir Square depicted a face that was half-Mubarak and half-Tantawy, the head of Egypt's military forces in 2011. Many more murals were painted on the walls of Cairo's Mohamed Mahmoud Street, which became symbolic for clashes between protesters and security forces.

A document of the times

"Street art in January 2011 was one of the many ways through which the protesters communicated and represented the movement," said Sarah Awad, co-author of Street Art of Resistance and assistant professor of communications and psychology at the University of Aalborg in Denmark. "Images of the 2011 street art had strong resonance with varied audience; from pedestrians in Egyptian streets to international viewers following the happenings in Egypt." 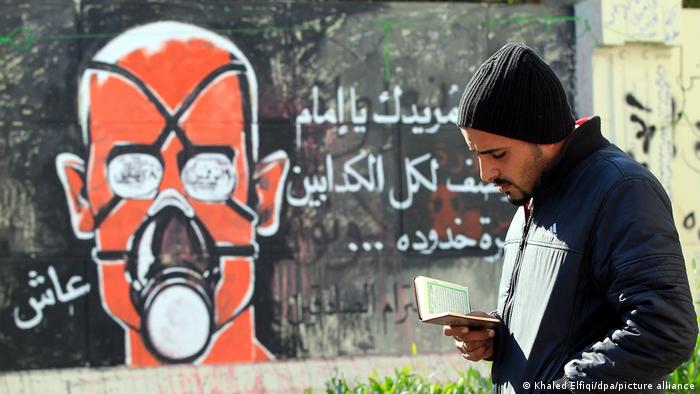 Street art served some very important functions, according to Awad. Protesters could express themselves and counter misrepresentation in local media, and shed light on the political dynamics of the time. The murals also exposed the transgressors and advocated rights for victims.

"Finally, these images today serve as a document for those times, from the voice of those who witnessed them, thus they form now part of the collective memory of the revolution that fights to persist in opposition to alternative official narratives," she added.

Meanwhile, many street artists, like Ganzeer, do not live in Cairo anymore and have moved to other cities or abroad. Ganzeer agrees that the situation in Egypt is depressing and that things haven't turned out the way they were planned, but there are pros and cons.

"On one hand, Mubarak was, in fact, unseated after 30 years in power and that's a major victory. During the first years, there was unprecedented freedom, people were expressing themselves freely. You had a free press that was not dictated by the state."

The negative side was that after the initial phase, people were killed and put into prison, he said, referring to the unrest during Morsi's rule and the brutal targeting of his followers by the military dictatorship in 2013.

Author Sarah Awad finds that street art has been on the wane in Egypt. Big murals that were symbolic of regaining public space became rarer as authorities gained control over the city, making it riskier to draw on the street. Political art is now limited to small, stenciled pieces that make it difficult to identify the artist.

Artists Awad has spoken to say they feel grief after the death and imprisonment of several people following the initial victory of the 2011 revolution. "Their general response to whether they would continue doing street art was 'not for now'," she said.

Street art in the Egyptian revolution