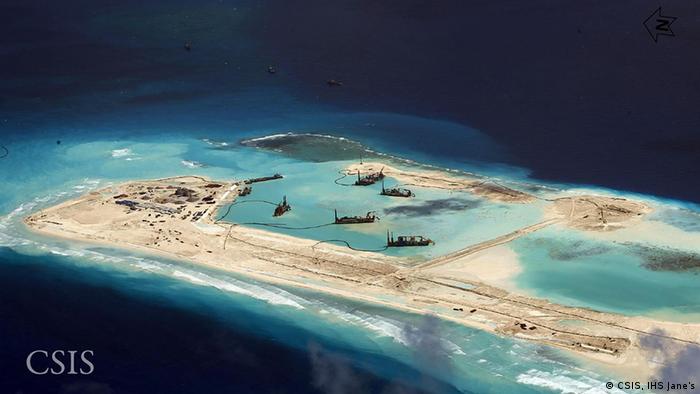 On February 4, the Philippines filed a diplomatic protest to the Chinese Embassy in Manila, urging Beijing to stop the land reclamation at the Mischief Reef. Manila argued that the dredging activities at the reef - located some 135 kilometers southeast of the Philippine island of Palawan - were in violation of its exclusive economic zone. But no photographs of the construction at the reef had been made publicly available until now.

Surveillance imagery obtained by the Center for Strategic & International Studies (CSIS), a Washington-based think tank, now shows the size and scope of China's building and land reclamation projects in the Spratly Islands, a highly contested area in the South China Sea.

The photographs, released on February 18, focus on six reefs claimed by China in the area - the Gaven Reef, Johnson South Reef, Fiery Cross Reef, Mischief Reef, Cuarteron Reef, Hughes reef - and reveal that the development of these features has taken place at a much larger scale and faster rate than expected, according to analysts. 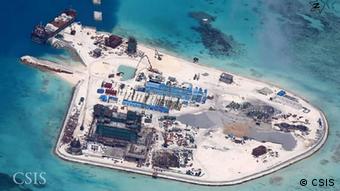 So far, the other claimants, especially Manila and Hanoi, have taken a strong line that such work violates the spirit of their 2002 Declaration of Conduct for Parties in the South China Sea. The Philippines, for instance, has protested China's actions, saying the artificially created land could be used to build an airstrip or an offshore military base in the increasingly volatile region.

But while the court takes time to decide, construction on the reefs goes on, with Beijing seemingly trying to change facts on the ground to make it more difficult, if not impossible, for the court to decide what the original status of these features - islands, rocks, or low tide elevations - may have been.

A clear example of this strategy can be found at the Johnson South Reef. Until early 2014, the only manmade feature at the reef was a small concrete platform that housed a communications facility, garrison building, and pier, according to James Hardy and Sean O'Connor, analysts at IHS Jane's Defence Weekly.

But the platform has now been surrounded by an island that is approximately 400 meters across at its widest points and has an area of about 100,000 square meters.

There has even been speculation that Beijing may build an airstrip on the reef, though some experts argue it would be too small to have a strategic impact. An airstrip also seems to be under construction on Fiery Cross Reef (main picture), the area of which has been increased eleven times in the past few months, growing from .08 square kilometers to .96 kilometers, according to CSIS.

Experts posit that the reef could eventually become a military base twice the size of Diego Garcia in the Indian Ocean, allowing it to serve as command-and-control center for the Chinese Navy.

The US think tank also reports that a new building on Gaven Reef, which is almost identical to one on Hughes Reef, includes a main square building with what appears to be an anti-aircraft tower. 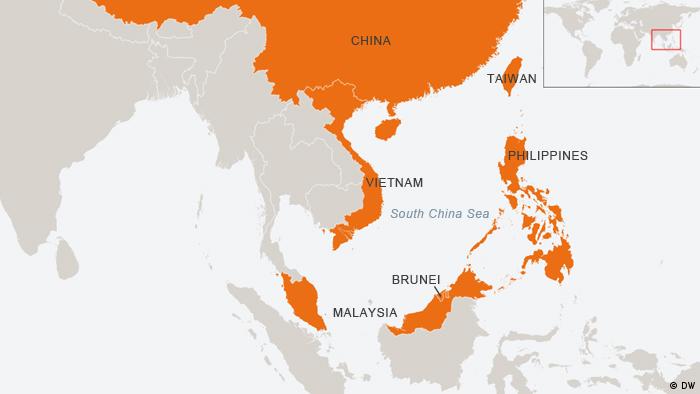 China's construction and reclamation work in the Spratlys is not new. Beijing began engaging in such work at Mischief Reef not long after occupying it in 1995. And when the country entered the Spratlys in the 1980, there was nothing left to occupy but low-tide elevations and submerged reefs with a couple of dry rocks.

How to make an island

Gregory Poling, Southeast Asia expert at CSIS explains that the basic process of expanding these features simply involves dredging sand from the seafloor and dumping it onto the shallow reefs around China's previously raised structures. "Little by little it is raised above the high water line, hiding the original status of the bank or reef beneath," he said.

The sand is then smoothed out using bull dozers and the like. Once the desired amount of reclaimed land is created, workers surround the island with a concrete barrier to protect against erosion and storm surge, and begin construction of new facilities - docks, helipads, military and civilian structures, and potentially small airstrips.

But why is Beijing doing this? According to Zachary Abuza, an independent researcher on Southeast Asian security, the purpose of the artificial islands is to give China the ability to enforce its claims to 90 percent of the South China Sea as part of its nine dashed line and force out other claimants.

"The highlands will give China much greater power projection capabilities, by serving as forward operating bases for their navy, Coast Guard and Air Force. They will also serve as facilities to support China's fishing and offshore oil exploration industries and extend both the country's range and time to work in the South China Sea," Abuza underlined.

In fact, China sent several oil rigs to the area last June in a bid to step up exploration of oil and gas in the potentially energy-rich waters.

"China is telling its neighbors that it intends to assert its so-called 'historic rights' to maritime resources such as oil, gas and fish within the nine-dash line, a line that the majority of international legal experts regard as being incompatible with the 1982 UN Convention on the Law of the Sea (UNCLOS), " Ian Storey, an analyst at the Singapore-based Institute of Southeast Asian Studies (ISEAS), told DW. 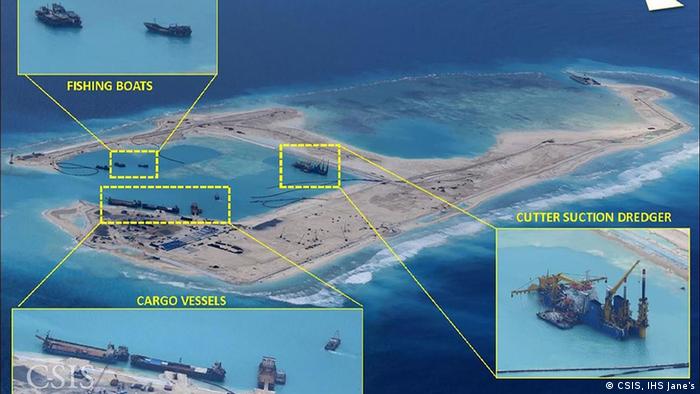 In this context, analyst Abuza points out that enforcement is a critical component of China's strategy. "If China can deny other countries the ability to fish and explore for hydrocarbons they are enforcing their sovereignty claim with or without their acceptance of China's nine dashed line."

There is also the concern that the Chinese government may use these features as military facilities to enforce a potential Air Defense Identification Zone (ADIZ). The Chinese unilaterally declared an ADIZ off their East Coast but were unable to enforce their declaration as the US military immediately challenged it.

This is why, Abuza argues, the Chinese first want to get their military capabilities in place before making a similar unilateral declaration over the South China Sea that they cannot enforce.

But CSIS expert Poling stresses that while the facilities at these artificial islands will allow China to exercise greater maritime patrol and aerial surveillance capabilities, they are unlikely to allow it to enforce any future ADIZ it announces.

"China was embarrassingly unable to prevent Japan, South Korea, and the United States from all violating the ADIZ in the East China Sea, and that was with the full capabilities of its air force based on the mainland. 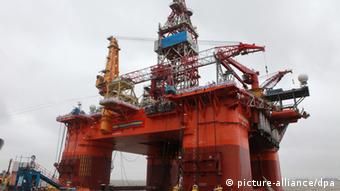 It is hard to imagine that it could ever sustain a large enough air presence on these tiny spits of land in the Spratlys to counter ADIZ violations from the surrounding states, as well as the United States," the analyst noted.

Beijing has so far ignored international protests, claiming that it's ownership of the South China Sea is indisputable. While the UN Convention on the Law of the Sea is explicit in stating that an exclusive economic zone cannot come from an artificial island, the Chinese point of view is that the law is "evolving," said Abuza.

This has not only angered neighboring states, but also led Vietnam and the Philippines in particular to deepen their diplomatic and military relationships with the US, Japan and India, which are increasingly concerned about the size, scope and speed of China's land reclamation. Analysts believe that Beijing's growing assertiveness may be drawing other nations in the region closer together.