After securing evidence of Nazi atrocities in concentration camps and serving as the youngest prosecutor in the Nuremberg Trials, the US lawyer helped found the ICC in the Hague.

Nuremberg trials – the trials that lead to the ICC

Benjamin Ferencz, who turned 100 in March, remains a fundamentally optimistic person. Although he witnessed atrocities as a US soldier in the Second World War, gathered evidence of Nazi war crimes after the war ended, and prosecuted Nazis in the subsequent Nuremberg Trials, his rosy outlook on life didn't change.

There is no point in drowning in a lake of tears, Ferencz says in the introduction to a forthcoming book about him. He holds that if you cry inside, it's better to laugh on the outside. The book, entitled Parting Words: 9 Lessons for a Remarkable Life, will be published in English on December 31, 2020.

Thanks to Ferencz's investigations, the prosecutors in the Nuremberg Trials, which opened on November 20, 1945, had sufficient evidence and documentation to prove the Nazis' crimes. The evidence was used against members of Hitler's inner circle, war criminals who included Hermann Göring, Rudolf Hess, Baldur von Schirach and others.

"Without Ferencz, this spectacular trial might not have taken place," Axel Fischer, historian and expert on the Nuremberg trials, told DW. 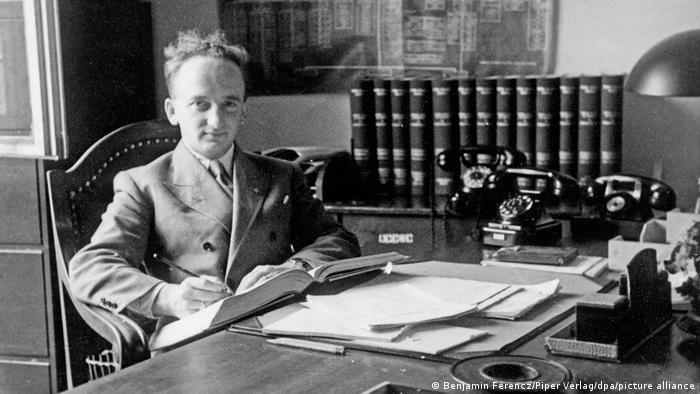 Ferencz has spent a lifetime dedicated to justice

Ferencz attended Harvard Law School on a merit scholarship. After graduating in 1943, he joined the US Army. His time as a soldier in the army began bleakly with a job as a typist in Camp Davis in North Carolina. At that time, he was not familiar with using a typewriter, and he couldn't fire a weapon. His job duties also consisted of unceremoniously cleaning toilets and scrubbing pots and floors.

Things got serious for Ferencz in the spring of 1944, when his combat unit was sent to the United Kingdom to fight in World War II. On June 6, 1944, D-Day, he and his comrades jumped from a landing craft and pushed toward Omaha Beach, on the northern French coast of Normandy. The Allied invasion had begun — and with it the end of Nazi rule. 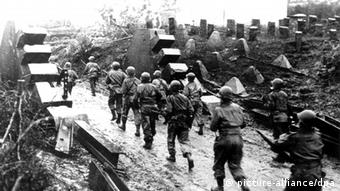 In June 1945, US soldiers broke through the Nazis' western line of defense

During the advance of the US troops, Ferencz and his unit broke through the Nazis' western line of defense, the Siegfried Line, fought on the front line of the Battle of the Bulge and crossed the Rhine river over the Remagen bridge in the spring of 1945. It was pure luck that he survived the war, he later said.

After the war, the army assigned him a job securing evidence of the Nazis' war crimes. Using his lawyer's eye, Ferencz and his team combed through documents found in SS and other Nazi offices and visited concentration camps that had been liberated by the US army. In Buchenwald, Dachau, Mauthausen and other camps he found hard proof of the Nazi's cold-blooded killing machine that went far beyond what he could have ever imagined.

In his memoirs, Ferencz recounts how important it was to secure evidence, such as lists of prisoners, the names of the camp administrators and the responsible SS figures. This was the basis he and his team used to issue arrest warrants. After securing all possible evidence at one camp, they would drive directly to the next.

Ferencz was not interested in revenge or retribution, despite his family being Jewish. For him, it was about justice.

He witnessed the first Nuremberg Trial, against the main Nazi war criminals, as a spectator. He recalls in his writings how at the trial's start, the rows were packed with people, but as the trial progressed, the seats emptied out as the Germans failed to keep up interest.

After being honorably discharged from the army, Ferencz returned to the US and began looking for a job as a lawyer, but he didn't search for long. He soon received a telegram from the Pentagon summoning him to see General Telford Taylor, an esteemed lawyer who had been appointed by President Truman as the person responsible for subsequent Nuremberg Trials that were to pick up where the first one had left off. Taylor immediately appointed Ferencz to his team. 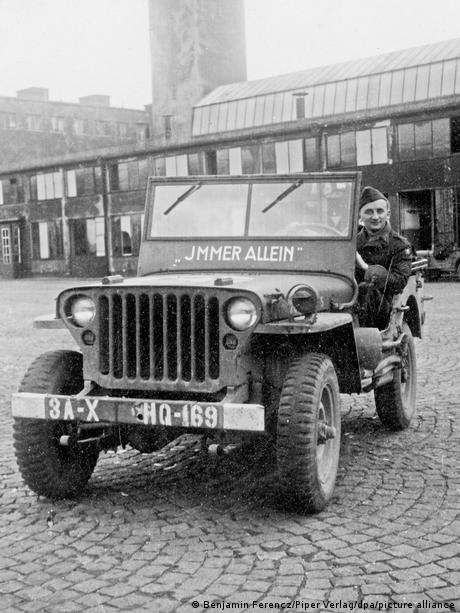 'A gold mine' of evidence

In the 2015 documentary A Man Can Make a Difference, by director Ullabritt Horn, Ferencz recalls how Taylor initially tasked him with going to Berlin and collecting evidence of the monstrous Nazi crimes. The US felt that the first Nuremberg Trial of the 22 top Nazis could not fully explain how crimes of that magnitude could have happened in a civilized country like Germany, he says in the film.

The US investigative team was headquartered in the war-ravaged capital of Berlin. The city had already been divided into separate sectors by the four occupying powers: the US, the UK, the USSR and France. Each had its own criminal prosecution methods.

Nevertheless, Ferencz and his 50-person team were given free rein to secure vast amounts of documents and incriminating evidence from the extensive Nazi bureaucracy. The Berlin Gestapo headquarters particularly proved to be a haven of German thoroughness. Ferencz describes it as "a gold mine" in the documentary, adding that he and his team systematically searched all Nazi archives.

Chief prosecutor in the 'Einsatzgruppen Trial'

In the spring of 1947, a team member happened to come across three thick folders in the filing cabinets of the foreign office labeled "Event dispatches from the Soviet Union — Reports from the Eastern Front." They ended up being reports from SS special units disguised under the name "Einsatzgruppen," the term used to refer to SS mobile death squads. But, as Ferencz recalls, no one knew what those were at the time. 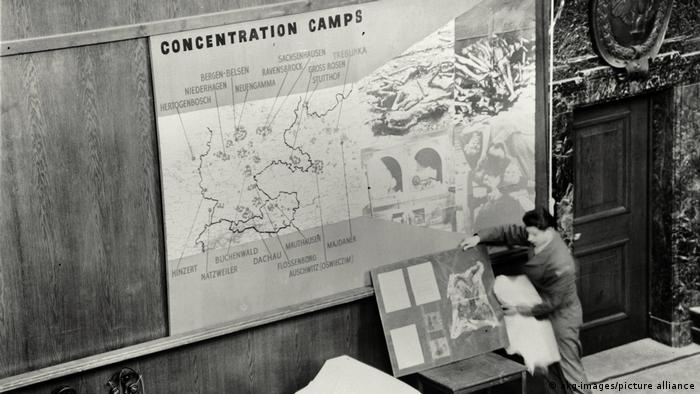 Ferencz discovered detailed lists of a murderous program the SS used to kill hundreds of thousands of Jews, Sinti and Roma people in Eastern Europe. He quickly recognized the importance of the find.

These pieces of evidence provided the legal foundation for one of the largest murder trials in history: On September 15, 1947, Ferencz made his opening statement in Room 600 of the Nuremberg courthouse. At age 27, he was the youngest chief prosecutor involved with the twelve subsequent Nuremberg Trials. The defendants were 24 men from the "SS Einsatzgruppen," representing a total of 3,000 members.

In the end, only four of the court's death sentences were carried out. Many of the Nazi criminals in East and West Germany served short prison sentences, and some were released early. The Cold War between the Eastern Bloc and the Western powers had begun, putting the horrors of World War II in the shadows. 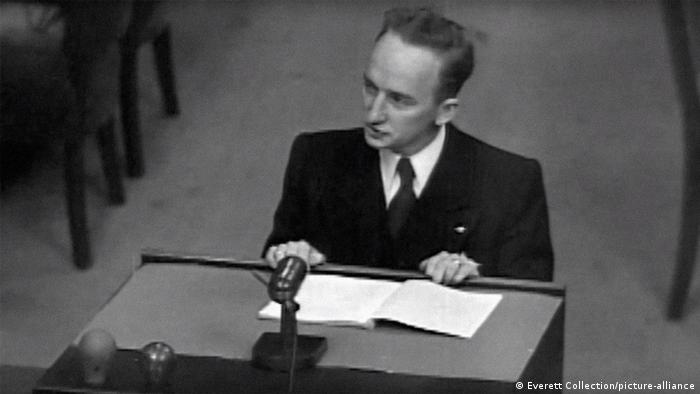 Initiative for the International Criminal Court

Ferencz's experiences in postwar Germany were formative. As an authorized representative of the Jewish Claims Conference, he later worked tirelessly for the reparations agreement between Israel and West Germany, which was signed in Luxembourg in 1952.

His persistence and experience with the Nuremberg Trials also led to the founding of the International Criminal Court (ICC)in T he Hague in 2002. Thetribunal prosecutes individuals for war crimes; even heads of state are held legally accountable.

Ferencz is "a man of conviction, a principled man," says Fatou Bensouda, the ICC's current chief prosecutor, in the 2015 documentary. "He is not only doing it, but he is passionate about it."

In 2010 Ferencz was awarded one of the Commanders Crosses of the Order of Merit of the Federal Republic of Germany for his lifelong commitment to international law.

On November 20, 2020, to mark the celebration of the 75th anniversary of the Nuremberg Trials, Ferencz will speak in a video message. As a sign of respect, German President Frank-Walter Steinmeier will speak after him.

The 93-year-old defendant has rejected any guilt throughout the trial, but admitted knowing about the gas chambers in the Stutthof death camp. Prosecutors said that he choose to "look away" instead of leaving his post.

Nuremberg trials – the trials that lead to the ICC