A fifth person tied to a Hong Kong publishing house has gone missing, prompting concerns of abduction to mainland China. The publishing house is known for its books critical of the Communist Party. 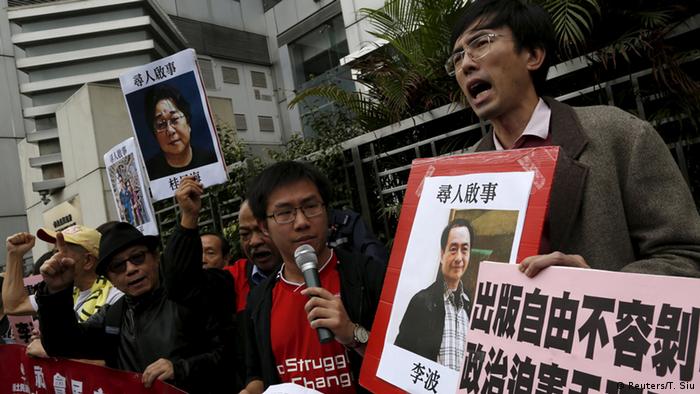 Pro-democracy lawmakers in Hong Kong expressed concern on Sunday after another person associated with a bookshop and publishing house that sells publications critical of the mainland government "vanished" earlier last week.

Lee Bo, an employee at the Mighty Current publishing house and shareholder of Causeway Bay Books, went missing on Wednesday after going to retrieve books from the company warehouse, local media quoted his wife as saying.

Lee's wife said she had received a phone call from her husband telling her that he was safe, but he did not provide any more information. She said he called from a number in Shanghai and spoke in Mandarin, even though the two usually speak with each other in Cantonese.

Lawmaker Albert Ho of the Democratic Party said Sunday the city was "shocked and appalled" by Lee's apparent disappearance, the fifth person in recent months to vanish from the bookstore.

"We have strong reason to believe Mr. Lee was kidnapped and smuggled back to the mainland for political investigation," said Ho.

Others who have gone missing include Gui Minhai, the owner of Mighty Current, the publishing house that that owns Causeway Bay Books. Three other employees have also apparently disappeared.

Police have launched an investigation into the disappearances.

On mainland China it is not unusual for political dissidents or business executives to go missing as authorities conduct questioning. However, the practice is unheard of in Hong Kong, which enjoys special status with levels of press freedom and political rights unknown on the mainland.

The publishing house is known for publications critical of the Communist Party, including juicy details into the personal lives of officials.

The publications are banned on the mainland but are known to be popular among Chinese tourists visiting Hong Kong.

Ho, the opposition lawmaker, said he understood the publishing house may have been preparing a book looking into the earlier love life of Chinese President Xi Jinping.

"To my knowledge... the book concerns the story about the girlfriend...(from) some years ago," he said. "There were warnings given to the owners not to publish this book. This book has not yet gone to print, but probably it has something to do with this book," Ho added.

A Chinese court has convicted a media head of extortion and ordered publications closed. His newspaper supposedly blackmailed businesses into giving them sums of money by threatening to write negative stories about them. (24.12.2015)

Russia accuses Germany of spreading misinformation on Navalny 1h ago