In a bid to renew their lost 'Lion Rock Spirit,' pro-democracy activists in Hong Kong unfurled a banner demanding "genuine universal suffrage" on the local hill of the same name. Protests began almost a month ago. 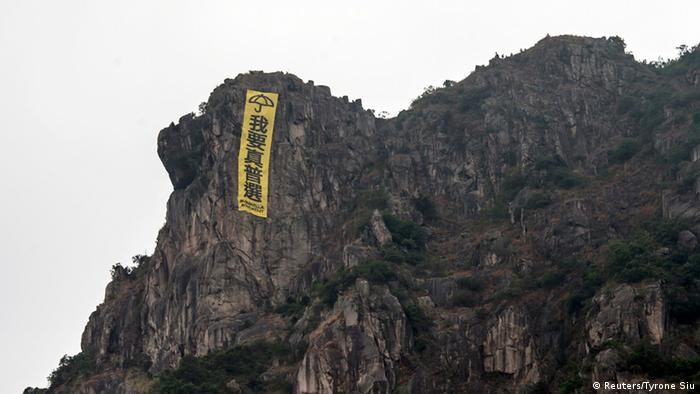 In the latest wave of protests in the Asian financial hub, a group of Chinese demonstrators on Thursday unfurled a huge banner on Hong Kong's famous "Lion Rock," which overlooks many poor neighborhoods across the region's harbor.

The stunt came following comments made by Hong Kong Chief Executive Leung Chun-ying on Monday when he claimed that full democracy would give the poor too much power.

The 28-meter-long (30.6-yard-long) yellow banner, emblazoned with the slogan "I want genuine universal suffrage" and a picture of an umbrella, which has become the symbol of pro-democracy protesters, was hung by a climber wearing a Spiderman suit.

"The small circle electoral committee (who voted for Leung in 2012) and the Chief Executive only care about the rich on Tai Ping Shan and not the poor under Lion Rock," said the disguised protester who, according to police, was one of 10 climbers belonging to the group who call themselves "Hong Kong Spidie." 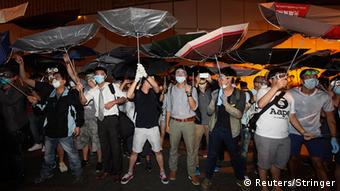 'Umbrella Revolution': Protests have been going on for almost a month

Tai Ping Shan is the local name for Victoria Peak, the famous hill that dominates Hong Kong Island and is home to some of the world's most expensive properties.

Associated with "Lion Rock" is the concept of "Lion Rock Spirit" - a phrase which has been adopted by Cantonese speakers to encapsulate Hong Kong's reputation as a place where hard work and perseverance meant a brighter future.

However, many among Hong Kong's youth feel that the city's "Lion Rock Spirit" has been stifled by the political elite. Faced with rising inequality and soaring housing costs, many young Hong Kongers are left with little hope of renting, let alone buying, their own home in a city with one of Asia's widest wealth gaps.

One month of protests

On Tuesday talks began again between government officials and leaders of the student protest movement. However, hopes remain low for any breakthrough. Beijing believes it has offered enough concessions to the former British colony in the past and sources say it will not change its position.

Pro-democracy campaigners have now been protesting in Hong Kong for almost a month, where they continue to demand a free choice of candidates to become the city's chief executive in the 2017 election. China's National People's Congress decided in August that any candidates would have to be vetted by Beijing before appearing on the ballot.

Hong Kong has experienced a fourth night of violent clashes between pro-democracy protesters and police. The demonstrators still occupy some of the city's most important thoroughfares. (19.10.2014)

Pro-democracy demonstrators in Hong Kong have reoccupied a camp in the Mongkok area hours after it was mostly cleared by police. More than 20 people were arrested in overnight scuffles. (18.10.2014)