Pro-democracy demonstrators in Hong Kong have reoccupied a camp in the Mongkok area hours after it was mostly cleared by police. More than 20 people were arrested in overnight scuffles. 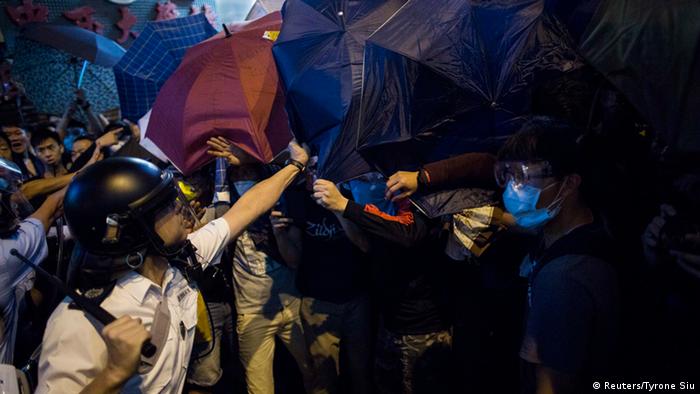 Some 9,000 pro-democracy protesters in Hong Kong clashed with police overnight to Saturday as they succeeded in taking back a camp in the bustling Mongkok district. Police had cleared most of the site early on Friday.

Riot police used batons and pepper spray in a bid to disperse the crowds, but were forced back around dawn by the masses of demonstrators, many of whom wielded umbrellas to protect themselves.

Police said in a statement that they had arrested 26 people, and that 15 officers had sustained injuries.

Those arrested included a photographer for Getty Images, Paula Bronstein. The Foreign Correspondents Club of Hong Kong condemned her detention under "suspicion of criminal damage," and accused authorities of threatening journalists attempting to cover the protests.

It was the third consecutive night of violence in the city, which has seen weeks of demonstrations calling for fully free elections to elect a leader for the former British colony in 2017, and for the resignation of current leader Leung Chun-ying.

China, which had promised "universal suffrage" at the elections, announced at the end of August that candidates for the poll would first be vetted by a committee that critics say is stacked with pro-Beijing loyalists.

On September 28, the pro-democracy activist group Occupy Central, together with protesting students, carried through with a long-standing threat to take over central Hong Kong.

On Thursday, Leung said the government was prepared to start talks with student leaders next week, but stressed that Beijing's stance on the 2017 elections remained the same.

China took back Hong Kong from Great Britain in 1997 under a 1984 agreement stipulating that the financial hub should enjoy a relatively high degree of autonomy in comparison with the mainland.