In Hong Kong, a meeting between government officials and the leaders of a student protest movement has begun. A breakthrough is not expected, but the government has indicated possible concessions. 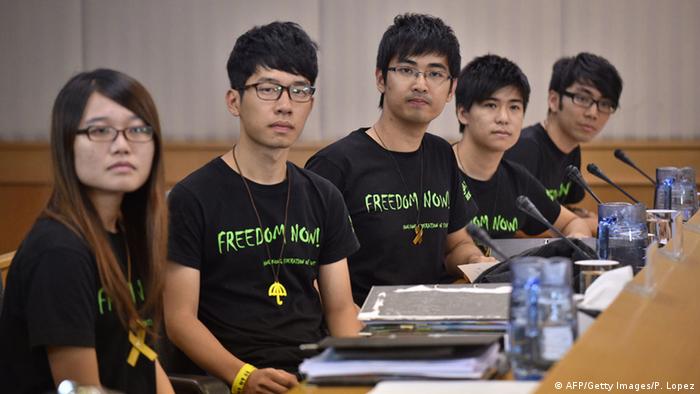 Just before the start of Tuesday's talks in Hong Kong, the city's Chief Executive Leung Chun-ying told reporters that there is "room for discussion" regarding protesters' demands that election candidates should be directly selected by the public, rather than being vetted by a 1,200-member committee.

"There's room to make the nominating committee more democratic, and this is one of the things we very much want to talk to not just the students but the community at large about," Leung said.

Leung did not take part in the discussions that immediately followed between Hong Kong officials and student protest leaders. 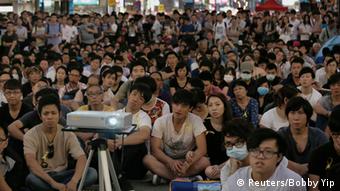 Many demonstrators are watching the meeting on public viewing screens

Giant screens have been set up in protest zones to beam the talks live to demonstrators.

"This is a historic moment because it's the first time ever in Hong Kong that a group of protesters are able to sit on an equal footing with the government, to say: 'we don't agree with you, we want democracy'," said Nathan Law, a member of the Hong Kong Federation of Students.

The student protest leaders (pictured above) and the government have sent five representatives each to the talks. However, hopes remain low for any breakthrough. Beijing believes it has offered enough concessions to the former British colony in the past and will not change its position, sources say.

Talks between the Hong Kong government and student pro-democracy demonstrators are scheduled to take place on Tuesday. The planned discussions could reduce tensions after days of violent protests. (19.10.2014)

Journalists in Hong Kong have written an open letter criticizing their own television station. They say the station edited video material, whitewashing a case of police brutality against a protester. (18.10.2014)