Hong Kong has experienced a fourth night of violent clashes between pro-democracy protesters and police. The demonstrators still occupy some of the city's most important thoroughfares. 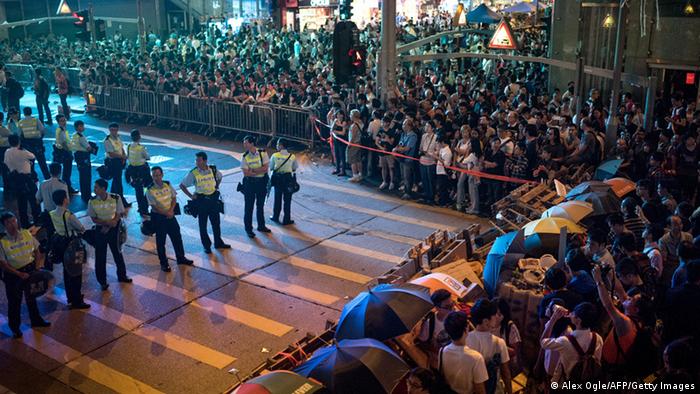 About 20 people were injured early on Sunday in new clashes between pro-democracy protesters and police in Hong Kong as authorities continued their attempt to clear demonstrators from key parts of the city.

The injuries occurred as police used batons in an attempt to drive back demonstrators gathered at barricades in the Mongkok district, with some protesters being carried away on stretchers.

In a statement, police claimed to have used "minimum force" in their efforts to clear a key thoroughfare, Nathan Road, of protesters, alleging that the demonstrators had charged cordons.

"We believe police have violated the principle of using minimum force to deal with a peaceful demonstration," James Hon, an activist from the League in Defence of Hong Kong's Freedom, told the AFP news agency.

He added that police could end up severely injuring or even killing protesters by using their batons in the way they had during the clashes.

Protesters are calling for fully free elections for Hong Kong's leader in 2017, after China announced at the end of August that all candidates in the poll would be vetted by a committee widely seen as pro-Beijing.

The renewed violence comes after Hong Kong's government announced that it would hold two hours of televised talks with student leaders on Tuesday.

The city's deputy leader, Carrie Lam, told reporters that the talks, attended by five members from each side, would focus on constitutional reform.

Hong Kong Chief Executive Leung Chun-ying has made it clear, however, that Beijing will not revoke its decision.

Tens of thousands of people have taken to the streets several times over the past weeks to protest against Beijing's announcement and call for the resignation of Leung.

On September 28, the pro-democracy group Occupy Central began to carry out its long-standing threat to lock down key parts of the financial hub, riding on the back of previous student-led rallies. Since then, protesters have occupied several major city instersections.

Hong Kong was handed back to China by the United Kingdom in 1997 under an agreement that foresaw the former British colony being granted a degree of autonomy unknown on the mainland for a period of 50 years.