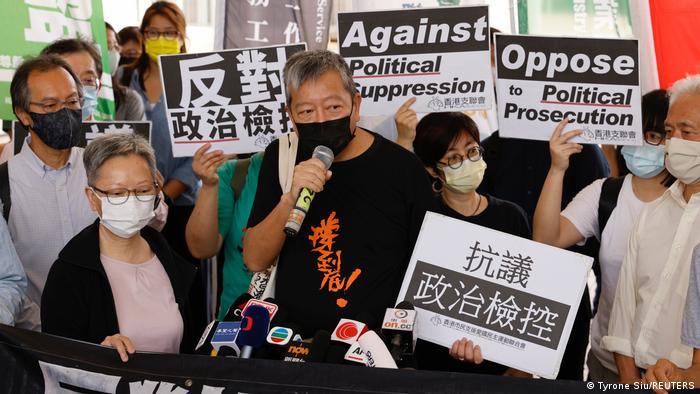 Seven pro-democracy activists have been found guilty of organizing a 2019 rally that saw nearly 1.7 million people out on the streets.

Hong Kong's pro-democracy movement suffered a heavy blow on Thursday when nine veteran activists were convicted over a massive rally in 2019.

"We will continue the struggle," said Lee Cheuk-yan on Thursday.

The activists were convicted for their involvement in a massive protest held on August 18, 2019, where nearly 1.7 million people marched against a proposed bill that would allow for criminal suspects to be extradited to mainland China for trial.

Democrats under the scanner

Martin Lee, often called Hong Kong's "father of democracy," helped launch the former British colony's largest opposition Democratic Party in the 1990s. He could be jailed for 12-18 months, according to some legal experts.

Media entrepreneur Lai was arrested in August after some 200 police officers raided the newsroom of his Apple Daily tabloid.

He has already been charged on suspicion of colluding with foreign powers and endangering national security.

Lai is one of several Hong Kong pro-democracy activists who have been charged under the recently approved national security law. The law was passed in June last year by pro-Beijing lawmakers in Hong Kong and is seen by many as a means of cracking down on dissent.

The activists, apart from those who have been remanded in custody on other charges, were granted bail on condition they do not leave Hong Kong. They must all relinquish their travel documents.

Mitigation pleas will be heard before sentences are given when the group next appear in court on April 16.

Taking part in an unlawful assembly in Hong Kong can result in up to 10 years in prison.

He believes that there is "a quite high" possibility that convictions will follow for 47 pro-democracy politicians and activists charged with subversion after participating in an election primary.

Convictions, such as those on Thursday, show that the rule of law in the territory "is all gone under the national security law. People's freedom of expression and freedom of association are being annihilated."

Despite describing the democracy movement in Hong Kong as experiencing a "low time," he told DW he thinks it will survive, with many pro-democracy activists being "mentally prepared" to face jail.

On the eve of Thursday's ruling, DW's Taipei correspondent, William Yang, conducted an interview with Lee Cheuk-yan, who remained defiant, despite the prison threat, as he said: "They can jail us, but they can’t jail our spirit."

With many suggesting Hong Kong is becoming like China, 64-year-old Lee, a former legislator who has be an activist across four decades, said there is still hope.

"We are getting very close to the system of China but not yet," he said. "We must hold on to the very narrow space that we have. Although things are getting very difficult in Hong Kong and it seems that both the legal system and political system are looking more like the ones in China, I think we still have a very strong civil society and we need to hold onto that."

Finally, Lee called on the international community "to fight for values and fight for what you believe in, not to compromise for the sake of economic return. I think for the people in Hong Kong, we will keep fighting, we will keep the spirit going and keep lighting the candles to show the way forward even in a very dark tunnel. We hope the world can see our light and stand with us."

Beijing is hoping to bring in a "patriotic" government in Hong Kong after months of pro-democracy rallies.

The G7's concerns came after China's parliament passed reforms to change the electoral system in Hong Kong so that only "patriots" run the city.

Eight activists from Hong Kong who tried to flee the city by speedboat last year have been released after completing jail terms in mainland China.