The British lawyer, David Perry, stepped down as lead prosecutor in the upcoming trial of nine activists, including media mogul Jimmy Lai. Perry's involvement sparked a widespread outcry over legal ethics in the UK. 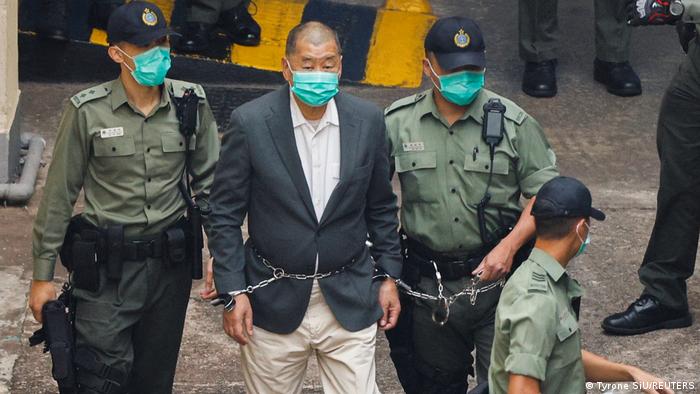 A British prosecutor hired by the Hong Kong government has pulled out of leading a team to prosecute a group of prominent Hong Kong dissidents, the city's Department of Justice said on Wednesday, following growing criticism in Britain.

The case against the activists relates to unlawful assembly charges handed down during the 2019 pro-democracy protests. Lai has since been charged with offenses under the city's sweeping security law implemented by Beijing.

Perry's involvement sparked a widespread outcry in the UK, calling into question whether British lawyers should be involved in helping Beijing's ongoing crackdown on dissent in the global financial hub.

The Department of Justice said "growing pressure and criticism from the UK community," as well as the city's lengthy quarantine requirements during the coronavirus pandemic had led to Perry stepping down.

"Mr. Perry, QC, expressed concerns about such pressures… and indicated that the trial should proceed without him," the department said, adding that criticism of Perry's role in the trials was "ill-informed."

British Foreign Secretary Dominic Raab told Sky TV in an interview on Sunday that Perry had handed the Chinese government a "PR coup" and had behaved in a "pretty mercenary way."

"I understand in the case of Mr. Perry, in relation to the pro-democracy activists, and of course from Beijing's point of view, this would be a serious PR coup," Raab said.

Perry has regularly worked for the Department of Justice to prosecute high-profile cases.

The department said it has hired another lawyer to prosecute the case, but did not identify the lawyer's nationality.

Under Hong Kong's independent Common Law-based legal system, foreign lawyers can be used by both the defense and prosecution. Foreign judges are also able to work in the city's top court.

Lai, 73, owns the Apple Daily – a newspaper known for being critical of Hong Kong officials. He is among the highest-profile figures to be charged under the  national security law, which Beijing imposed in June of last year to prosecute "secession, subversion, terrorism and collusion with foreign forces."

Critics have said the law has been used as a method to quash dissent and criticism of Beijing authorities. Nearly 100 people have been arrested since the law was implemented — some of whom could face life sentences if convicted.

A total of 11 people have been arrested, linked to a daring escape attempt from Hong Kong to Taiwan. It follows recent mass arrests of pro-democracy activists by police in the semi-autonomous territory.