More than 600,000 people took part in Hong Kong's pro-democracy party primaries over the weekend. The legislature of the Chinese Special Administrative Region will be newly elected in September. 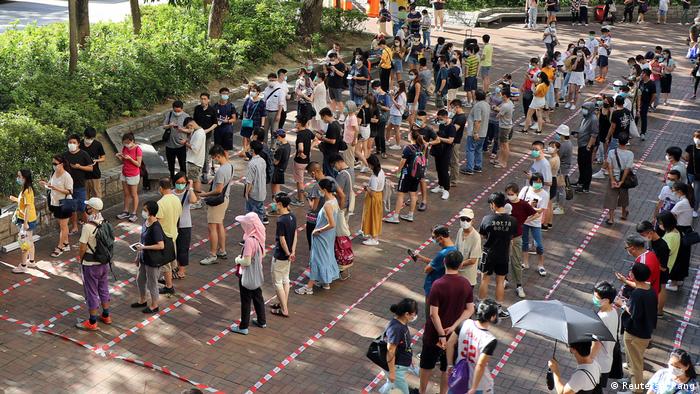 What were the elections about?

The Hong Kong primaries were held to select the most promising candidates from the democratic parties for the elections to the Hong Kong legislature in September 2020.

What makes the primaries so special?

The worsening coronavirus crisis overshadowed the primaries, with about 113 new infections in the past seven days (equivalent to about 1.7 new infections per 100,000 inhabitants). But voters were not deterred. Photos showed disciplined voters keeping a minimum distance of 1.5 meters, in long, orderly lines. The majority, however, voted online.

Additionally, the vote took place after the introduction of the controversial national security law, which severely restricted Hong Kong's autonomous rights. Three days before the elections, the Chief Justice and Mainland Affairs Officer, Erick Tsang Kwok-wai, warned organizers and voters that the vote could potentially violate the law.

The organizers saw it differently, however. The Hong Kong government said that it wanted to reduce turnout in advance, and according to the pro-democracy parties, a high turnout would have also marked a potential move against the law.

Who organized the elections?

The political association "Power for Democracy" organized the primary elections. The election manager was Benny Tai, a democracy activist and professor of law at Hong Kong University (HKU). The association is a registered organization with the pro-democracy parties in Hong Kong. According to its statutes, all citizens in Hong Kong are entitled to vote.

How high was the turnout?

According to the election officer, 613,000 people cast their votes last weekend, most of whom did so online. The votes are still being counted. The official results are not expected until Monday evening.

When will the Hong Kong legislature be elected?

A new Hong Kong parliament — the Legislative Council of Hong Kong (also known as LegCo) — will be elected in September. Half of the 70-member body is directly elected, while the other half is appointed by socially influential associations of lawyers, financiers and trade unions.

Beijing has not yet allowed all seats to be directly elected, although the Basic Law of Hong Kong allows for it. However, the Basic Law lacks specific time limits, and the influential head of administration is appointed by a pro-Beijing commission.

Does the opposition have a chance of getting a majority in parliament?

Mathematically, yes. The goal of the pro-democracy parties is "35+," which would allow them to win the majority in parliament. Such an outcome is possible if their candidates win in all constituencies, but is just as unlikely as the appointment of democracy-minded representatives who are sent directly to the Legislative Council.

Amid increased tensions between the two superpowers, the US State Department has issued a formal warning for US citizens in China. It said Americans may face deportation or detention without explanation. (12.07.2020)

In light of a controversial security law, Germany's Green Party has called on the government to end an extradition agreement with Hong Kong. There is "good reason" Germany has no such deal with China, a lawmaker said. (13.07.2020)