Hong Kong and China: How football became a vehicle for protest – but for how long? | Sports | German football and major international sports news | DW | 21.07.2022

Hong Kong and China: How football became a vehicle for protest – but for how long? 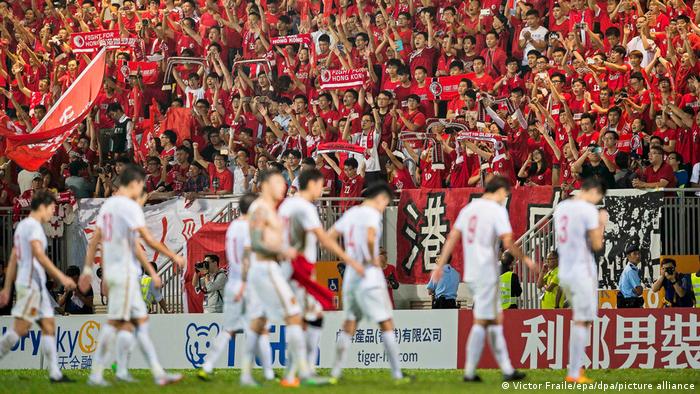 More than just a game: Hong Kong fans have long used football as a protest vehicle

On July 27, Hong Kong will play China in the East Asian Football Federation (EAFF) Championships in Japan. It's a low key game in a relatively low key tournament but, in recent years, meetings between the two national teams have been anything but.

In November 2015, with memories of the Umbrella Movement – widespread pro-democracy protests calling for more transparent elections in Hong Kong from September to December 2014 – still fresh, the Chinese national team came to the Mong Kok Stadium.

When the "March of the Volunteers," the national anthem for both teams, was played, some Hong Kong fans turned their backs and booed. The game finished 0-0, but the home fans had certainly achieved their goal.

Over four years later, it was still happening. In November 2019 against Cambodia, Hong Kong's last home game played before COVID-19 shut down sports in the "Special Administrative Territory" as well as mainland China, Hong Kong fans once again booed the anthem.

All this has come against a background of increasing tension between the former British colony, which was returned to Chinese control in 1997, and Beijing.

"No matter what one's political leaning may be, there is no doubt that China's control over the Special Administrative Region has increased, and Beijing's presence in day-to-day politics has also become more visible,"  Tobias Zuser, Lecturer and Researcher in the Sociology of Sport, Cultural Policy and Digital Media at the Chinese University of Hong Kong, tells DW.

"Over the last few years we have seen major changes in Hong Kong's legal framework," Zuser adds, citing new laws that eventually came into effect in 2020. Among them is the National Security Law which, among other things, makes it easier for Beijing to persecute pro-democracy protesters in Hong Kong.

The booing at football games specifically produced the "National Anthem Law" which threatens those who "disrespect" the anthem with a jail sentence of up to three years and substantial fines.

Pro-democracy forces both inside and outside Hong Kong greeted the new law with dismay.

"But today the Hong Kong authorities have again insulted the right to freedom of expression in their latest attempt to criminalize peaceful dissent." 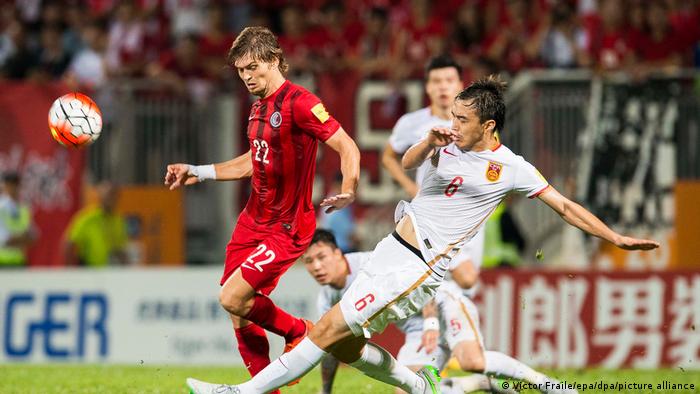 'Marching to the stadium together was emotional'

For those who oppose Beijing's tightening control over the territory, football was a rare arena in which that opposition could be expressed relatively safely.

"Marching to the stadium together with other protesters was emotional and we felt a connection in booing," one protester tells DW on the condition of anonymity.

"There are not many ways [to protest] apart from taking to the streets – and that has become more difficult and dangerous – where we could say or shout how we feel to Hong Kong and to Beijing. That this was happening at an international sporting event made it more powerful and meaningful for us."

Mark Sutcliffe was the head of the Hong Kong Football Association from 2012 to 2018 and confirms that, during that time, the national team became a more visible vehicle for the expression of local identity.

"It certainly did for a certain proportion of the population," he tells DW. "We had people coming to matches to make a political point rather than for football. The booing caused us problems with FIFA and it was a bit of an embarrassment for the Hong Kong Government."

The final whistle for footballing protest?

Due to the pandemic, there have been no international games held in Hong Kong since 2019 and therefore no further incidents. Strict travel restrictions are also still in place, and expected to be in place, for the foreseeable future, reducing the likelihood of international football matches taking place in Hong Kong.

When normality finally returns however, it does not mean that the booing will too.

"There will be less political activism at games, and probably even the booing will stop, due to the new National Anthem Law," predicts Zuber. "Some form of protest may still appear, but if so then in very subtle ways that would be difficult to decode for outsiders." 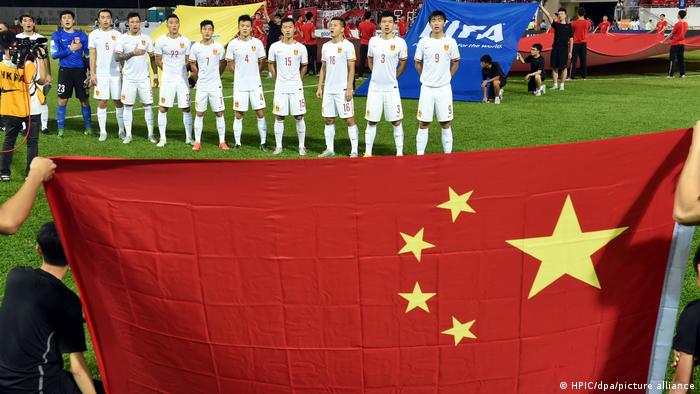 Nevertheless, the national team is likely to remain an important source of pride especially as, in June, Hong Kong qualified for the Asian Cup, the continent's biggest and most prestigious football tournament, for the first time since 1968.

It is due to be held in 2023, originally in China, although it will now take place elsewhere after Beijing decided that it could not stage the event due to COVID-19 concerns.

"It is very important for a number of reasons including FIFA ranking points, players gaining experience and playing at a higher level, and as a stepping stone to the World Cup," says Sutcliffe.

Hong Kong at the World Cup would not go down well with China, and if football continues to be an avenue for dissent then it could end up spelling the end of the team.

During Sutcliffe's time, he said that the relationship with Beijing was not close but he predicts that will change. "Personally, I think it's only a matter of time before the Hong Kong FA is swallowed up into the Chinese FA, but I can't put a time scale on it."

As always, it is not just about what happens on the pitch; "it's both a governmental issue and a football issue."