Prominent Holocaust survivors, including Germany's Charlotte Knobloch, have joined a global campaign to pressure Facebook to crack down on content that denies the Nazi genocide of Jews. 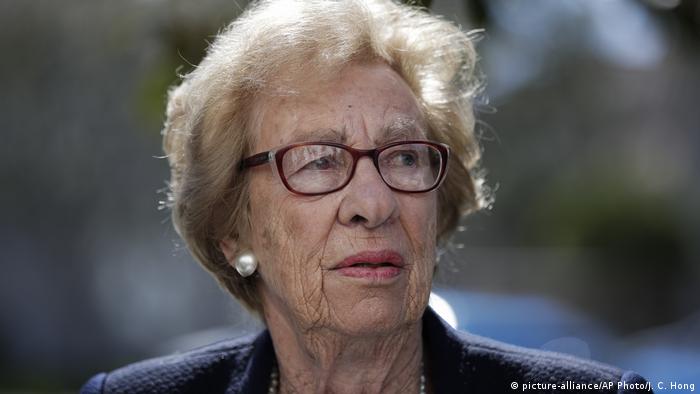 Holocaust survivors on Wednesday launched an online campaign calling on Facebook CEO Mark Zuckerberg to remove posts from his social media platform that deny the Nazi extermination of 6 million Jews.

The #NoDenyingIt campaign said it would upload a video featuring a survivor's account every day to Facebook to lobby for denial posts to be classed as hate speech and banned.

Coordinated by the New York-based Conference on Jewish Material Claims Against Germany, the videos will also be posted to Twitter and Facebook-owned Instagram.

Zuckerberg, who is himself Jewish, sparked an outcry in 2018 when he told the tech website Recode that Facebook should not itself remove posts from Holocaust deniers or block them. He said that he found such content "deeply offensive," but "at the end of the day, I don't believe that our platform should take that down because I think there are things that different people get wrong."

Zuckerberg later issued a clarification following the backlash, saying: "I absolutely didn't intend to defend the intent of people who deny [the Holocaust]."

Under its policy, Facebook takes down such posts in countries such as Germany, France and Poland where Holocaust denial is illegal. Elsewhere, content is monitored and only removed if it breaches the platform's standards, for example by straying into hate speech or incitement to violence.

"We take down any post that celebrates, defends, or attempts to justify the Holocaust," Facebook told the Associated Press.

"The same goes for content that mocks Holocaust victims, accuses victims of lying about the atrocities, spews hate, or advocates for violence against Jewish people in any way. Posts and articles that deny the Holocaust often violate one or more of these standards and are removed from Facebook."

The Claims Conference, an association of Jewish organizations which negotiates compensation claims from Germany for Holocaust victims, said the #NoDenyingIt project aimed to show that denial of the genocide violates Facebook's guidelines.

"In Germany or in Austria people go to prison if they deny the Holocaust because they know it's a lie, it's libel," survivor Eva Schloss told The Associated Press. The 91-year-old's video message for Zuckerberg was posted to the campaign's pages on Wednesday.

Schloss fled her home city Vienna for the Netherlands before the war — growing up in the same building as Anne Frank; her mother would marry the famed diarist's father, Otto Frank, after the war — but her family was eventually rounded up and sent to Auschwitz in 1944. While Schloss and her mother survived the death camp, her father and brother were killed.

"How can somebody really doubt it? Where are the 6 million people? There are tens of thousands of photos taken by the Nazis themselves. They were proud of what they were doing," she said.

Facebook has also come under fire from US civil rights groups, which organized an advertising boycott of the platform earlier this month. More than 400 brands signed up to the campaign to push for more concrete steps to block racist posts and hate speech from the site.

Prominent German Jewish leader Charlotte Knobloch, who survived the Holocaust by going into hiding as a young girl, said she was participating in the #NoDenyingIt campaign because many younger generations rely on social media platforms to get their information. Therefore, social media companies "have a particular responsibility," she told AP.

The US social media giant has been found guilty of failing to fully report the number of complaints it received, in clear violation of German transparency laws. Facebook may appeal the ruling, saying the law is unclear.