Bundesliga club Hertha Berlin have parted company with goalkeeping coach Zsolt Petry over comments made in an interview. Hertha said the sentiments expressed in the interview were not compatible with the club's values. 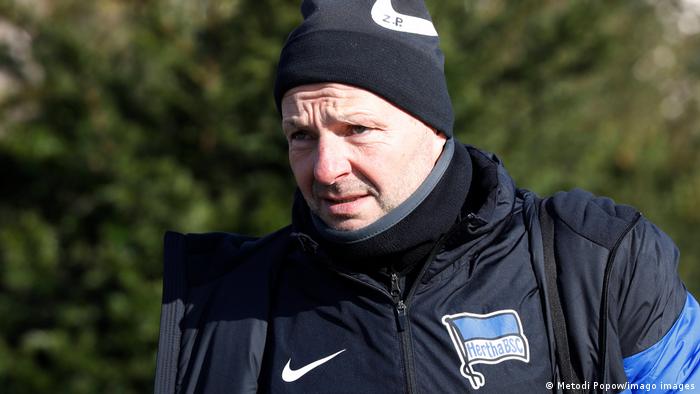 Hertha Berlin have sacked goalkeeping coach Zsolt Petry with immediate effect after the Hungarian made controversial comments regarding immigration and homosexuality in a newspaper interview.

Speaking to the Magyar Nemzet daily on Easter Monday, Petry, who made 38 appearances for Hungary as a goalkeeper and was voted Hungarian player of the year in 1990, called the EU's immigration policy the "moral downfall" of Europe. The 54-year-old also criticized RB Leipzig goalkeeper Peter Gulacsi for his public support of same-sex marriage.

"If I were him, as an athlete, I would concentrate on football and not comment publicly on sociopolitical issues," said Petry of his compatriot Gulacsi, who took to Facebook in December to denounce a constitutional change that effectively banned adoption for LGBTQ couples in Hungary.

Asked by the Magyar Nemzet if he sympathizes with conservative politics, Petry responded: "Absolutely. I don't understand how Europe could sink so morally low; the immigration policy is an expression of moral downfall. Europe is a Christian continent. Let us continue to live by the national values we have learned over the years."

"The liberals inflate any contrary opinions," he continued. "When you don't think migration is good, because criminals have overrun the continent, then they accuse you of being a racist."

Comments 'incompatible with the values of Hertha BSC'

On Tuesday, Hertha announced that, after intense investigation, they would be parting company with Petry, who has been at the club since 2015.

"We have always greatly appreciated Zsolt Petry's work at Hertha BSC, and we have always found him to be open, tolerant and helpful. At no point has he ever acted in a homophobic or xenophobic manner," Hertha CEO Carsten Schmidt said in a statement.

"But we have determined that the comments made are not compatible with the values of Hertha BSC."

In the same statement, Petry insisted that he is "neither homophobic nor xenophobic" but accepted the decision.

"I regret my comments on immigration policy and would like to apologize to all those who seek refuge here and who I have offended," Petry said.

Marc Schwitzky, the founder of the popular Hertha supporter website Hertha Base, opined on Twitter that Petry's comments were "incompatible with the values of Hertha BSC."

Disclaimer: An earlier version of this story had the headline 'Hertha sack goalkeeping coach over migration and homosexuality comments'