Amongst the thousands of tourists, the Hofbräuhaus in Munich hosts more than 120 regulars' gatherings — and the number is rising. DW asked what "heimat," or "home," means for them. 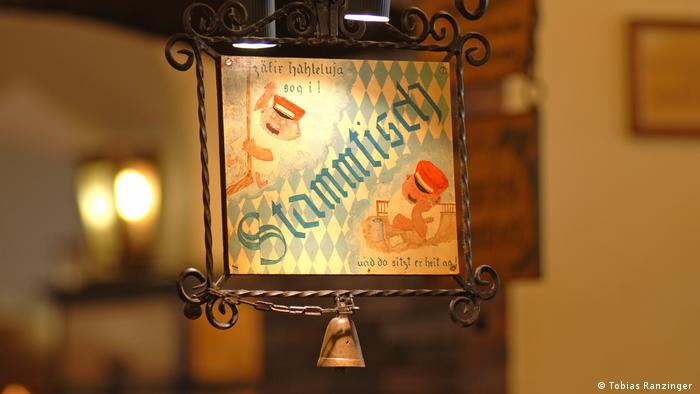 In our mini-series "Heimat 2018" DW reporter Maria-Therese Eiblmeier went to Munich to look for the keepers of Bavaria's traditions. And she managed to find them — between the selfiesticks and tourists.

The angel Aloisius, from Ludwig Thomas' satirical story "Ein Münchner im Himmel" (A Munich resident in heaven) from 1911 is omnipresent in the Hofbräuhaus. In the play, a Munich civil servant is suddenly killed and goes to heaven as an angel. There, however, he misses his Bavarian heimat, or homeland, and the beer so much that God shows mercy and commissions the poor man to at least give the Bavarian government divine instructions from time to time.

On his first assignment, however, Aloisius flies straight to his beloved Hofbräuhaus, where he still sits to this day. Since then, the Bavarian government has had to do without divine inspiration; it is also very unlikely that the idea of adding the "heimat" portfolio to the German federal government's Interior Ministry comes from "above."

In any case, Aloisius found his new and eternal heimat in Munich's Hofbräuhaus, perhaps the most famous pub on the planet — the epicenter of Bavarian conviviality. Two worlds collide there on a daily basis: tourists from all over the world, for whom the visit is a short side trip recommended in guidebooks, and regulars, for whom the Hofbräuhaus embodies true heimat. 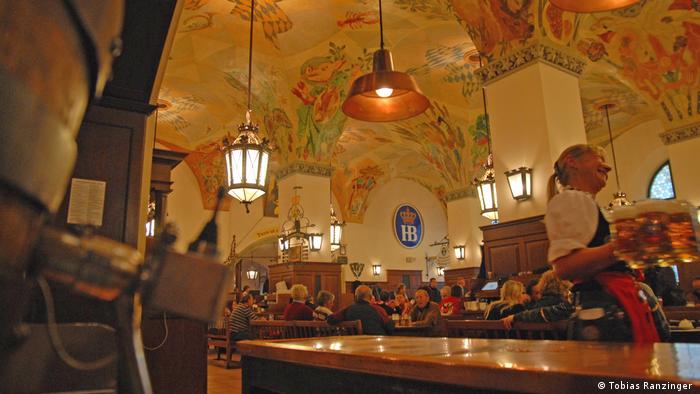 "Thirst is worse than homesickness" is written in big letters on the archway above the bar. Here, in the heart of the Hofbräuhaus, up to a thousand guests can be served. Where beer was once brewed, people from all over the world now sit under the artistically painted ceiling at long wooden tables. It's loud and busy, the brass band plays Bavarian folk music, waiters with trays full of roast pork and weisswurst, a famous Bavarian veal sausage, bustle about between the rows, and young girls in traditional dresses, called dirndls, sell pretzels. The obligatory mugs containing a liter of beer are everywhere and every time the "Prosit der Gemütlichkeit" ("Cheers to coziness") sounds, the mugs clink.

Read more: City of Munich: Economic power in the South

So far it all sounds like a cliche. It goes without saying that this picture-book scenery magically attracts tourists. But the fact that people actually feel at home in this environment and consciously live out the Bavarian tradition can be seen at the many regulars' tables. These regulars speak a Bavarian dialect of German and wear traditional dress. They have the privilege of using their own beer mugs and pay with special coins, or  "beer tokens." A token is worth one measure of beer (one liter) — possible price fluctuations excluded. The coins, which have various motifs, are therefore a safe investment option, so to speak. 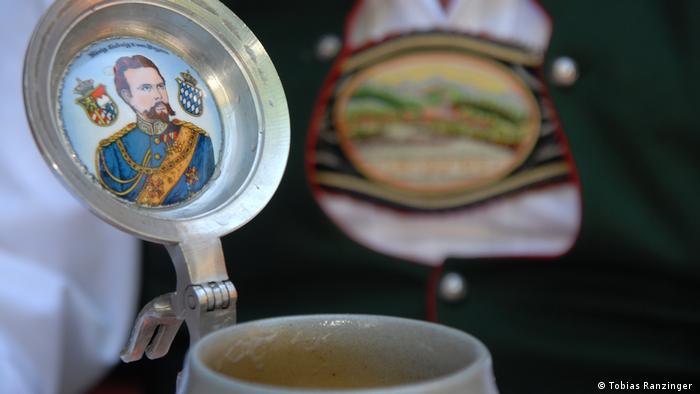 A 'stammtisch' at the Hofbräuhaus means your own personal beer mug

The regulars' table "Prinzregent" (Prince Regent) has been meeting every Friday since 1998. For 20 years the eight men have been admired as living examples of Bavarian culture and enthusiastically photographed by tourists from around the world.

But do they still feel at home there? "Absolutely," confirms Wolfgang Piecha, and the whole group nods, because their regulars' table is a piece of home for them in the middle of the busy pub. It is a place that is familiar, where they always meet the same people, where they are expected and where they are missed if they do not turn up as usual.

Read more: Beer culture - this is how Germany drinks

In her essay "At home in Germany, at home in the world?" sociologist Dr. Cornelia Koppetsch from Darmstadt engaged with the topic of home and homeland. She explains that "feeling at home is also always a question of adapting one's personality to the environment."

"The culture of having a regulars' table must be preserved, because it gives people the opportunity to get into conversation with each other," say the members of the regulars' table. Despite global networking and constant communication via social media, they often have the feeling that this kind of social contact is becoming increasingly rare today. For them, heimat means, above all, community and good conversation. 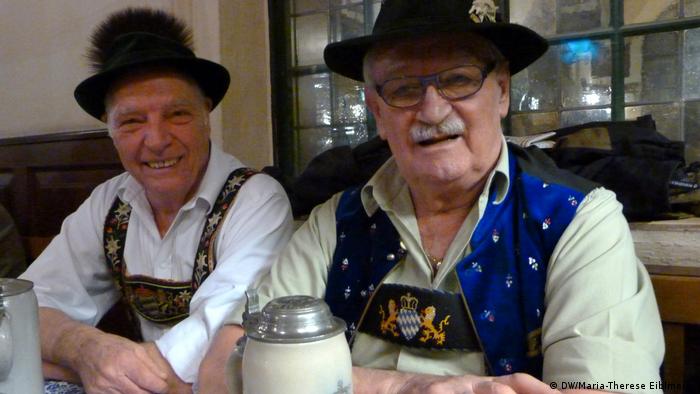 But there need not be any fear that the regulars' table culture will die out — on the contrary. In the Hofbräuhaus there is even a regulars' custodian, who receives constant enquiries about new groups. This is an indication that more and more people are longing for a return to tradition. Cornelia Koppetsch belives the reason for this is "the erosion of social values such as solidarity, or the readiness to help."

With many citizens feeling that the world is becoming increasingly about financial interests and less about community, people are withdrawing into their private sphere of stability and security. Places like the "Stammtisch" ("a regulars' table) promise bonding, identity and meaningfulness in complicated times.

At present, migration and rootlessness are once again playing a major role in social debate. Anyone who expects the "Prinzregenten" to make crude comments on this subject will be taught a lesson: "A Muslim does not have to drink beer in the Hofbräuhaus in order to belong. Those who even halfway identify with Bavarian culture can find a new heimat here," says regulars' table member, Alfons Zeitlhuber.

Beyond political debates about Leitkultur, or defining culture, life is about feeling at ease, according to the unanimous opinion at the regulars' table. That is why guests from near and far are also welcome at the "Prinzregenten" — so many that the group now occupies the next table as well. "It doesn't matter if a person is old or young, what religion or skin color, we don't care," the group says.

The Bavarians only intervene when a Japanese man at the next table wants to eat his weisswurst with the skin on. After all, this is about cultural heritage: weisswurst MUST be peeled. 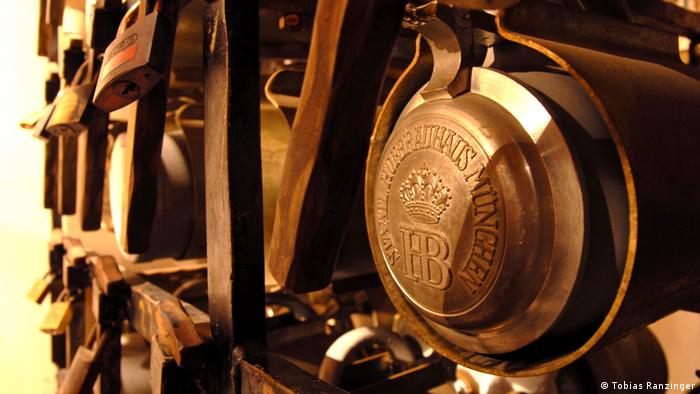 Anyone with their own personal Masskrugtresor, or beer mug compartment, has certainly found their heimat

At the end of the regulars' meeting, the group's members wash out their mugs and store them in one of the 616 "Masskrugtresore" (beer mug compartment) until their next visit. Being allowed to store your mug in one of these compartments is a much sought-after status symbol.

Those lucky enough must pay €4 ($5) a year in rent to the Hofbräuhaus' landlords. However, there will be no lockers available in the foreseeable future. Ludwig Aidelsburger, who came to the Hofbräuhaus almost every Friday for 60  years, died in 2012 at the age of 92. As a sign of loyalty to the former regular, his locker has not been reoccupied since then. Old Ludwig found his eternal heimat next to the angel Aloisius — in Munich's Hofbräuhaus.

A trip around all 16 federal states

Bavaria, Berlin, Baden-Württemberg: all these federal states are Germany, but they are all very different and have their own specialties. Here are the highlights of each of Germany's states. (25.09.2015)