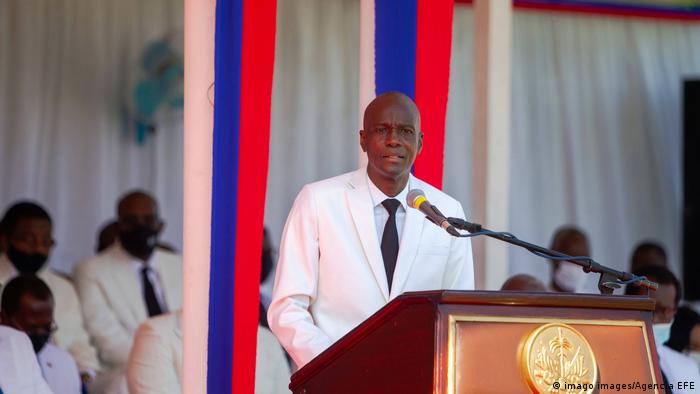 Moise was reportedly killed by an attack in his home

The president of Haiti, Jovenel Moise, 53, was shot and killed in his private residence, the interim Prime Minister Claude Joseph announced Wednesday.

The president's residence said in a statement that the attack occurred around 1 a.m. and that his wife Martine Moise was also wounded and taken to hospital.

Acting Prime Minister Claude Joseph, who is now leading the country, declared a state of siege in Haiti and closed the Port au Prince international airport.

What do we know about the assassination?

The assassination was carried out by a "well-coordinated" commando group with "foreign elements," AFP news agency reported, citing interim Prime Minister Joseph. The politician seemed to have stepped in to fill the power vacuum, although he was due to be replaced this week by Ariel Henry, a neurosurgeon. 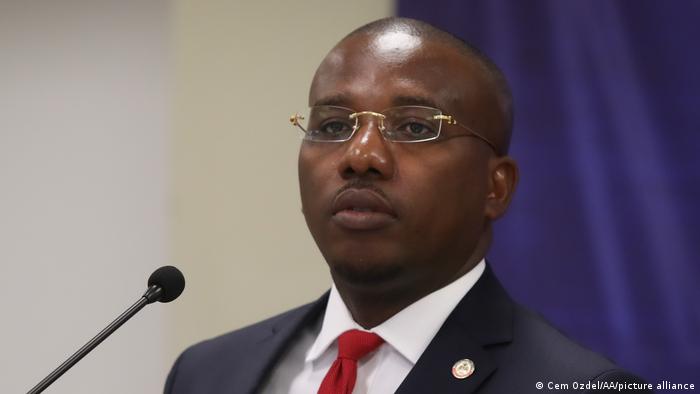 "The president was assassinated at his home by foreigners who spoke English and Spanish," Joseph told the AFP news agency.

He labelled the assassination a "hateful, inhumane and barbaric act," saying the killers had used "high-caliber weapons."

In an appearance late Wednesday with Joseph, police chief Leon Charles said that four of the presumed attackers had been killed and two arrested.

"Four mercenaries were killed, two were intercepted under our control. Three policemen who had been taken hostage have been recovered," Charles said.

A government video suggested that the gunmen got into Moise's home by claiming to be US Drug Enforcement Administration (DEA) agents.

However, Haitian Ambassador to the US Bochhit Edmond, said, "no way they were DEA agents," in an interview with the Reuters news agency.

He added that the wounded wife of the late president was in a "stable but in critical condition," and efforts were being made to fly her to Miami in Florida for treatment.

Acting PM Joseph later also said that Martine Moise had been transferred to Miami and that her condition was no longer critical. 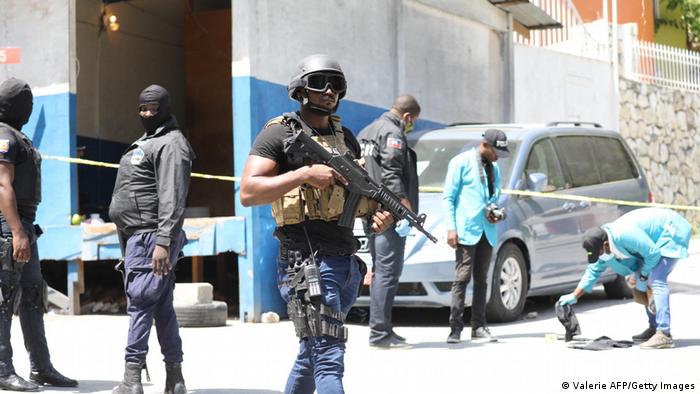 President Jovenel Moise's home is under armed guard after the assassination

How have other countries reacted?

The UN Security Council issued a statement condemning Moise's killing and calling on "all political stakeholders in Haiti" to "remain calm, exercise restraint and to avoid any act that could contribute to further instability." The Council was set to be briefed in more detail on the situation on Thursday.

"We stand ready to assist as we continue to work for a safe and secure Haiti," said US President Joe Biden, branding the killing "heinous" and calling the resulting situation "worrisome."

Neighboring Dominican Republic President Luis Abinader slammed the killing as "an attack against the democratic order of Haiti and the region." His government announced it was closing the border that it shares with Haiti on the island Hispaniola.

Colombia's Ivan Duque Marquez called the murder a "cowardly act" and proposed that the Organization of American States send a mission to Haiti to "guarantee democratic order." 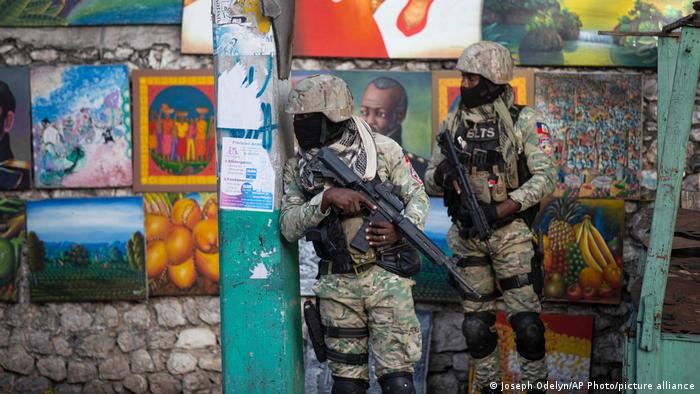 British Prime Minister Boris Johnson tweeted that he was "shocked and saddened by the death of President Moise. He called the murder "abhorrent" and called for calm as looting was reported in Haiti.

Spanish Prime Minister Pedro Sanchez appealed for "political unity" in Haiti to get through "this terrible trauma."

Finally, Taiwanese President Tsai Ing-wen wished Haiti's Martine Moise "a prompt recovery." As Haiti is one of the few countries that recognizes Taiwan separate from China, she added that his island nation stood "together with our ally Haiti in this difficult time."

Why was Haiti in crisis?

Jovenel Moise had been ruling Haiti's population of over 11 million by decree since the 2018 elections were delayed over a series of political disputes. One of those disputes was when Moise's term was set to expire. Parliament was dissolved as a result.

In Haiti, some 60% of the population makes less than $2 (€1.70) a day and food and fuel shortages have led to spiraling inflation.

Many in the impoverished nation viewed Moise's rule as illegitimate as his term legally expired in February 2021. He cycled through seven prime ministers in four years and faced a strong protest movement.

Opposition leaders had accused him of being power-hungry. With two controversial decrees, Moise has limited the power of courts to perform audits on public procurement contracts and created an intelligence service that only answers to the president.

His supporters argue his term did not legally begin until 2017 following a chaotic election and a year-long hiatus that forced the appointment of a provisional president. 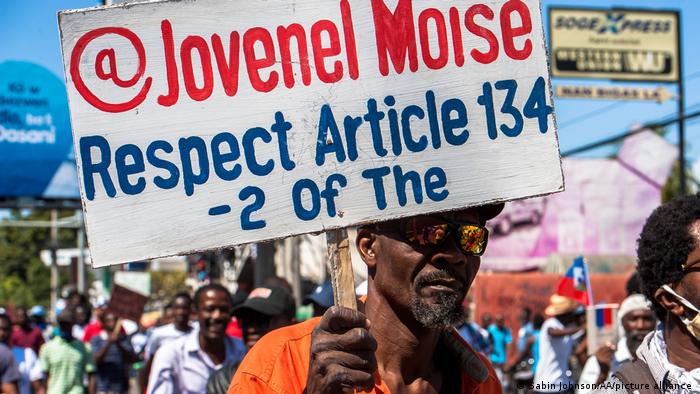 Haiti is scheduled to have a constitutional referendum in September over a much-criticized effort of Moise to strengthen the executive branch. Presidential, legislative and local elections are also to be held in September.

The current constitution declares "any popular consultation aimed at modifying the Constitution by referendum is formally prohibited." It was written in 1987 after the fall of the Duvalier dictatorship.

What is the situation like on the ground right now?

In Port-au-Prince on Wednesday, the streets were quiet despite some reports of gunfire and looting said to have taken place in one area. The assassination follows a general uptick in violence and kidnappings for ransom as gangs and police vie for control of the streets.

The "state of siege" in Haiti was different than a state of emergency, Haitian journalist Widlore Merancourt told DW.

"The police officials have large powers to put things into order but we are still trying to determine what is the reach of this decision," he said. 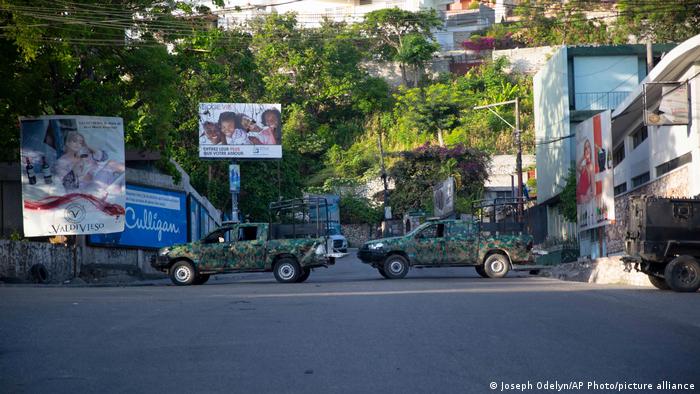 Military vehicles block the entrance to the neighborhood where Moise lived

The journalist added that because Prime Minister Joseph was set to be replaced in a few days, "a lot of politicians and stakeholders are saying that he didn't have any authority to declare what he has declared."

"Large parts of the country are controlled by gangs, thousands of people are seeking shelter fleeing gang violence," said the journalist. "These men can parade in several main roads while the police cannot do anything because they have more arms than the police." 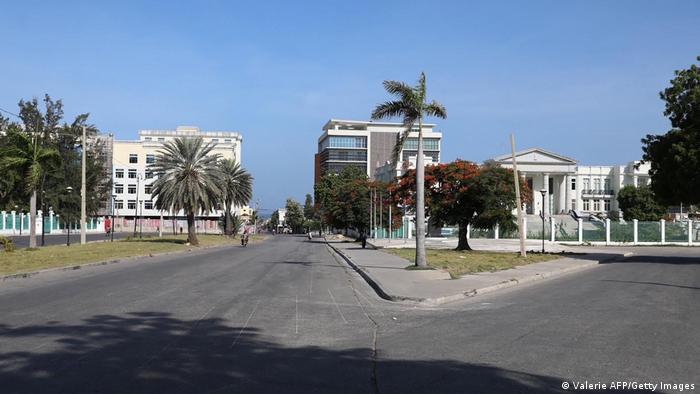 Empty streets near the Presidential Palace on July 7 in Port-au-Prince, Haiti

Meanwhile, acting Prime Minister Joseph said police had been deployed to the National Palace as well as to the upscale neighborhood of Petionville and other areas.

"All measures are being taken to guarantee the continuity of the state and to protect the nation," Joseph said.

The US Embassy in Haiti announced it would be closed on Wednesday because of the  security situation. On June 30, the embassy had condemned human rights violations and attacks on press freedom in the country and called on the government to act against armed gangs. 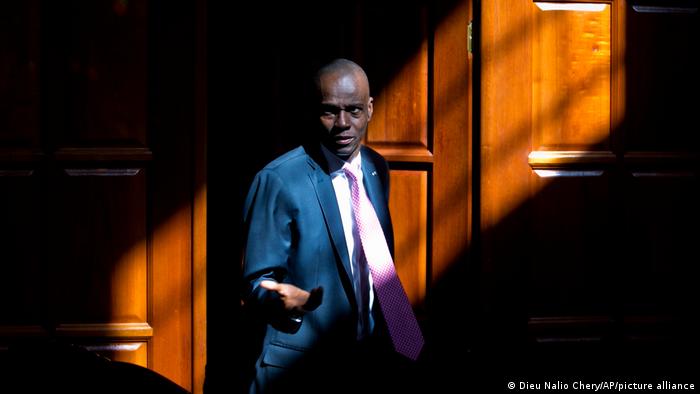