Police say they seized weapons and cash after an alleged attempt on the president's life. More than 20 people, including a top judge and police official, have been arrested. 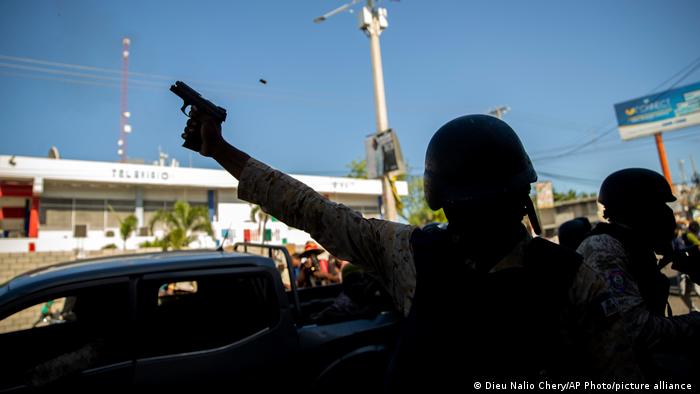 Haiti's president, Jovenel Moise, announced on Sunday that security officers had thwarted an attempt on his life. About 23 people, including a Supreme Court judge and a top police official, were arrested for what he described as an attempted coup.

"These people had contacted national palace security officials, high-ranking officers at the national palace whose mission was to arrest the president… and also to facilitate the installation of a new president," said prime minister Joseph Jouthe.

The alleged coup attempt followed a call by Haiti's opposition leaders to replace Moise with one of the sitting Supreme Court judges. The opposition accused Moise of being authoritarian and pushing Haiti towards economic chaos.

Earlier in the day, anti-government protesters clashed with the police in Port-Au-Prince.

According to Haiti's constitution, presidential terms last for five years. In the presidential election of October 2015, Moise was elected, but the election was annulled because of fraud. In 2016, another round of elections were held, which was again won by Moise and he was sworn in on February 7, 2017.

Opposition leaders claim that Moise's term began in February 2016 and ended this Sunday. Meanwhile, Moise and his supporters claim 2017 as the year of his ascent. The president has said that he will hand over power to the winner of the elections in October 2021 and will not step down till his term expires in February 2022.

On Friday, the US government urged Haitians to resolve the crisis. Washington said that a new elected president should succeed Moise "when his term ends on February 2, 2022."

Banana exporter Jovenel Moise has claimed over half of the popular vote in Haiti, early results show. If the reports are confirmed, the businessman would become president without a run-off vote.

More than 300,000 people were killed when a 7.0 magnitude earthquake struck near the capital, Port-au-Prince. Survivors received little of the more than $10 billion in aid that Haiti supposedly received in the aftermath.