Haiti: How criminal gangs have taken control | World | Breaking news and perspectives from around the globe | DW | 10.08.2022 Haiti's gangs have thrived on the economic and political corruption, and have been empowered by the elites.

A recent upsurge in gang warfare has claimed hundreds of Haitian lives and displaced thousands in the capital Port-au-Prince and the surrounding area, as the country plunges into lawlessness.

The heavy turf war has been raging for months now, but it has become more intense and widespread in the past few weeks, paralyzing most of the country. 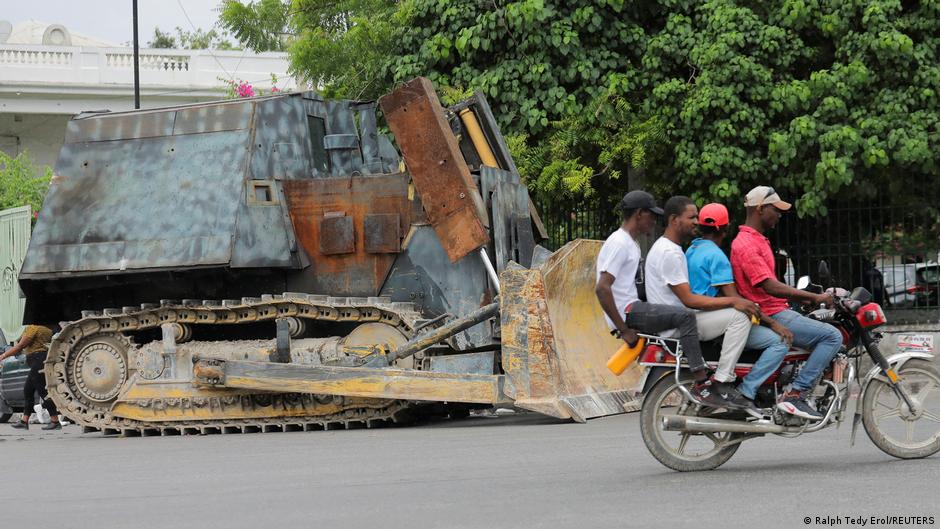 In the past weeks, clashes between the gangs spread into the main avenues of the capital, near the presidential palace.

The clashes have occurred more prominently in the Cite Soleil neighborhood in the capital, home to about 300,000 people and one of the country's biggest slums, where gangs have gained more influence over the past several years. There, the gang members have been destroying slum homes with bulldozers to expand their territory, as well as raping women and girls, and killing ordinary citizens at random. Outgunned by the gangs, the army seems unable to exert control and contain the violence.

How gangs undermine the government's control

For years, Haiti's political elites used gangs to achieve their own objectives, silence dissent, and confront their rivals.

Although criminal organizations' intervention in politics is not unique to Haiti, it has reached unprecedented levels in the poor Caribbean nation, especially so following the assassination of President Jovenel Moise in July 2021. 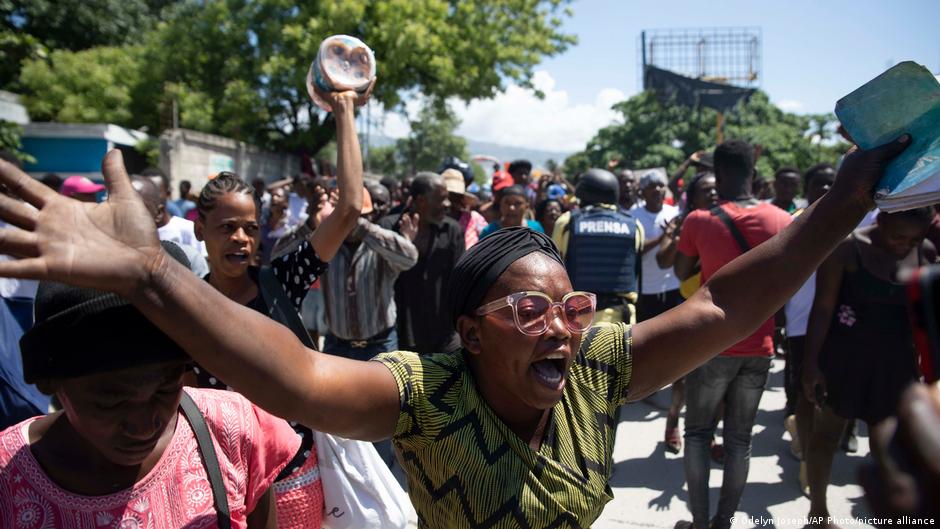 Devastated by violence, lack of food, and fuel, Haitians have marched the streets several times in the past months.

Powerful business families in Haiti have been paying gangs to sustain the security of their trade for them. This is how some of the bigger groups like G9 have gained control over the capital's port and managed to smuggle weapons of war for themselves, some of which are more advanced than the guns that the Haitian armed forces use.

In July, a string of arms-trafficking scandals in Haiti, including the discovery of weapons in a shipping container labeled as church donations, prompted the UN Security Council to push for international cooperation to stop the flow guns from the United States into Haiti.

In the past few weeks, the G9 have blocked the port, where most of the imported goods enter the country, exacerbating the food and fuel crisis.

Gangs instead of an army

A lack of a well-funded army has created a power void that Haiti's major gangs are competing to fill in. Haiti dismantled its army in 1995 following a coup in 1991, after decades of military interference in politics and mutiny.

Since then, Haitian politicians, most notably former President Jean-Bertrand Aristide who came to power in 2001, have increasingly resorted to gangs as a more reliable and obedient source of power to suppress rebellions. Haiti's armed forces are outgunned and outnumbered by criminal gangs.

The slain president, Jovenel Moise, tried to remobilize the army in 2017, but he never managed to round up enough soldiers and resources to match the gangs' growing gun and manpower.

The exact number of gang members is hard to come by, but according to the National Human Rights Defense Network, there are more than 90 gangs in the country.

The country is plummeting into disaster

Once one of the wealthiest French colonies, the nation of 11 million people suffers from an unproductive economy, with about two-thirds of its GDP coming from the money those Haitian migrants send home and international aid, according to World Bank data. The government tax revenue, the primary source of funding for a national army stands as low as 5.6% of its relatively small GDP. 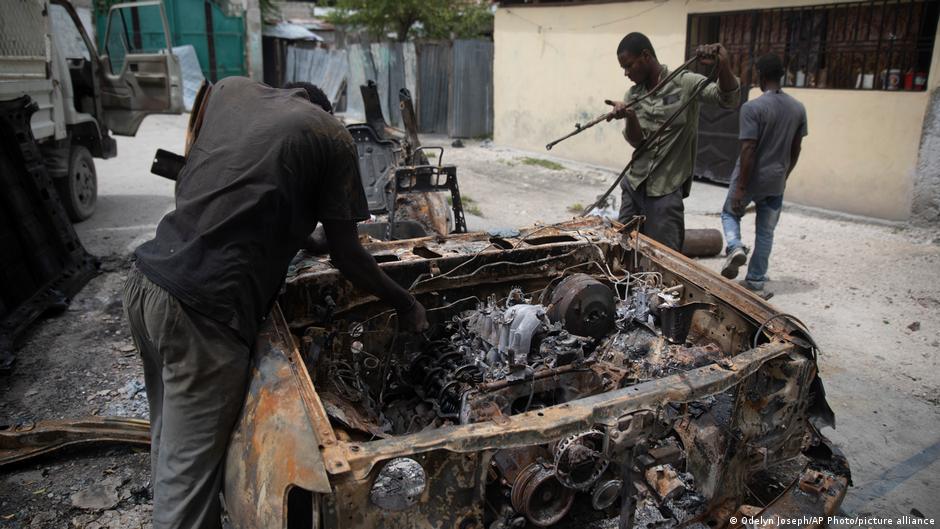 Haiti's local production has almost stopped for a few years now, with the country importing most of its needs from outside.

About 60% of the population lives in poverty, with nearly half the population in immediate need of food assistance and 1.2 million suffering from extreme hunger, according to the UN World Food Program.

The spread of gang violence has made things worse.

Between 2016 and 2020 gang violence cost the country $4.2 billion (€4.1 billion) per year, or 30% of its GDP, Bloomberg reported in September 2021. The resulting chaos has also discouraged foreign investment, blocked trade routes, and disrupted the remains of the local economy, driving up inflation rates and food and fuel prices. 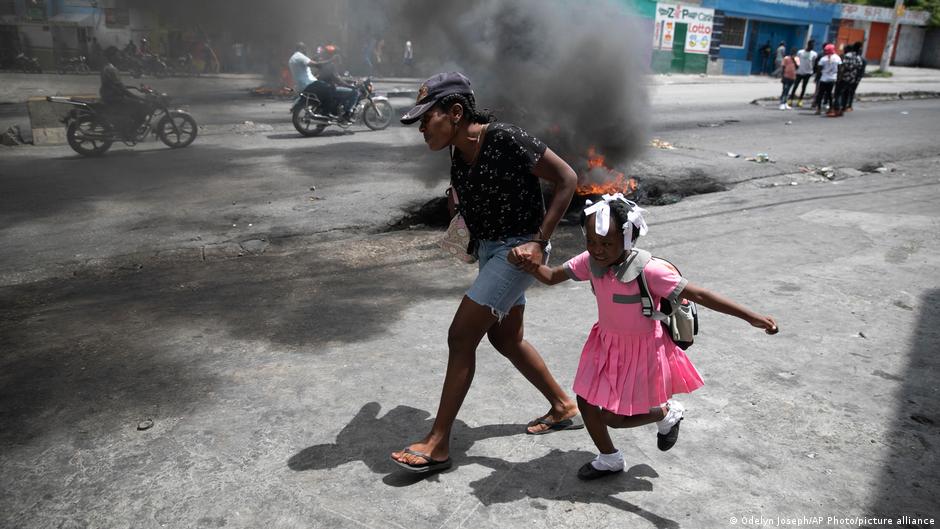 The turf war has seen schools and universities closed and the grim economic prospect boosts the gangs' influence.

A UN report quoted a survey by two local youth-focused organizations which found that 13% of the children in one troubled neighborhood in Port-au-Prince had been in contact with members of armed gangs who tried to recruit them.

Without immediate, sizable intervention that can stop the vicious cycle of violence, chaos and poverty, Haitian youth would have few options rather than joining the gangs to survive.

Restoring democracy in Haiti: 'We need to build up the conditions first'