Green gold: Avocado farming on the rise in Africa

In East Africa and Nigeria, avocado farmers want to enter the insatiable export market. Environmental concerns cast a shadow over the crop in other parts of the world. What will African farmers do differently? 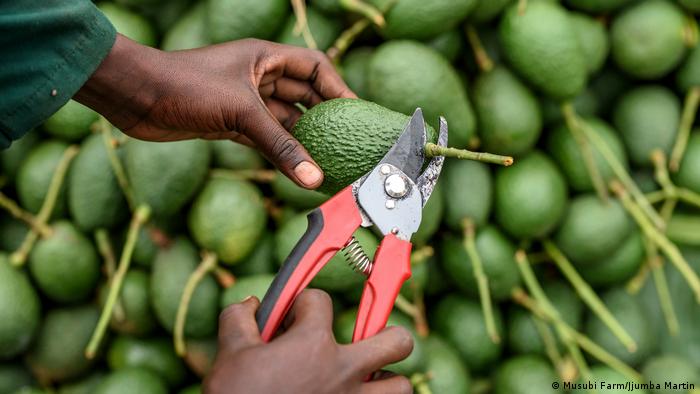 Baker Ssengendo's vision for the future of Uganda starts with an avocado seedling. "The avocado tree has a lifespan of about 50 years. The life expectancy of an average Ugandan is about 60 years. A tree can benefit them their entire life," he told DW.

Ssengendo works on the 1,000 hectares (2,470 acres) of Musubi Farm in Mayuge district, eastern Uganda ­— the largest Hass avocado farm in the country. "By working in avocado farming, I am fulfilling my life dream. We want to lift our communities out of poverty."

Due to high global demand, the avocado has become a lucrative export product. Its consumption per capita increased by 406% between 1990 and 2017 in the US alone.

The so-called green gold is rapidly gaining popularity on the African continent. Both Nigeria and Uganda aim to drastically increase their avocado production and become top exporters in the next decade. Kenya is already among the global top 10. Export revenues in the East African country surged by a third between 2019 and 2020. Farmers are hailing the crop as an antidote to poverty in rural areas. 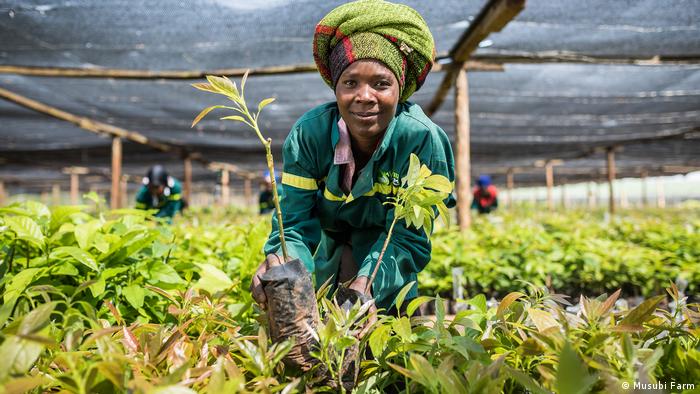 Uganda is aiming to become a top global avocado exporter

But the sought-after fruit has been making negative headlines around the world. Water shortages and the destruction of biodiversity have been linked to its production. The environmental issues have cast a dark shadow over the commercial farming of avocados in Latin America's top exporting countries, such as Mexico and Chile.

But African avocado farming is promising a brighter future, according to both farmers and scientists. Due to an emphasis on smallholders and beneficial rain patterns, the crop's production is expected to be less environmentally harmful than on the American continent.

"Avocado is actually a godsend because farmers can use it as an alternative to coffee farming," Sammy Carsan, agroforestry scientist at the World Agroforestry Center in Nairobi, told DW.

In recent years, fierce competition between large retailers has driven down coffee prices. In 2019, coffee farmers' earnings dropped to their lowest in 13 years. Now, hopes are high for avocado to fill the income gap.

According to The Guardian newspaper in Nigeria, former Nigerian President Olusegun Obasanjo called the fruit "the new oil of Nigeria" during a meeting with members of the Avocado Society of Nigeria (ASN) late last year. The politician-turned-avocado-enthusiast is the largest stakeholder in the society and owns 20 hectares of Hass avocado farming land himself — the avocado variety most commonly used for exports.

Avocados — a not-so-super food after all?

Living Planet: Avocados — a not-so-super food after all?

"He gave us the mandate of making the country Africa's largest avocado exporter by 2030," Adeniyi Sola Bunmi, executive director of ASN, told DW. Currently, there are only 120 Hass avocado farmers in Nigeria. ASN is training smallholders wishing to switch to the crop and provides them with Hass seedlings.

In Uganda, the Agriculture Ministry recently partnered with Musubi Farm, hoping to start commercial export next year. Musubi is already employing 1,000 people from the local community. "We are also financially supporting a local school and are providing land for a local police force in order to deal with crime in the community. Avocados can transform our community," said Ssengendo, the director of communications.

Large-scale commercial avocado farming is at the core of environmental issues, such as soil degradation, in Latin America. However, in East Africa and Nigeria, smallholders are at the center of a more sustainable avocado farming approach.

"Our plan is to have 75% of avocados produced by smallholder farmers and 25% by our farm," Ssengendo said of his vision for Uganda. In neighboring Kenya, smallholders are already spearheading avocado production, with most avocado farmers only owning about 2 hectares of land, according to Carsan.

Small farms mean less strain on the environment, Ruben Sommaruga, professor of limnology, or inland aquatic ecosystems, at the University of Innsbruck, told DW. "Large industrial production always implies a large use of pesticides. That is usually not the case with smallholder farmers, who can control their small number of trees more easily."

In smallholder settings, the crop is often complemented with other farming enterprises, such as maize and bean crops, planted for subsistence. According to Samson Ogbole, a sustainable farmer in Nigeria, mixing avocado trees with agroforestry systems can curtail negative environmental effects. "Planting crops like legumes around the tree crops helps replenish the soil."

According to the Water Footprint Network, it takes 2,000 liters of water (528 gallons), or 10 full bathtubs, to grow just one kilo of avocados. Planting the fruit has been linked to water shortages in Chile, for example, where farming has affected water availability for human consumption.

But the water consumption of the crop shouldn't be removed from its local context, according to Sommaruga. "It's always a matter of how much and what kind of water you have in the countries where you grow the trees."

In Uganda and Nigeria, avocado farms are mainly located in areas with beneficial rain patterns, according to Sommaruga.

"The central and southern part of Nigeria receives relatively high precipitation. The south of Uganda does as well. In Kenya, much of the avocado farming is done north of Nairobi, where mountains retain most of the rain," said Sommaruga.

Frequent rainfall means farmers do not have to rely on irrigation systems, which artificially apply water to the soil. "In smallholder settings, avocado is produced on a rain-fed basis with few irrigation systems," Carsan said about avocado farmers in Kenya.

For now, avocado production has not been linked to water shortages across African farmlands. But, as Sommaruga points out, the rain patterns that avocado farmers in sub-Saharan Africa are benefitting from today are expected to decrease in the future due to climate change.

Bunmi from the Avocado Society of Nigeria has also been farming avocados on his land, hoping to export to Ukraine and the United Kingdom in five years. "Regarding water, I don't see any problem in the next 20 years. But maybe as time goes on," Bunmi said.