Green gadgets are devices we use on a daily basis that are both practical and sustainable. With their smart, innovative features, they also help raise new awareness about renewable energy. 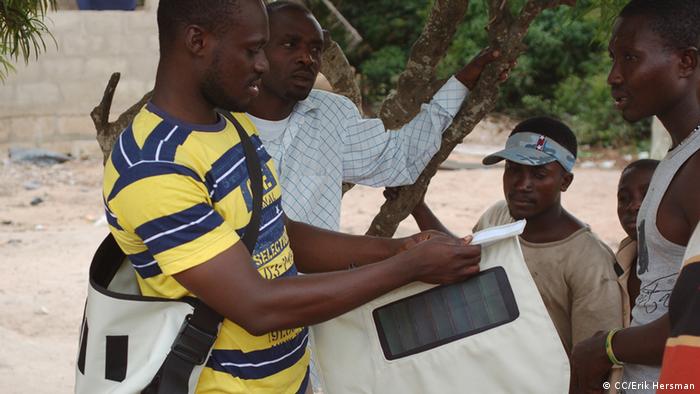 Green gadgets are useful, often solar-powered innovations such as this flap bag

If you think a football is only good for scoring goals, you’re mistaken. The round piece of leather can also supply electricity as two Harvard graduates discovered in 2008. The two invented the “sOccket,” a portable source of energy in the form of a soccer ball.

It captures and stores energy during normal play to be used later to provide clean energy to power electrical appliances such as LED lamps and mini refrigerators. It holds huge potential for an estimated 25 percent of the world's population living without electricity. Just 30 minutes of sOccket play can provide electricity for three hours. 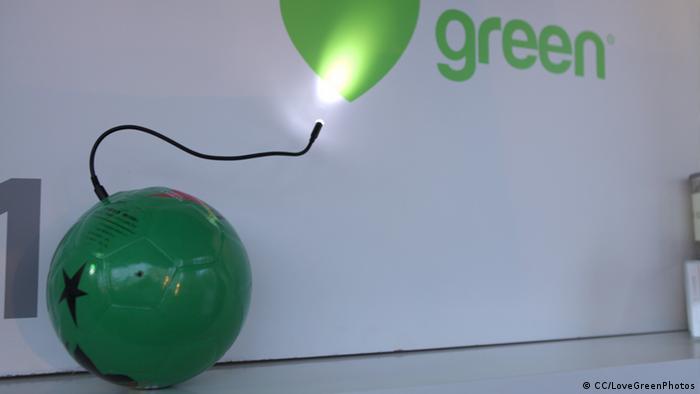 The sOccket has proven especially popular with children in poor and developing countries. The ball’s generator produces 6 watts of electricity. That's enough not just to power lamps but also loudspeakers, cell phones, water treatment plants and hot plates for cooking. The initial prototype developed by Jessica Matthews and Julia Silverman used an inductive coil mechanism to capture kinetic energy from the ball’s movement and convert it into power.

The redesigned sOccket uses a permanent magnet DC generator. The inventors are planning to take the sOccket into mass production and around the world via ‘Uncharted Play,’ their non-profit organization based in New York. A donation of 60 euros sends one sOccket to a developing country.

Inventing „green gadgets“ that are practical, fun and usually powered by renewable energy has become a hot trend. Although many of the green gizmo models are still in the testing phase, there are a variety of products already out on the market, from toys to electronics to office items and even furniture.

The green toy industry is especially strong, boasting a vast range of gadgets and games. And budding inventors and engineers have plenty to choose from. Several toy manufacturers sell experiment and science boxes with which you can craft your own model solar-powered cars or airplanes, complete with fuel cells.

In Germany, mid-sized toy producers have made a splash on the market with green-inspired themes. HCM Kinzel, for example, offers a “Green Sciences” series that includes a solar egg cooker and a wind turbine construction kit. “The sector is growing fast, and we see a lot of potential,” said Sascha Mehl, assistant to the CEO at HCM Kinzel.

Mehl’s favorite product is the potato clock. Zinc and copper rods, serving as electrodes, are inserted into the potato and connected to cables. The spud’s juices are naturally acidic, starting an electrolysis process that generates enough energy to power a small digital clock.

“These kinds of products raise awareness about the ways we can use everyday items to generate energy,” Mehl said.

Even our own muscles are a source of energy. For instance, there are flashlights that require a good shake instead of a set of batteries, or wind-up radios that rely on strong biceps to be charged.

When it comes to green gadget ideas and concepts, the sky is the limit. There are playing cards featuring electric autos, miniature hydropower cars, games that test your level of energy awareness and even model windpower facilities.

“Green gadgets help to convince children at an early age that clean energy works and has a huge potential in the long-term,“ Sascha Mehl said.

Solar panels instead of leaves

Another spectacular green gadget is the “Electree,” a solar bonsai tree created by French designer Vivien Muller. Instead of leaves, small solar photovoltaic panels hang from the bonsai’s branches. 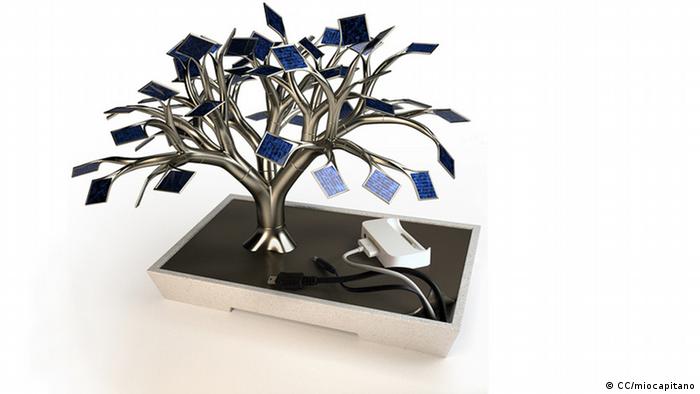 The Electree solar bonsai, with its stylish photovoltaics, can charge your electric devices and needs no watering

Those panels produce energy stored in an integrated battery – and that battery can be connected via concealed USB cable to electronic devices, providing an eco-friendly source of power. The Electree will take about 36 hours of sunshine to fully charge its battery.

Electree owners decide themselves how many panels they want to hang from the branches, designing the aesthetic of their own bonsai. It can hold a maximum of 27 panels, making the bonsai 40 centimeters high. The branches and each module are also rotatable, allowing the owner to create different shapes.

Like any other tree, it should be placed next to a window in order to be exposed to as much sunlight as possible. But there are a few ground rules: no pruning or watering.

Products such as the Electree, with its stylish photovoltaics, are however an expensive lifestyle accessory for many. But innovations like the soccket, robust solar cell phones or energy-generating shoulder bags offer a real, clean alternative and can help improve electricity supply in poor and developing countries.

sOccket inventors Jessica Matthews and Julia Silverman say they hope their football helps lead the way in thinking outside of the box to offer simple, local solutions for global problems and that consumers learn that engaging with environmental issues can be fun. "We hope that we can inspire other people," Matthews said.

Wind power is essential to fighting climate change, yet building the turbines is energy-intensive and the blades are made from plastics. So how eco-friendly is wind power really?

There are clear pathways for world leaders to honor their pledges to stop global heating at the UN climate summit this week.