Greek site of ancient synagogue confronts anti-Semitic past | Europe | News and current affairs from around the continent | DW | 30.04.2019

A town in Greece is grappling with its history. Tourists now flock to sites that the townspeople of Veria often don't even know about. Authorities have little interest in playing up a legacy of anti-Semitism, however. 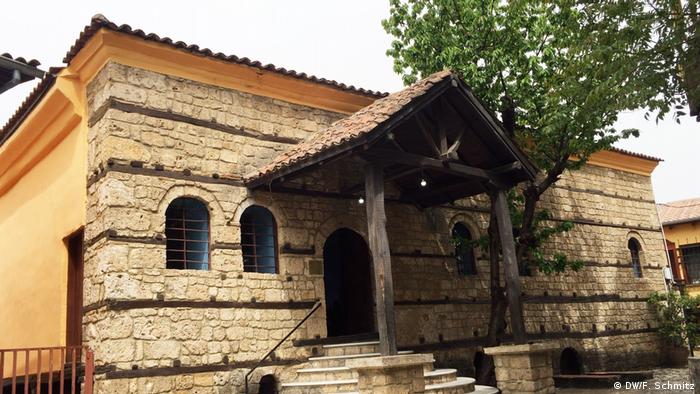 A visitor from Israel once burst into tears when Evi Meska, a tour guide at the site of Veria's first-century synagogue, the oldest in northern Greece, told them how the Jews in the town were imprisoned for days in late April 1943 without water or food and then deported to Thessaloniki on May 1 and onward to Auschwitz, where most were killed by Nazi Germany.

"People, including young children, died a terrible death here, just because they did not fit other people's worldview," Meska told DW, calling the site a place where visitors understand that "humanity must be united."

Many residents of Veria appear much less interested in this past. Some even have no idea that the city has a synagogue at all, Meska said. She added that Christians, Jews and Muslims had lived in the region together for centuries. The apostle Paul even preached by the Tripotamos River. In order to help locals and visitors understand the town's history, she said, she worked to open the historic synagogue to the public, with the help of a city council official who gave her the keys and got permission from the Jewish Community of Thessaloniki.

"At first, I would stand here with my mobile phone in hand, waiting for visitors," Meska said, remembering a time when she worked as a volunteer. "Things are slowly coming along," she said. Slowly: To this day, the city of Veria has not managed to set up a public toilet for visitors. 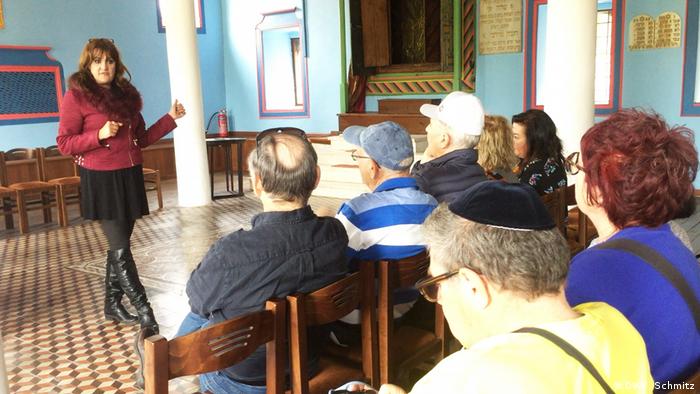 In addition to calling for accountability, Meska is working to educate locals and tourists

Meska said residents seemed not to have noticed that the synagogue had reopened or that the old section of town has become one of its most important tourist attractions. Thousands of visitors of all faiths have toured the area since its reopening, Meska said — history has become an economic opportunity for Veria, which has been slow to recover from Greece's long financial woes.

The rich history comes into seeming conflict with the self-image of present-day Greece, where the narrative is more one of Orthodoxy and antiquity. After the signing of the Prespa Accord to resolve name dispute with the neighboring country now known as North Macedonia, nationalism is taking more aggressive forms.

Meska said anti-Semitism and racism had again become problems in Veria. Once, she said, she wore a gift necklace bearing the Star of David, the symbol of Judaism. "On the 10-minute way home, three people came up to me," she said. "An acquaintance warned me about the fascists who would beat me up, another said Judaism was Voodoo and that I had to wear a cross, and the third, a devout Christian, asked if I was a fool and had become Jewish — in which case he would throw me out of his shop and wish me to hell."

Giorgos Liolios wrote the first book about Veria's Jewish residents and their extermination by the Nazis. Finding information about the Jewish community was not easy, the Veria-born lawyer said: "The people here did not want to talk about it." 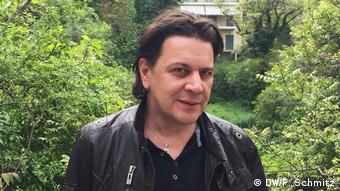 Before Liolios' book in 2009, Veria's Jewish history had gone undocumented for decades

Shadows of the City, the 2009 book by Liolios, was a turning point for Veria. People finally began to take notice of the city's past — even if some residents accused Liolios of being a Mossad agent. "There is a lot of prejudice against Judaism," he said.

Liolios blames the anti-Semitism on a nationalist postwar educational system that has attempted to redefine the identity and self-image of Greece and Greeks. Veria was not anti-Semitic, he said, adding that many non-Jewish residents attempted to help their neighbors survive during the Nazi persecution.

That solidarity is hard to find now. "For centuries, many ethnic groups lived in a large Macedonia that was part of the Ottoman Empire," Liolios says. "Back then, no one cared about other people being different." When the regions of Macedonia and Thrace became part of Greece in 1912, the new aim was to create a culturally homogeneous state, he said. "Suddenly, Muslims and Jews became minorities," he added, "and that caused a feeling of fear."

That includes revising textbooks that teach a nationalist narrative along the lines of "the Greeks were the chosen and the best people and thoroughly heroic," Liolios said. "It is important to recognize that ethnic diversity does not pose a threat."