The Macedonian and Greek leaders posed for selfies during Alex Tsipras' first official visit. It marks a "new chapter" in relations between the neighbors after a decadeslong dispute. 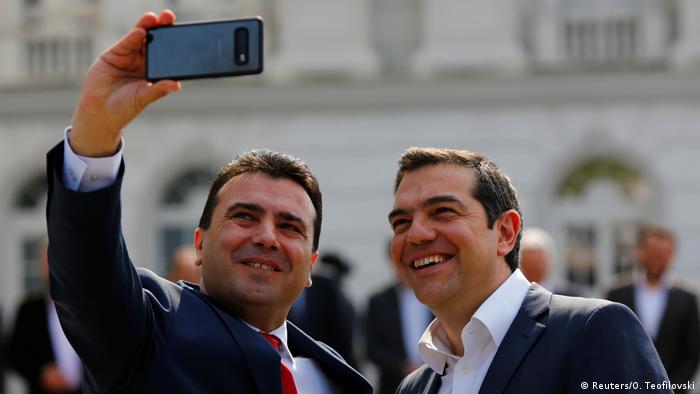 Greek Prime Minister Alex Tsipras was in the capital of North Macedonia, Skopje, on Tuesday for a landmark trip to Greece's northern neighbor.

"Today our republic for the first time in its history is a hosting an official visit of a Greek prime minister," North Macedonian Prime Minister Zoran Zaev noted during a joint press conference.

"We are starting to cover lost ground to build a deep friendship, not only between our governments, but especially between our people," Tsipras said.

Tsipras' visit comes just weeks after the former Yugoslav republic changed its name to North Macedonia, settling a dispute that has been going on for almost 30 years.

Despite fierce opposition from nationalists on both sides of the border, the leaders agreed to the name change in exchange for the Greek government's assurance that it would stop thwarting its neighbor's efforts to join NATO and the European Union.

Tsipras traveled to Skopje with 10 Greek Cabinet ministers and a large business delegation. Greece is expected to sign several cooperation agreements, including for military training, and firm up about €500 million ($559 million) worth of investments with North Macedonia, which is much smaller and poorer than Greece.

"Gradually everyone will start to understand, both the Greek people and the citizens of North Macedonia, the damage that has been done over the past years when we were unable to sit together and try to solve our disputes," Tsipras said.

North Macedonia has been an EU candidate country since 2005, and is due to become the next member of NATO. Its application to both organizations had been held up because of the dispute over the name.

The controversial accord to rename Macedonia has caused a great deal of resentment in Greece. But with the issue now officially settled, life in Greece goes on. Florian Schmitz reports from Thessaloniki. (28.01.2019)

Inside Europe: North Macedonia - what's in a name?