A derby match between Panathinaikos and Olympiacos was called off because of riots in the stadium. Such outbursts of violence plague the Greek Super League. Fans, police and clubs are pushing the blame onto each other. 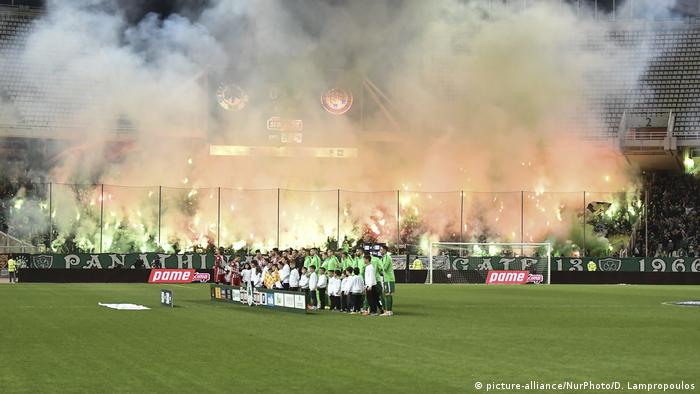 It should have been a celebration of football. In Athens' Olympic Stadium, traditional giants Panathinaikos are up against serial champions Olympiacos. Tens of thousands of fans are cheering their team on.

But suddenly riots begin. Police launch teargas and players and coaching staff are attacked right in front of the cameras. German referee Marco Fritz gives the home side Panathinaikos the requisite hour to get the situation back under control or to clear the stadium. When the hour passes and nothing changes, the game is ended early, with Olympiacos leading 1-0.

That was last Sunday. On Monday, Panathinaikos complained that Fritz had acted too rashly. "The German referee did Olympiacos a favor," ran a comment in the sports paper Prasini, which has close ties to Panathinaikos. On the other hand the newspaper Fos, considered to be something of a voice for Olympiacos, took pity on the foreign official, who "is probably shocked by what he experienced". 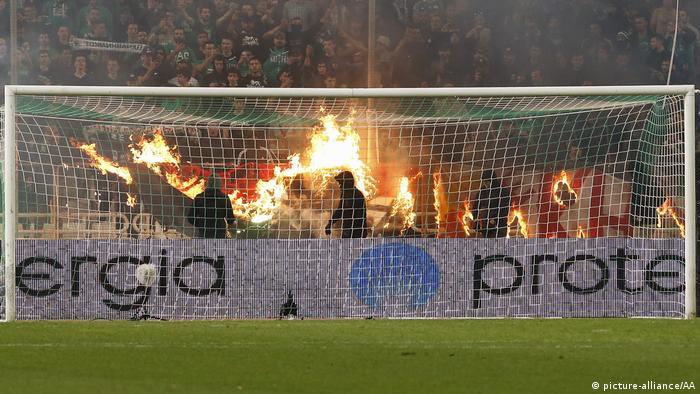 Trouble in streets as well as stadiums

Rival fans in Greece are always having skirmishes in the streets, even over sporting events that have nothing to do with football. The women's volleyball league is occasionally overshadowed by riots. Football hooligans generally go crazy over arch-rivals Panathinaikos and Olympiacos, but even supporters of traditional clubs AEK Athens and PAOK Thessaloniki like to get a bit rough with their opponents. Why is that?

Manos Staramopoulos, a football expert for Italian and Spanish sports media, sees many reasons for violence in football stadiums: "Failure of politics, a lack of fair play among the fans and not least the sensationalism of much of the media have contributed to the current problems."

No consistent punishment of offenders

The main issue, however, is that punishment is either ineffective or reversed on a whim. According to Staramopoulos, this has completely confused the legal situation. In just one example, in 2006, the then conservative sports minister and former footballer Jorgos Orfanos introduced a very tough law, which allowed police to take delinquent fans into preventative custody when their team was facing a big game - a strong deterrent for a hooligan. 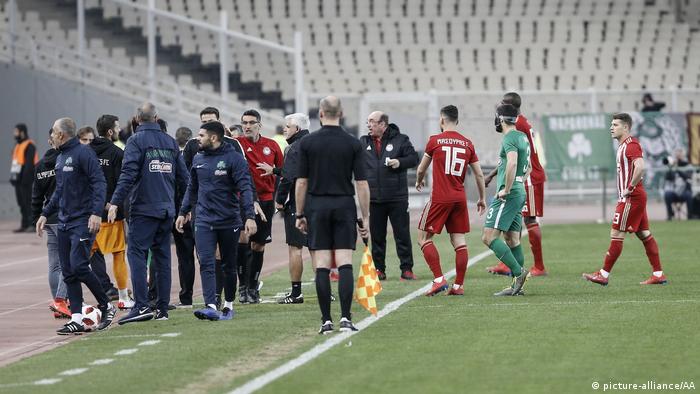 However: "After a government reshuffle, Orfanos' successor in the Ministry of Sport got rid of the law. Then after the government in Athens shifted to the left it was reintroduced in 2015, then put on ice shortly afterwards. And now the new Sports Minister Jorgos Vassiliadis wants to pass the law again."

How much of the blame lies with police?

The police union POASY explained that officers should actually have nothing to do with football. "Professional clubs are private companies and either have to arrange their own security personnel or pay for using the police," POASY leader Grigorios Gerakarakos told DW.

According to Gerakarakos, officers should not be distracted from their normal work and unavailable to taxpaying citizens just because they are helping private companies to fulfil their legal obligations. Currently officers are present in stadiums, yet there are still riots.

Gerakarakos refuses to admit that the police have failed. "Football clubs often push the blame on to the police so they can deflect from their liability," he said. "It's along the lines of: when the police act, they are guilty because they are being authoritarian, and when the police do not act, they are guilty of just standing by." Gerakarakos suspects private interests and political decision-making might be intertwined and getting in the way of stopping the violence. He does want to be any more concrete than that.

Are clubs encouraging violence in stadiums? Staramopoulos won't quite go that far. However, he sees a vicious cycle of fanaticism, which starts with youngsters. It doesn't necessarily come from the clubs, but first and foremost from football-mad parents. It seems to be a question of mentality.

"I repeatedly see dads in the stands who believe their sons to be the new Messi and (teaching them) that they have to completely demolish the opposition. But fair play is a lot different," says Staramopoulos. "Football should be tolerant and democratic, because winning and losing aren't the only outcomes, you can draw as well." Staramopoulos is critical of the fact that young players at an impressionable age don't get that message at all. 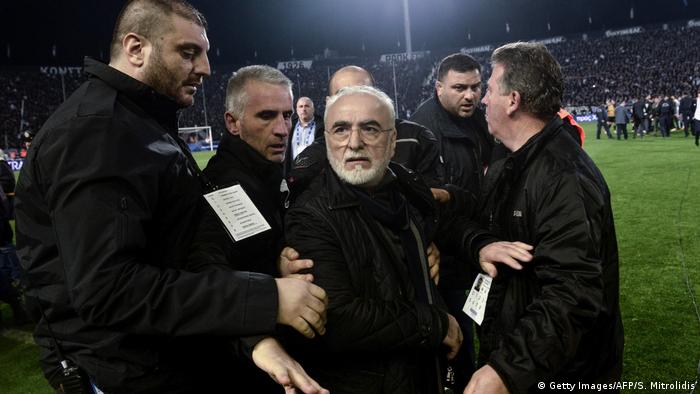 Club's owner charged onto the pitch with a pistol

The most notorious incidence of violence was in 2018. A big game between first-division sides PAOK Thessaloniki and AEK Athens descended into rioting after a controversial offside decision. PAOK owner Ivan Savvidis charged onto the pitch with a holstered pistol on his belt and could only, just about, be calmed down by his own security personnel. After that the Greek Super League was suspended for 16 days.

Sports Minister Vasiliadis pressed in vain for an "agreement with all parties", in particular the club owners, for a new approach. Staramopoulos believes Greek clubs haven't learned anything from 2018. "The so-called agreement with all parties would be an important step for healing football, but it's not happening, because everyone is going their own way," he warns. Only one thing has changed for the better since 2018: crunch encounters are officiated by foreign referees.