Prime Minister Tsipras has announced early elections in an effort to quell rebellion within his party. Many left-wing lawmakers are disappointed with what they see as Tsipras' surrender to creditors' demands. 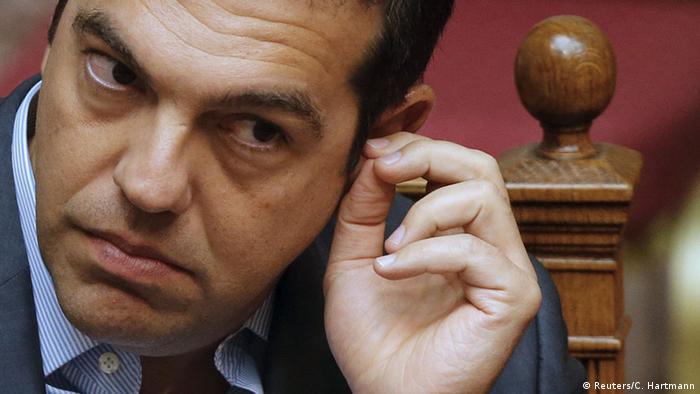 Greece's Prime Minister Alexis Tsipras submitted his resignation and call early elections on Thursday in the hope of stifling a rebellion brewing in his left-wing Syriza party and cement support for the country's third bailout, the first tranche of which was approved by the eurozone on Wednesday.

Saying he would "seek the vote of the Greek people," the embattled 41-year-old explained that "the political mandate of the January 25 elections has exhausted its limits" and thus new elections were necessary for "deep moral" reasons.

Ministers have engaged in marathon debates for days after many hard-left Syriza members refused to support the 86 billion euro ($95 billion) bailout last Friday. It was thought that the parliament might call for a vote of confidence in the prime minister in response, but that idea has been shelved, a government official said.

"Everything is possible," the official told the press.

After campaigning on a platform against bailouts and austerity, last month the prime minister accepted the latest round of bailout funds, along with the attached demands for tax increases and spending cuts, to narrowly avoid a banking collapse. Though the emergency measures were approved by the Greek parliament, the debate laid bare the ire many Syriza members have towards Tsipras for what they see as caving in to creditors.

Despite the rift within Syriza, Tsipras remains highly popular with ordinary Greeks and would likely win an election if it were held now. State broadcaster ERT said the date for the vote would be announced later on Thursday, though it is likely to be sometime in the autumn- before Greeks begin to feel the new bailout measures, like more pension cuts, and after a possible Syriza party conference to resolved differences with the rebels in parliament.

One government official, whose name was not given, told reporters that the election would probably be held on September 20.

"These elections, whenever they are announced by the government, will provide a stable governing solution. My feeling is that Syriza will have an absolute majority," Dimitris Papadimoulis, a Syriza lawmaker in the EU parliament, told Greece's Mega TV ahead of Tsipras' announcement.