The renowned "Zorba the Greek" composer has died. His musical and political voice has cut through Greece's checkered history of war, dictatorship and austerity. 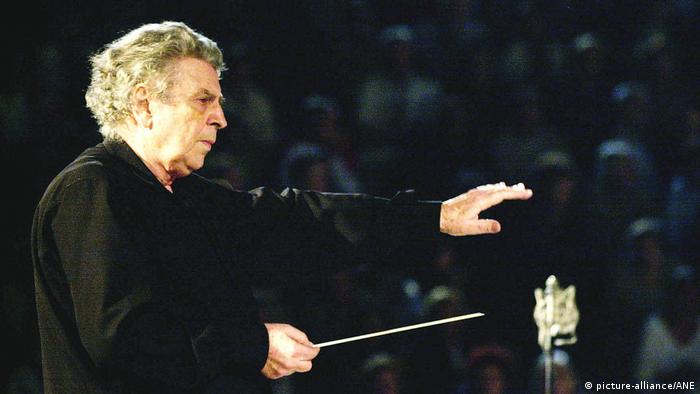 Mikis Theodorakis composed more than 1,000 works and is an icon of resistance against dictatorship

Influential Greek composer Mikis Theodorakis has died at the age of 96 at the hospital, the Greek Ministry of Culture confirmed on Thursday.

Many people associate the composer's name with the famous soundtrack from the three-time Oscar-winning film Zorba the Greek (1964). The music made Theodorakis famous all over the world, and the movie went on to become a classic. For non-Greeks, the "Sirtaki," a dance that appears in the film, became synonymous with Greek folk dancing — although the choreography was invented for the film.

Theodorakis composed a wide body of work, including over a thousand songs, most of them based on Greek poems, that have become a part of the country's cultural heritage. His simple, emotional folk songs rooted in Greek texts and tradition made him a symbolic figure in left-wing circles. Theodorakis also wrote a number of symphonies, operas, chamber pieces and ballet and film music. 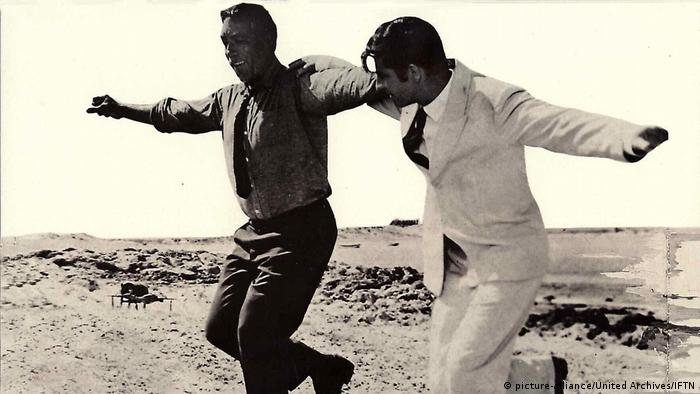 Theodorakis was internationally renowned for the 'Zorba The Greek' (1964) soundtrack

Born on July 29, 1925, on the island of Chios in the Aegean Sea, Mikis Theodorakis composed his first songs at age 13 and gave his first concert at 17. Gripped by classical music, he dreamed of a career as a musician and took courses at the Athens Conservatory. Fate had different plans for him however.

During World War II, Theodorakis fought Nazi German troops occupying Greece. During the Greek Civil War (1946 to 1949), he joined the leftist popular front. Repeatedly arrested for being an opponent of the far-right regime, Theodorakis endured brutal torture, including being buried alive.

Upon his release from the horrific camp on the prison island of Makronisos, Theodorakis was physically broken, but his love for music was undiminished. Finishing his studies in Athens, he continued studies in Paris and completed them with honors.

Theodorakis' breakthrough on the international stage came with the soundtrack for the Hollywood film epic Zorba the Greek and the Holocaust song cycle Mauthausen, sung in 1965 by the then 16-year-old Maria Farandouri, a famous Greek singer and political activist.

As his music inspired the Greeks to search for their own modern cultural identity, the composer continued his political activism as a representative in the Greek parliament.

When the leftist representative Grigoris Lambrakis, whom Theodorakis revered, was assassinated, the composer wrote the soundtrack for the political thriller Z about the founding of the Greek military dictatorship. It was a musical monument to his idol, and once again, the soundtrack was strongly influenced by Greek folk music.

On April 21, 1967, the military junta came to power, and Theodorakis saw himself forced to go underground. As founder of the Patriotic Front, he was once again arrested, tortured and sent to a prison camp.

An international solidarity movement, made up of renowned artists such as the composers Dmitri Shostakovich and Leonard Bernstein, the playwright Arthur Miller and the singer Harry Belafonte, managed to bring about his release.

In 1970 Thedorakis was banished and sent into exile in France. 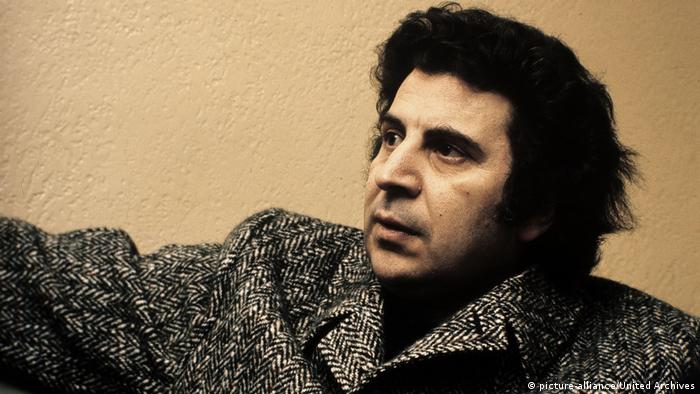 His music had been outlawed in Greece from June 1967, and anyone listening to it had to expect harsh consequences. That, however, did not stop the rebellious Greek musician from traveling the world and performing over a thousand concerts.

During his shows, he spoke out against dictatorships of every kind and gathered support for the resistance against the military dictatorship in his own country. While on tour, Theodorakis was received by politicians such as Gamal Abdel Nasser from Egypt and Palestinian leader Yasser Arafat. The later French President Francois Mitterrand and German Chancellor Willy Brandt also offered him their friendship.

In exile in France, he composed extensive song cycles and his famous musical setting of the revolutionary "Canto General" of Chilean poet Pablo Neruda.

Following the breakdown of the military dictatorship in 1974, Mikis Theodorakis returned to his home country and was celebrated as a hero and an icon of freedom. Before long, however, intrigues were again determining political life in Greece. The composer shifted back and forth from resignation to commitment and from parliamentary activity to voluntary retreat. 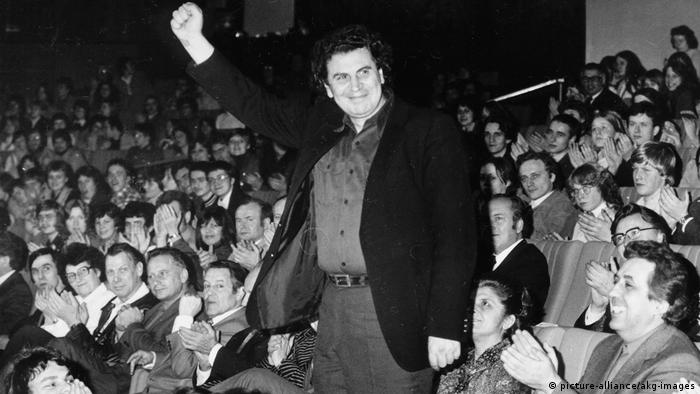 Mikis Theodorakis in East Berlin in 1980

In 1986, he joined the Turkish composer Zülfü Livaneli in founding the Committee for Turkish-Greek Friendship, aimed at ending the centuries-old hostilities between the neighboring countries. Both came under heavy fire for their attempts to create peace — and both were labeled "traitors." But that did not stop them.

From 1990 to 1992, Theodorakis served as a state minister in a parliament consisting of a grand coalition of conservatives, socialists and leftists. He remained committed to reconciling Greeks and Turks while focusing on educational and cultural reforms.

Following his retreat from state politics, Mikis Theodorakis became music director of the Greek Radio Symphony Orchestra and Chorus in 1993, where he often conducted his own works. Following the antique model, he returned to writing lyrical tragedies including the ancient figures of Medea, Electra and Antigone. He left the concert stage in 1999 but continued composing.

Still a sharp-tongued commentator on politics, he vehemently attacked the austerity measures of the Greek government under pressure from the EU.

"We are living through a national tragedy," he exclaimed in 2012. "The Greeks have needlessly been maneuvered towards the abyss." He also repeatedly sharply criticized the US government and Israel's treatment of the Palestinians. 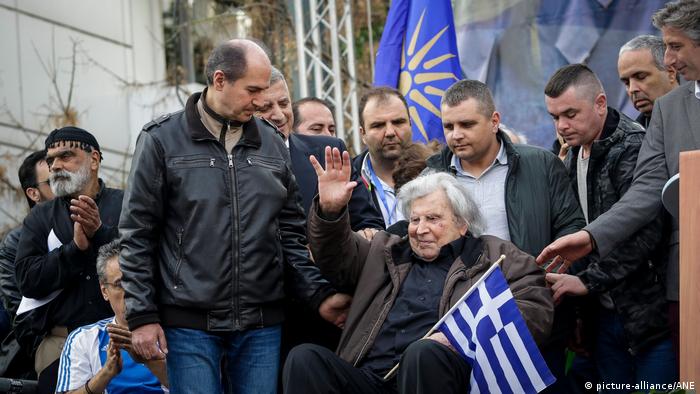 At a political rally in Athens in 2018

In 2003, his criticism of Israeli policy culminated in the statement: "Today we can say that this little country is the root of evil, not of good. That means that too much self-righteousness and stubbornness are evil." In a 2011 television interview, he dubbed himself an "antisemite and anti-Zionist" and declared that "American Jews" stood behind the world economic crisis, which had also reached Greece.

These statements were met with horrified reactions in Israel and beyond. In an apology, Theodorakis explained his position in a letter to the Central Jewish Council in Greece. What he had meant by "root of evil" had been the "unfortunate policies" of the State of Israel and its ally, the US. Having described himself as "antisemitic" had been a mistake made in the course of the very long and fatiguing interview. "I love the Jewish people, I love the Jews!" said Theodorakis.

In an open letter in 2013, a visibly aged Theodorakis announced his "complete retreat as a fighting citizen." After 70 years of struggle, he said, he felt that his views had not been accepted by the people or the political leadership.

But completely refraining from taking a stand would seem not to have been an option. Although he no longer made public appearances, Theodorakis commented on events in Greece on his home page — for instance, during the coronavirus crisis when the government in Athens declined to give financial support to unemployed musicians.

Towards the end of his life, Mikis Theodorakis seemed increasingly bitter, but his musical heritage remains unquestioned. He is seen as one of the most influential musicians of the 20th century.