A narrative of Greek resistance has dominated national historical depictions of WWII, but many Greeks also collaborated with occupying German forces. Now, the long taboo and still controversial topic is open to debate.

On October 12, 1944, the Nazi German army began its retreat from Athens. It had occupied Greece from 1941 to 1944. Far from all Greeks have condemned the military actions of Nazi Germany. While a resistance movement existed, many Greek men also worked together with their occupiers, sometimes for political reasons.

Research looking into collaboration in Greece was considered taboo for decades, as was the case in many European countries. Stratos Dordanas, assistant professor for modern and contemporary European and Balkan history at the University of Macedonia, explained this phenomenon to DW.

DW: How important was the role of the resistance movement in Greece?

Stratos Dordanas: Very important. The Greek People's Liberation Army (ELAS) was the most important guerrilla organization under the direct influence of the Greek Communist Party (KKE). From the very beginning, the Axis Powers, and especially the German troops, were confronted with one of World War II's most difficult problems to solve, namely guerrilla warfare. Closely connected to this was the question of how to deal with the civilian population in occupied territories. So their main goal then was to cut off resistance on the domestic front before it could grow any larger and develop into an uncontrollable threat. 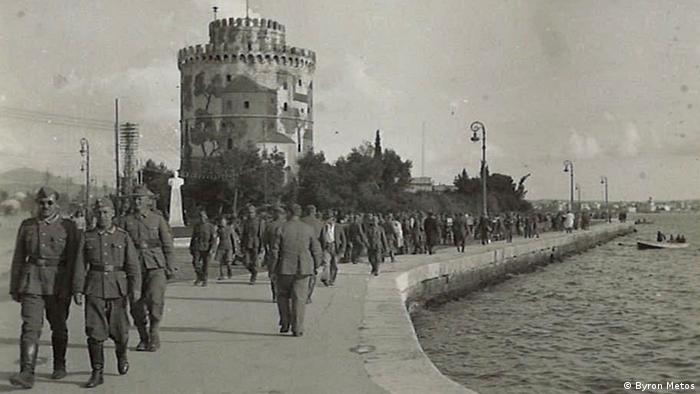 The Greek city of Thessaloniki was also occupied by German troops. They wanted to prevent resistance from growing

How was the resistance organized?

Resistance fighters used villages for recruitment, for supply storage, for cover during ambushes, as escape routes and as sources of information. Occupying troops used drastic measures to try and destroy the links between the resistance and the civilian population.

When the resistance front expanded during 1943-44, the entire country became a field for military operations, and the clear line dividing armed fighters from the civilian population essentially disappeared. Every civilian was a potential enemy, and the principle of collective responsibility was applied.

How widespread was collaboration with the Nazis, and what exactly did Greek collaborators do?

Today we are certain that many Greeks collaborated with German troops and the SS during the war, and for many different reasons. For some, taking up arms was a new adventure, as was adopting Nazi ideology. Connected to that was the chance to earn money as public officials, or to benefit from the distribution of war spoils or wealth that had been appropriated from Jews. Some people also hoped to increase their survival chances under the difficult conditions of the occupation. And others still saw collaboration as the only way to protect their families and villages from the attacks of resistance fighters. 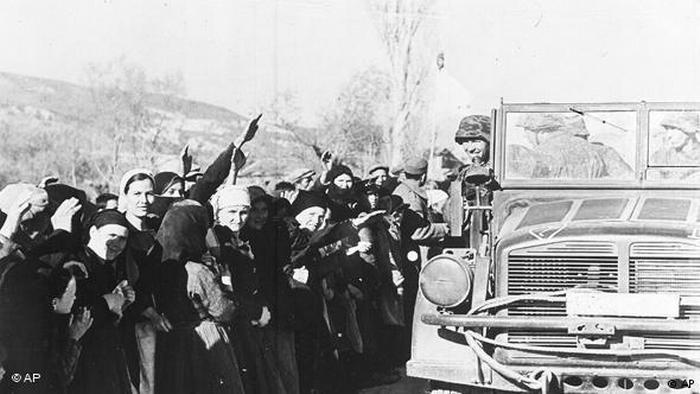 When Germans troops rolled into Greece during WWII, some villagers showed the Nazi salute to their new occupiers

Was there any common denominator behind all of these motivations to collaborate?

Yes, anti-communism. During this period, anti-communism was an important part of Greek society, and it was intensified through anti-Slavic, and especially anti-Bulgarian sentiments. This triggered the patriotic reflexes of an even larger part of the Greek population, which feared that Macedonia would break away to the benefit of Nazi-allied Bulgaria. [After aligning with the Axis powers in 1941, Bulgaria occupied the eastern Greek region of Macedonia.]

How many Greeks supported the Germans?

In total, over 20,000 armed individuals served in numerous battalions. They were the enemies most feared by ELAS and reported to orders of the senior SS and police official for Greece, Walter Schimana.

What happened to collaborators after the end of the war? Were there trials?

After the war, especially from 1945-1950, all surviving security battalion members, as well as Nazi ideologues, were tried. However, it quickly became clear that the Greek state didn't really intend to punish collaborators. Even when serious sentences were handed down, they were repealed by royal decree or parole boards after a short amount of time. That's how starting in the early 1950s former supporters of Nazism were incorporated into the anti-communist state, if they hadn't already been so by fighting in the Hellenic Army during the Greek Civil War [that pitted communist forces against the Greek army from 1946-1949.] Is this a typically Greek phenomenon?

When it comes to punishing Nazi collaborators, Greece is no exception in comparison to other European countries. Armed cooperation with German occupying forces was a European-wide phenomenon that societies wanted to erase from memory following the end of the war. Greece is different when it comes to the low number of people who finally received sentences — though it should not be forgotten that the country experienced a bloody civil war after occupation ended.

It was nearly impossible for me as a journalist to find descendants of collaborators who were willing to speak about their family histories. Why?

As in other European countries, it was considered taboo for decades to research Greek collaboration. Greek historiography painted a misleading and subjective picture that put off professional historians. Ideological polarization from the civil war-era was an obstacle to systematic and objective analytical research on the topic.

In order for this to take place, first and foremost a certain amount of time had to pass from when the collaboration took place because it had threatened national cohesion. In addition, many Greeks who had collaborated with the enemy in a "traitorous" manner then worked within the state apparatus during the civil war. The topic sparks energetic debate even today, while the myth of a unified national resistance, instead of a polarized past, dominates politics and culture. 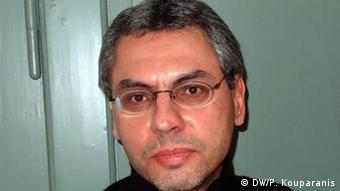 How is history currently being re-examined and worked through in Greece?

The past 15 years of public and academic debate about the 1940s have had consequences. Many questions that were once considered taboo surfaced and were looked scientifically and objectively, under challenging conditions and not without controversy. More universities are now offering courses focusing on the German occupation and the subsequent civil war. Many international conferences have taken place, giving rise to numerous related academic papers. New questions became relevant, and old questions were researched using archives that had previously been closed. This newly awakened interest also spread beyond the academic field into the area of public history.

Greece owes Germany billions of euros. Or is it the other way around? More than seven decades after the end of WWII, Athens and Berlin are still at odds over costs incurred during the Nazi occupation of Greece. (10.10.2018)

The history of modern Greece has been marked by political instability. Here are some of the most important events since the founding of the state in the 19th century to this day. (12.10.2018)