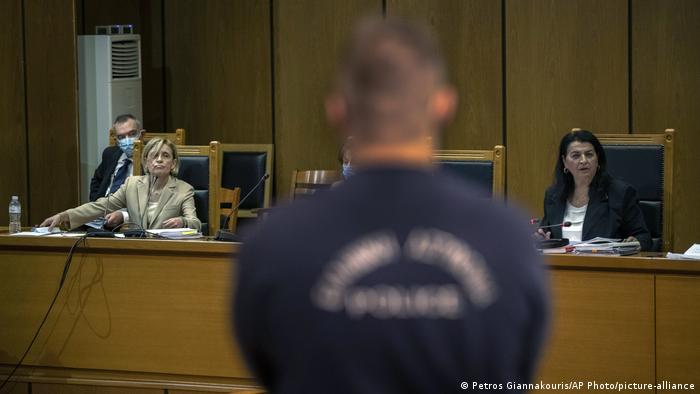 A Greek court has ordered neo-Nazi Golden Dawn leader Nikos Michaloliakos and several of his top aides to begin serving prison sentences with immediate effect, capping one of the most significant legal processes in Greece's political history.

The three-judge panel threw out a plea to suspend the sentences pending an appeal.

Golden Dawn leader Michaloliakos was handed down a 13-year sentence, while six other senior members received sentences of between 10 and 13 years. Eleven of the party's former lawmakers will serve between five and seven years in prison.

Michaloliakos, though, showed no remorse. "I am proud to be sent to prison for my ideas," he said in a statement, while thanking "hundreds of thousands of Greeks who stood by Golden Dawn against a dirty junta." Magda Fyssa, whose son was stabbed to death in 2013 by a Golden Dawn supporter, was overcome with emotion in court

One Golden Dawn supporter was sentenced to life imprisonment after he confessed to the 2013 fatal stabbing of left-wing rapper Pavlos Fyssas, whose mother, Magda, was in court to hear Thursday's decision.

Last week the court found the Golden Dawn leadership guilty of operating the party as a criminal organization and ordering thugs to attack left-wing activists, migrants and Egyptian fishermen, as well as other perceived foes.

The sentencing brings to an end a marathon process which was politically charged and lasted five years.

Golden Dawn was founded as a neo-Nazi group in the 1980s and sat in Athens' parliament for years. Its popularity grew during Greece's financial crisis as it rose to become the third-strongest force in parliament.

But in 2019, the party failed to win any seats in parliament following nationwide elections.

Greece calls Turkey's survey in the Mediterranean a 'major escalation'

Greece has condemned Turkey's decision to send its Oruc Reis research ship back to the eastern Mediterranean. Both nations have overlapping claims for hydrocarbon resources in the region.