A year ago, all eyes were on the Golden Dawn as the group's criminal activities were brought to court. Since then, interest has waned and delays have stalled the trial. Omaira Gill reports from Athens. 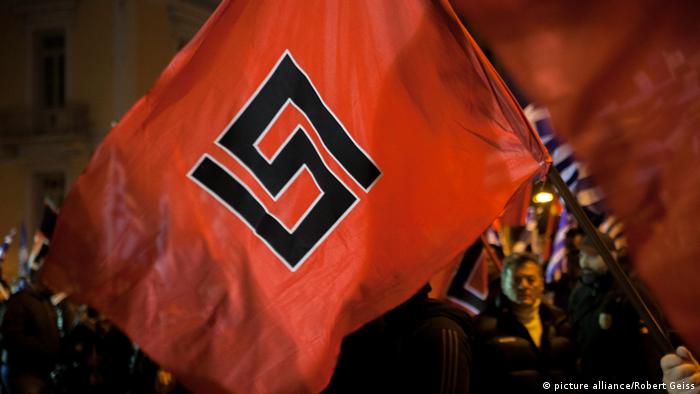 It was billed as Greece's ‘trial of the century' when it started a year ago, with assurances that, despite the country's notoriously slow judicial system, the trial would be over in 18 months. This was the sensational trial of 69 Golden Dawn members, including their leader Nikolaos Michaloliakos, on charges of running a criminal organization. The case file of charges against them ran to over 30,000 pages.

The first court session took place exactly a year ago, on April 20, and was immediately adjourned, setting the tone for a trial marred by delays, inefficiencies, and lately a lawyers' strike which has seen no court sessions take place at all since January 12 this year.

The trial that initially had the public and the media enthralled soon fell off the news agenda as more pressing issues vied for the public's attention. In the year that's elapsed, it gets a passing mention if at all, and almost always in the context of courtroom dramas rather than the gravity of the charges brought against a political party currently serving in the Greek parliament.

It was the death of a Greek left-wing rapper, Pavlos Fyssas, in 2013 which finally spurred the authorities into action after a string of attacks on immigrants by Golden Dawn members. His murderer, Giorgos Roupakias, was held for the maximum possible time for detention without charge under Greek law and released into 24-hour house arrest last month under the shadow of a trial that is going nowhere fast.

According to one of the prosecution lawyers, Thanassis Kampagianis, the trial proper only began in September last year. "In reality the court has been going on for four months if we talk about the court the way people understand the court, not procedural matters, not the lawyers fighting over these things," he told DW.

The constant interruptions from the defense side struck many as a deliberate delaying tactic to bore the public and the media into losing interest, a point Kampagianis agrees with. "It is obvious that the strategy of Golden Dawn is to have as little publicity as possible. There have been incidents inside the courtroom that reveal that this to be the case, threats against journalists and photographers and even physical violence against a journalist," he said. 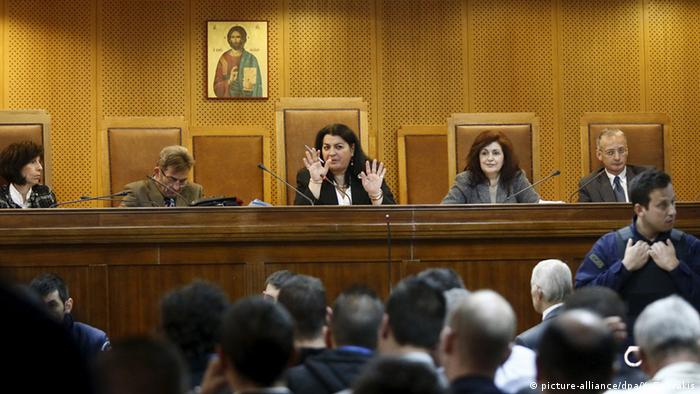 The glacial speed of court proceedings, at one point stalling over the lack of a projector to show video and photographic evidence to witnesses, has frustrated many of those involved, and the solutions reached often come across as nonsensical.

"Something like the projector needs to be decided by court, you can't just bring your own. The court decided that we will first have the witnesses and then we will be able to project the videos, which in the prosecution's opinion is a wrong decision," says Kampagianis.

Then there was the issue of the location of the trial in Korydallos prison, a location with poor public transport connections and away from the public eye. The prosecution have petitioned for the transfer of the trial venue to a more accessible location in central Athens, which is still an ongoing issue.

To add to the delays, lawyers in Greece have been on strike for the last three months in protest of the government's proposed pension reform laws. Kampagianis explains that the Athens Bar Association (DSA) allows the strike to be broken for extraordinary cases. They denied such permission for the Golden Dawn trial.

Stressing that he and the other prosecution lawyers support the strike and have no financial incentive for the strike to end since they are working pro bono, Kampagianis said "My view is that the DSA responded with formalities, not the crucial issue, which is that you have an extraordinary case where you have a criminal organization that has perpetrated all these crimes, masquerading itself as a political party inside parliament. This is an extraordinary case, it's very dangerous for the democratic system, for political and human rights, so there should be a response to the magnitude of this case."

In a cafe near the enormous grey Korydallos prison, Chrysa Papadopoulou and Andreas Tzelis, both prosecution lawyers for the Fyssas family, explain how the family is holding up in the face of the delays. "They are disappointed with how events are evolving, or rather, not evolving," Papadopoulou told DW.

"This trial concerns all of Greek society, not just the loss of the Fyssas family. They are determined to see this trial through to the end," adds Tzelis.

The DSA could not be reached for a statement.

Eleftheria Koumandou, a journalist for Golden Dawn Watch and Athens 98.4 FM, said that of the 132 witnesses in the trial, only 16 have so far given evidence. "We consider the Golden Dawn trial a very important trial and the outcome will have immediate consequences for the social and political life of the country. We consider it a basic point that witnesses need to be supported, especially the migrants coming to testify against this organization. They need to get justice in society, not just in the courtroom," she told DW.

The Golden Dawn defense team responded to DW's requests for an interview by saying that they are not making any statements until the trial concludes. 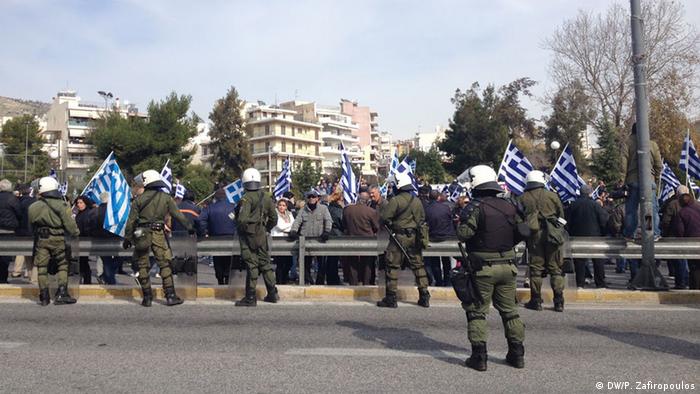 With the trial in limbo, Golden Dawn supporters have resumed their anti-immigrant activities

With talks between lawyers and the government in a deadlock, it's anyone's guess when the trial will resume. In the face of ongoing economic uncertainty and a burgeoning refugee crisis, Golden Dawn are resuming their prior activities. Last week, Golden Dawn supporters at an anti-immigration rally in Piraeus attacked anti-fascists and a journalist, allegedly in full view of riot police who did not intervene.

Golden Dawn deputy leader Christos Pappas had been on the run from Greek authorities since October.

Leaders of the Neo-Nazi party have been sentenced to prison for running a criminal gang. The ruling is the culmination of a trial that has been described as one of the most important in Greece's political history.

Greek delegate Ioannis Lagos has been arrested after fellow European Parliament lawmakers voted to waive his immunity. He was one of dozens convicted of running the far-right party Golden Dawn as a criminal organization.