Government pressure grows on Japanese press | Asia| An in-depth look at news from across the continent | DW | 13.04.2016

For the Japenese media, meeting a deadline is becoming less important than towing the government line. The UN's free speech investigator has even been called in to take account of the situation. 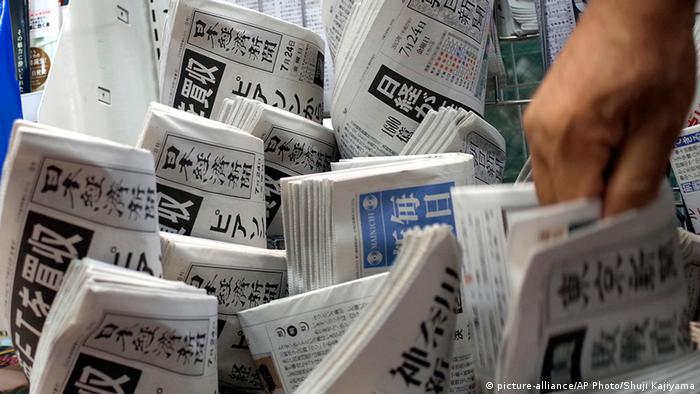 Television commentators play an important role in Japanese politics, especially in shaping public opinion. It didn't go without notice then that multiple well-known pundits have disappeared from the TV screen in rapid succession.

Hiroko Kuniya moderated the program "Close-up Gendai" for 23 years before she was dismissed in March without an official explanation. During a live broadcast, she had posed unplanned questions to a government spokesperson about a controversial new security law.

The law allowed military forces to take part in armed missions led by other nations - a departure from the pacifism enshrined in the country's constitution since the end of World War II.

On his late-night news show last September, Ichiro Furutachi said the legislation was "steamrolled through" by the government. He announced in December that he was stepping down from his moderating role. During his final broadcast in March, Furutachi bemoaned a "growing atmosphere in which I cannot freely comment."

The government only has direct control over the channel NHK, which broadcasts "Close-up Gendai." Its oversight committee was filled with people seen as loyal to the government. The committee's new chairman, Katsuto Momii, has openly said that the channel will follow the government line in key questions of diplomatic importance.

But when it comes to private media, the government more often applies its pressure further behind the scenes to silence critical voices.

TV journalists and their unions have accused the government of exploiting Japan's small divide between politics and the media. For information, journalists rely on close access to ministers and officials, and avoid criticizing them for fear of being blocked out.

At Prime Minister Shinzo Abe's press conferences, attendees and their questions are agreed upon in advance, according to information from foreign correspondents. Abe also invites the heads of Japan's biggest publishers to dinner, seeking to soften criticism on delicate matters.

Individual journalists and programs are often criticized in off-the-record conversations and written admonishments to recommit to neutrality and correctness. "The media should be observing politics, but now the government is observing the media," said popular journalist Shuntaro Torigoe. Broadcasting companies react with enthusiastic obedience. 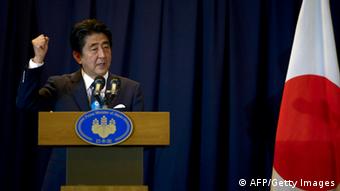 Some broadcasters have already introduced internal controls in case opinions are expressed on their programs that could anger the government. "The suffocation is the result of self-regulation and self-censoring," said veteran TV reporter Shigeonori Kahenira. The media is seeing itself as a pillar of the establishment.

This has made things difficult for David Kaye, the UN's special rapporteur on the freedom of opinion, on his trip to Japan. Broadcasters have been reluctant to explain why commentators have been disappearing from the TV screen. And the commentators have refused to say that they have been fired by their employers. "No pressure was applied," Furutachi claims.

Meanwhile Reporters without Borders, a watchdog organization for press freedom, has grown increasingly critical over the past few years of the situation. Since 2010, Japan has fallen from 10th to 61st in its annual ranking of countries with the freest press.

A former bureaucrat and media commentator has accused PM Abe's administration of using threats and incentives to ensure the Japanese public does not get the whole picture. And he fears a dictatorship is a possibility. (30.04.2015)

Japan's upper parliament has approved a contentious law that removes post-World War II curbs on troops fighting overseas. The issue has sparked protests from pacifists who question the need to join global conflicts. (18.09.2015)