Swedish police believe the series of car fires started by a number of youths were coordinated using smartphones. Police are yet to determine a motive for the attacks, which saw more than 100 cars burned or vandalized. 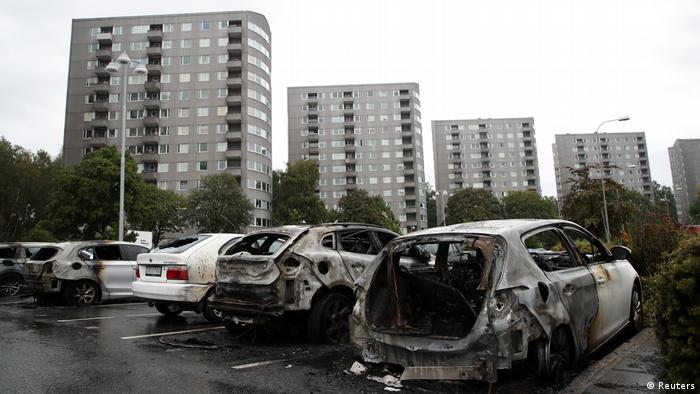 Swedish police on Wednesday said a third man suspected of arson in connection to a wave of car fires in the city of Gothenburg and surrounding towns had been arrested in Turkey.

Ulla Brehm, a police spokesperson for Sweden's west police region, told DW more than 100 cars had been reported burned or vandalized in Gothenburg so far, as well as in the industrial town of Trollhattan.

A handful of fires were also reported in Sweden's third-largest city Malmo.

Two suspects aged 16 and 21 from the Gothenburg suburb of Frolunda were arrested on Tuesday, and a third suspect born in 1999 had been on the run, but was stopped as he attempted to enter Turkey.

"After some intense investigating we actually found out he was on his way to Turkey, so we contacted the police in Turkey and told them that we would like to have this man back for investigation," Brehm said. The man is expected to return to Sweden on Wednesday.

"We know all three of them lived in this area and they are citizens of Gothenburg," Brehm continued, adding that police did not know why one of the men had left for Turkey.

Brehm told DW that Swedish police believe the arson attacks were coordinated using smartphones, but so far have not been able to determine a motive.

"Because the fires started very close together in time, we think they have in some way used their phones, but currently we haven't found an online site or forum showing this," Brehm said.

Across the suburbs of the city of Gothenburg there were up to 30 youths on the streets, and in the city of Trollhattan there were around 30-40 in the group, but only around 20 were involved in the burning and vandalization of cars.

Brehm said that burning cars was "not a new phenomenon in Sweden" during the week before school starts.

"There's always someone setting a car on fire among the young people in these suburbs, but this time there has been so many more," Brehm added.

Concern over gang-related and other violence has heightened in recent months as Sweden heads into national elections on September 9.

The public angst could help Sweden's anti-immigration Sweden Democrats become the second-largest party in the parliament.

The involvement of police in  death of a 69-year-old man in Stockholm prompted accusations of police brutality in 2013, and saw rioting by hundreds of youths in the capital.

Why are Indians protesting against a new military hiring plan? 21.06.2022