Sweden rioting spreads outside Stockholm in sixth night of violence

Rioting in Sweden has spread beyond the capital in the sixth night of violence. Several cities saw cars and buildings set ablaze as police reinforcements in Stockholm sought to contain widespread unrest. 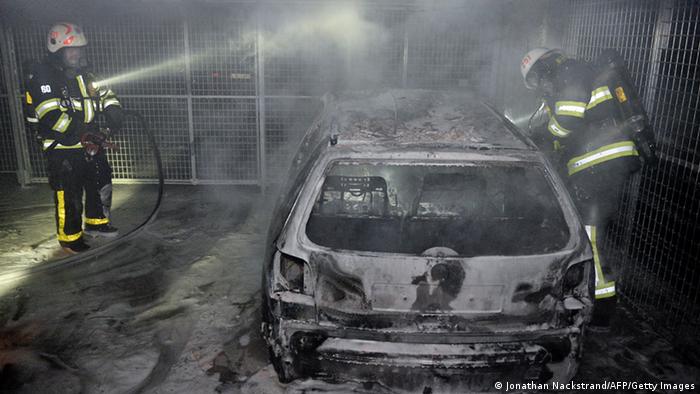 Almost a week-long spate of violence hit the central Swedish town of Orebro on Friday where police reported a fire at a school and several cars set ablaze. Police said masked youths also attempted to torch a police station in the city, which lies 160 kilometers (100 miles) west of Stockholm.

An old building was reportedly also set on fire in the town of Sodertalje less than an hour's drive from the capital.

In Stockholm meanwhile police reported that several cars were set ablaze in mainly immigrant suburbs in what was a comparatively quiet night.

"It is a bit calmer. Of course, there are still fires," said Towe Hagg, a police spokeswoman in Stockholm.

The city's quietist night thus far came after police reinforcements were called from across the country on Friday and dispatched to trouble-hit areas of the city.

On Thursday at least 30 cars and several buildings were set alight including a police station and a school in the northern suburb of Kista. The previous night police were called out to deal with some 90 incidents.

At least 29 people have now been arrested in connection with the violence.

The riots, the worst to hit Sweden in years, have shaken a nation famed for its openness, tolerance and model welfare state. Critics of the Swedish government say they have exposed a widening gap between the rich and poor - mostly young people with immigrant backgrounds. Widening youth unemployment has also been blamed.

Although rioting began on Sunday, tensions have been high in Stockholm since police shot dead a 69-year man in the suburb of Husby earlier this month. Police said the man, reported to be a Portuguese immigrant, was wielding a knife. Immigrant groups, however, have accused the police of heavy handedness.

Britain and the US have responded to the surge in violence by urging nationals against travel to the affected suburbs.