Amid ongoing controversy over a lack of diversity, the Golden Globes were announced via social media last night. "Power of the Dog" and "West Side Story" dominated the top prizes. The usual glitz and glamour was absent during the Golden Globes on Sunday, with celebrities staying away and longtime broadcaster NBC not covering the event after complaints about a lack of diversity and the ethics policies of the Hollywood Foreign Press Association, which chooses the winners.

Will Smith won the best actor in film drama prize for his role in "King Richard," a biopic about the father and coach of Venus and Serena Williams: Nicole Kidman took the best actress award for her portrayal of Hollywood icon Lucille Ball in "Being the Ricardos." 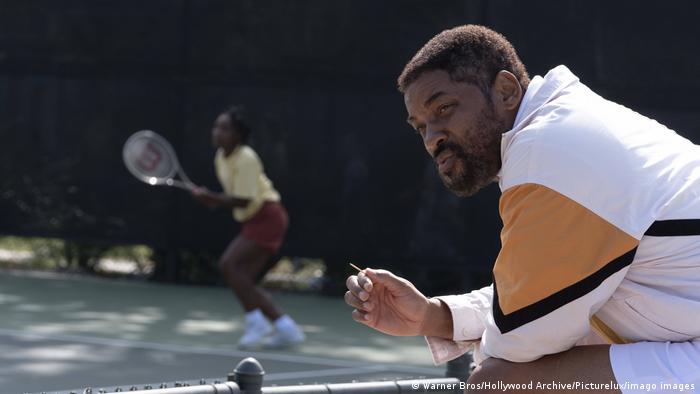 Will Smith won for 'King Richard'

"Pose" star Michaela Jae Rodriguez also became the first transgender woman to win a Golden Globe, taking the prize for best actress in a TV drama. She quickly took to social media to celebrate her triumph.

"This is the door that is going to Open the door for many more young talented individuals," she wrote on Instagram. "They will see that a young Black Latina girl from Newark New Jersey who had a dream, to change the minds others would with love. Love wins."

Among the other television awards, corporate family saga "Succession" took home the best drama award; and "Hacks," about a fading female comedian, was awarded best comedy.

A real commitment to diversity?

Michaela Jae Rodriguez and 20-year-old "West Side Story" lead Rachel Zegler were among the few star performers to acknowledge receipt of Golden Globes, which were announced via social media and a live blog.

Controversy continues to rage around the film and TV showcase that began in 1943, after a February 2021 article published by the Los Angeles Times blasted the press organization behind the event for not having a single Black member on the 87-person body that hands out its awards.

Tom Cruise has since handed back his three awards, while broadcaster NBC has again canceled its commitment to broadcast the gala. Netflix also ended its association with the event.

In May, the Hollywood association voted for sweeping reforms pledging more diversity and transparency, including adding six Black members to the group of more than 100 journalists who decide the second-most important film awards ceremony (after the Academy Awards).

"This has been a year of change and reflection," said Hollywood Foreign Press Association President Helene Hoehne during presentation of the nominations in Los Angeles last month.

During the behind-closed-doors ceremony on Sunday, the association tweeted videos from Arnold Schwarzenegger and Jamie Lee Curtis praising the group's community work.

"I'm proud to be associated with them in this venture," said Curtis, referring to funding by the assocation for community programs.

No longer a party, but still a good Oscars guide

With three wins apiece, "The Power of the Dog" and "West Side Story" confirmed that they will be hard to beat during the upcoming Oscars ceremony in March.

Set in 1920s Montana, Jane Campion's anti-Western "Power of the Dog," starring Benedict Cumberbatch, was released by Netflix with a limited theatrical run. It has been widely praised by critics and already took home the Silver Lion for best film in Venice.

Spielberg's "West Side Story" was also adored by critics, even if it flopped at the box office.