Globalization strikes back after COVID carnage | Business| Economy and finance news from a German perspective | DW | 23.12.2020 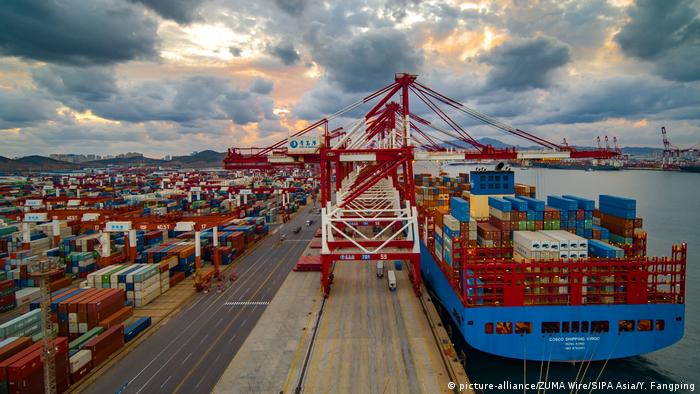 A nondescript German biotech firm founded by scientists with Turkish heritage attracts investment from a Chinese conglomerate and joins hands with a US pharmaceutical behemoth helmed by a Greek chief executive. The companies source a key raw material from a tiny family-owned firm in the Austrian countryside and crank up assembly lines in the US and Belgium to produce the most-anticipated item of the year — a COVID-19 vaccine.

The BioNTech-Pfizer vaccine — incidentally first administered to a British nonagenarian after its approval in the UK — and the other coronavirus shots being developed in record time are being viewed as a perfect retort to detractors of globalization, those who sounded the death knell for international commerce and cooperation at the height of the pandemic.

The coronavirus disrupted global supply chains, shuttering factories, emptying shelves in supermarkets and leaving countries clamoring for essential medical supplies. The crisis exposed the overreliance of companies and governments on China-dominated global value and supply chains, even when it came to essentials such as medicines. Many predicted a permanent retreat for globalization, predicting companies would move back production to their destination markets.

Months later, there are hardly any signs of so-called reshoring. On the contrary, global trade is witnessing a spectacular rebound, led by usual suspect China — the controversial poster child of globalization. The world power is experiencing massive demand for its protective gear and work-from-home tech products. 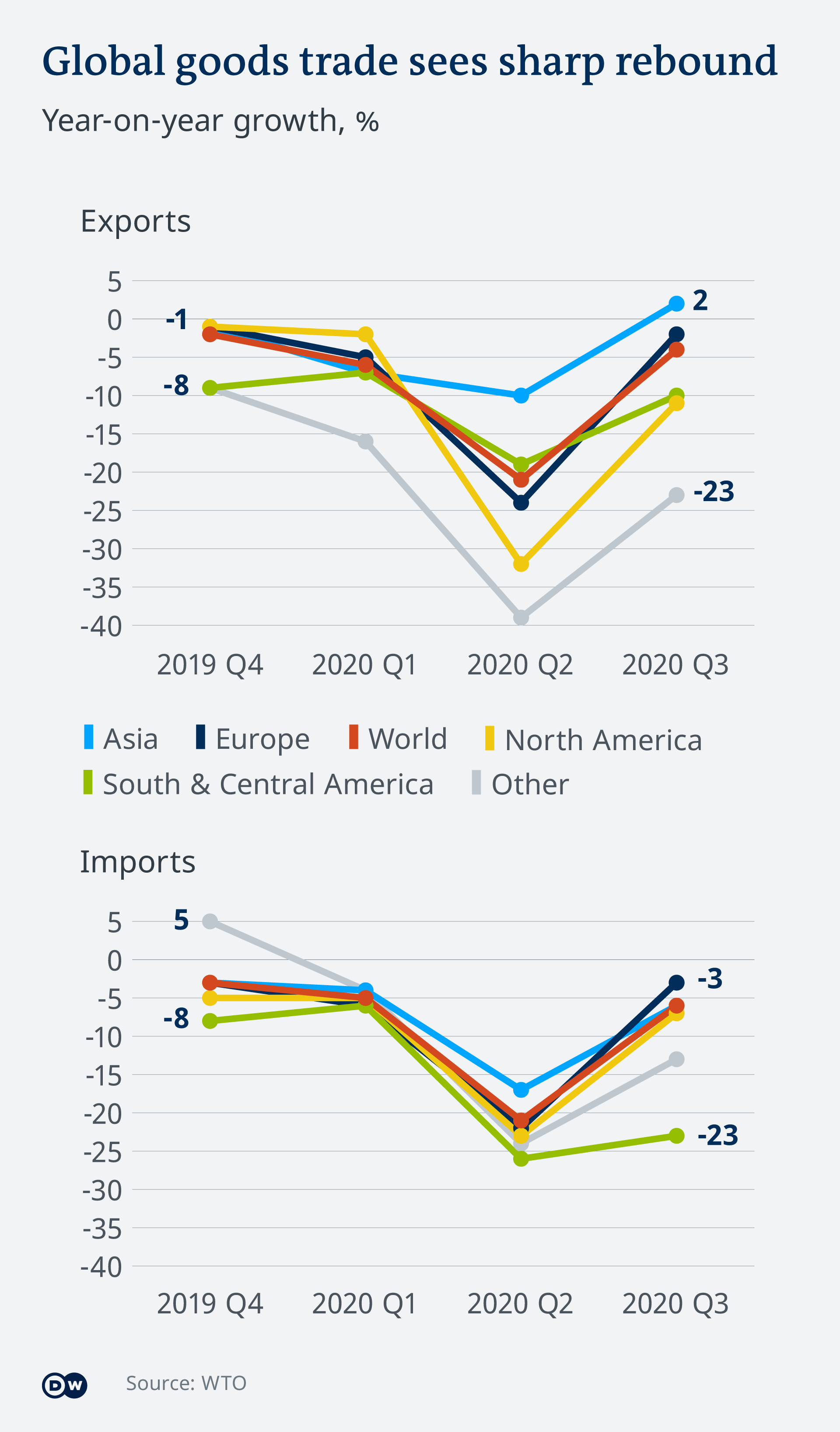 "[There is a] recognition that trade actually provides a very positive and helpful, efficient solution to the kind of challenges that these kinds of crises raise," World Trade Organization (WTO) Chief Economist Robert Koopman told DW. "Countries recognize that having a diverse supply chain is a good thing and that being able to draw upon the capabilities and expertise of other countries and their resources can help you solve your problem."

The WTO expects global goods trade to drop by a little over 9% this year, followed by a rise of about 7% next year. In April, it had forecast a slump of as much as 32% for 2020. The sharp recovery means that the impact of the pandemic on trade compared to GDP has been much less severe than was seen during the global financial crisis of 2008-2009. Services trade, however, is expected to remain worse off, hurt by restrictions on travel and tourism.

The rebound in goods trade has been driven mainly by strong demand for imported goods, aided by governments turning on the money taps as well as a drop in spending on dining out, entertainment and travel.

Reshoring only in speculations

While critics of globalization might have jumped the gun with their dire predictions, the pandemic has shown just how vulnerable firms can be in a globalized world, especially if they don't keep a proper tab on their suppliers.

Supply chain experts say the current outbreak could prompt companies to make their supply chains more resilient by boosting inventories, enlisting alternative suppliers — likely closer to destination markets — and using data and technology to keep a better tab on even their lowest-tier suppliers and customers.

However, not many see firms recoiling their supply chains to their domestic markets, given just how complex existing value chains are. A single multinational company can have thousands of independent suppliers. Putting all their eggs in one basket would only expose the firms to much bigger shocks in the event of environmental crises like hurricanes, wildfires and droughts, which are much more localized.

"Reshoring is costly. You have limited resources and if you re-shore a lot of activities, you're reallocating resources to things that are probably not a good use of them, even if they may strike some sort of chord in terms of creating a defense mechanism for the next pandemic or the next crisis," Koopman said. "The problem is you don't know what the next crisis might be."

It's 'slowbalization' all the way

Globalization witnessed a dream run between 1990 and 2005, when international trade grew twice as fast as GDP growth, propped up by the opening of the Chinese, Indian and European planned economies, the creation of the WTO, and the advancement of regional trade agreements.

Globalization has been losing steam in recent years amid criticism that the fruits of globalization were being unevenly distributed, prompting some economists to dub it "slowbalization." Koopman feels the heyday of globalization may well be over, pointing to fewer big opportunities for regions to open up for trade.

However, he expects a burst of trade once the pandemic is controlled, as economies recover from the worst recession since World War II. China, which saw a record trade surplus in November, will continue to see strong global demand for its goods.

China's outsized role as the world's factory would diminish somewhat over the next five to 10 years. The disruption caused by the pandemic is expected to cause firms to diversify their sources of supplies out of China — a trend that was visible well before the coronavirus thanks to US-China trade tensions and rising labor costs in the country. Record exports out of China is only going to worsen global imbalances, which could then reignite trade tensions.

Experts say people's penchant for low costs and companies' fixation with profit margins would continue to underpin globalization, and that the pandemic is only going to reinforce their obsession.

"I would like to say, we will come back cleaner, we'll come back greener, will come back with a little less focus on cost-cutting. But the problem is that you are expecting people to pay extra for that," said Deborah Elms, executive director at Asian Trade Centre. "Then you have the question coming out of COVID: can firms and consumers afford to be spending more in a post-COVID world than they spend now?"

Elms says companies, which have seen their balance sheets disrupted by the pandemic, are only going to focus more on keeping their costs under check going forward.

But it's hardly going to be the wild rush for efficiency that was seen during the 1990-2005 period when firms largely ignored the risks in pursuit of maximizing their profits. The twin shocks — the US-China trade war and the pandemic — would prompt firms to have a backup plan to deal with the risks posed by global value chains even as they look to cut costs.

"What it results in is what I call reglobalization," Koopman said. "It is actually a reorganization of globalization where risk is playing a bigger factor rather than just efficiency."

Globalization will continue to witness a pushback, especially in strategic sectors like pharmaceuticals, mining, and technology; and COVID-19, which has led to millions of job losses, is only likely to prompt some governments to double down on protectionism.

Elms expects a rise in protectionist tendencies related to the distribution of COVID-19 vaccines and the availability of food if the pandemic persists longer and if there are problems with the vaccine roll-out.

"Countries, where the intent towards protection might always have been there, now have a license to be super protectionist," she told DW.