A ban on fishing the huge winged manta ray fish has been declared in Indonesian waters. An ecotourism agreement setting up a large sanctuary has been signed by Indonesia's government and conservationists in Jakarta. 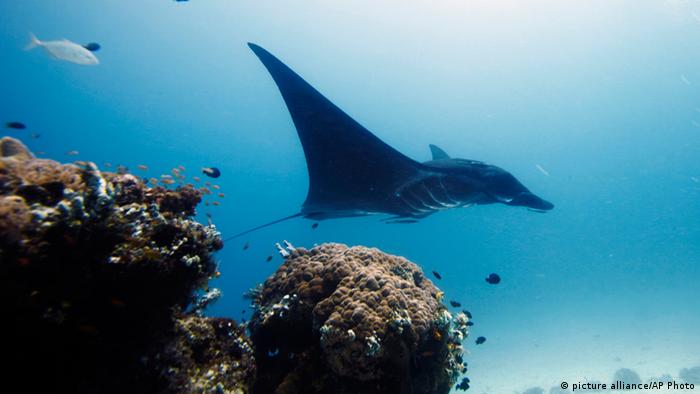 For years, Indonesia had been the world's largest ray and shark fishery, partly due to demand from China for manta gills for use in traditional medicine.

Many of Indonesia's foreign visitors dive to view the creatures. The group Conservation International said the "bold" move has backed by recent research findings that such ecotourism generates revenues worth millions.

Manta rays have wingspans of up to 7.5 meters (25 feet) and used their flaps to propel themselves gracefully through the water. They have the largest brain to body ratio of any fish and show little fear of humans.

"Given the huge area of reefs and island of our country, if managed properly, Indonesia could become the top manta tourism destination on the planet," said Agus Dermawan of Indonesia's marine affairs ministry.

The leader of the Indonesian Manta Ray Project, Sarah Lewis, said the "forward- thinking" move will safeguard the vulnerable species and provide economic benefits for local communities for "generations to come."

Key populations are located near the resort island of Bali, Flores island in eastern Indonesia and Raja Ampat off the northwest tip of New Guinea island.

Manta rays thrive over coral reefs on their abundance of tiny sea animals.

Delegates at a global wildlife conference have voted overwhelmingly to extend protection of five threatened species of shark. Demand for shark fin soup from Asia has led to a decline in species numbers across the world. (11.03.2013)

In Thailand new holiday resorts and tourism projects are designed with sustainability in mind. (20.01.2012)

The population of northern Ethiopia is using sustainable fishing practices and eco-tourism to protect precious Lake Tana and at the same time eke a living from it. (21.01.2014)