An 11-year-old boy is at the heart of an initiative that will see children plant 1 million trees planted across Germany by the end of the year. 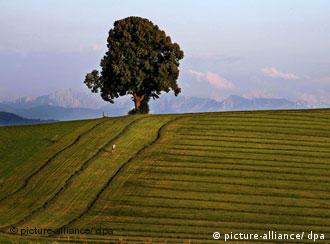 Felix Finkbeiner might look like an ordinary, shy 11-year.old, but in the space of two years he has achieved an extraordinary feat. By 2010, he will have inspired thousands of children from over 500 schools around Germany to plant 1 million trees.

Felix said he decided to let children do the talking the UN campaign to plant a billion trees, which began in 2003. Felix said he was surprised by the knock-on effect he had by focusing on children.

"I never thought that when I started this project it would go so fast, to plant all those trees and that it would spread to other countries as well," he said. 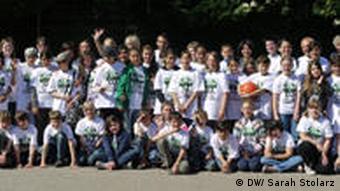 Felix has motivated thousands of kids to plant trees

Just over two years ago, Felix was asked to do a school presentation on climate change. During his research, he came across the work of Nobel peace prize winner Wangari Maathai, whose Green Belt Movement saw 30 million trees planted in 12 African countries in as many years. If Wangari Maathai could achieve all that, Felix said, then surely the students in Germany could manage planting a million trees.

He now travels the country giving presentations to like-minded fellow students. Children attending these meetings gather all the information they need to take part in the tree planting program and to spread the word in their own schools.

Inspired by Al Gore’s film "An Inconvenient Truth," Felix’s father abandoned his business 15 years ago to found an environmental awareness company with his wife, which is now run from the family home. Frithjof Finkbeiner said he thinks this has definitely influenced his son. 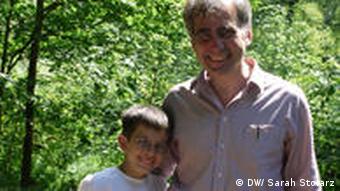 An inspiring role model: Felix with his father Frithjof Finkbeiner

Felix's two sisters Franziska, 12, and Florina, 10, have also been involved with the project from the start, but it is Felix who has become a spokesman for the Plant for the Planet project.

"I guess I’m just not as scared to talk in front of a microphone and give presentations," he said.

Felix's efforts have not gone unnoticed and his calendar is filling up fast. He has been appointed European representative on the junior board of the UNEP and has been invited to the upcoming G8 summit in Italy this July. Trips to climate conferences in South Korea and Austria are planned over the next few months. 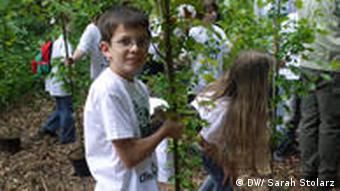 Now Felix is an old hand at giving presentations and interviews, including at the EU Parliament and alongside Nobel Peace Prize winner Al Gore. That's all in addition to spending every second weekend travelling to meet more students around Germany.

Despite his frequent absences, officials at the international school Felix attends have supported his work and encouraged him to make his first presentation to other students. His good grades and obvious desire to learn more about the world make it easy for the school to support him.

"Felix was always eager for knowledge," said Ingo Maxeiner, a long-time friend of the Finkbeiner family. "He looked carefully at everything around him and asked questions. How things work has always been his primary fascination."

After finding out more and more about how the climate works, Felix has set new goals for himself.

This will be made all the easier with the launch of an interactive Web site in September. It will allow children across the globe to keep abreast of tree-planting activities in their area and contact other children who also want to get involved.

As for the less immediate future, Felix is a realist when it comes to tackling the problems of carbon dioxide emissions and climate change.

As talks on technology's role in fighting climate change begin in Norway, many see carbon capture technology as a way of helping the environment. It's permitted in Germany, but environmentalists are critical of the plan. (27.05.2009)

Business and political leaders must agree a successor pact to the Kyoto Protocol this year "because Mother Nature does not do bailouts," climate campaigner Al Gore told a business conference on climate change on Sunday. (24.05.2009)

Plant for the Planet