Germany's women's football team have wrapped up qualifying for next year's European championship with a 1-0 win in Hungary. However, the Germans needed an own goal to keep their perfect record intact. 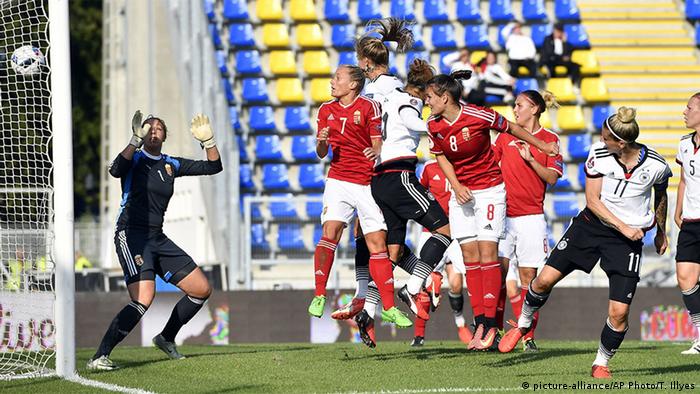 The own goal scored by Hungary's Viktoria Szabo in the 29th minute was all Germany needed in Gyor on Tuesday as new coach Steffi Jones wrapped up their qualifying campaign with a perfect record.

The Germans won all eight of their European qualifying matches, scoring 35 goals and conceding none, however it was a somewhat disappointing performance from the Germans, who had thrashed Hungary 12-0 when the two teams faced each other in Halle one year ago.

"We were not precise enough in our play, so we made things difficult for ourselves," Jones told public broadcaster ZDF after the match. "We gave up possession a lot and often didn't find the optimal solutions."

At the same time, though, Jones, who took over from Silvia Neid as head coach after Germany won goal at the Rio Olympics, said she was basically happy with her team's performance. "The team did their best," she said.

The UEFA Women's EURO 2017 is to be hosted by the Netherlands next summer.