Silvia Neid signs off as Germany coach with Olympic gold after her side deservedly beat Sweden 2-1 in the Rio Olympic final. Canada defeat bereft hosts Brazil to seal the bronze medal. 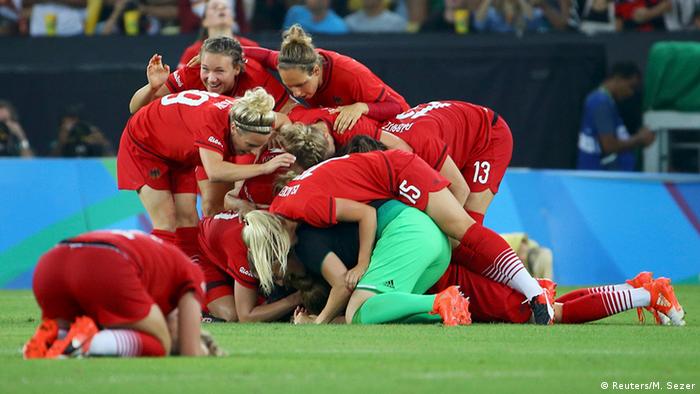 Germany's women's soccer team has finally clinched the gold at an Olympics having previously only managed three bronze medals.

They were the better side for much of the final at the Maracana in Rio, with Dzsenifer Marozsan grabbing the opener with a deflected curling effort from the edge of the box after 48 minutes.

A comical own goal from Sweden's Linda Sembrant, when she directed the ball into the goal after it had come back off the post following a free kick, increased Germany's lead just after the hour.

The Swedes, who had shocked both holders the United States and hosts Brazil on penalties on their way to the final, pulled one back on 67 minutes through Stina Blackstenius.

They then besieged the German goal in the closing minutes but Neid´s team clung on.

It was a deserved win, given European champions Germany had also gone very close to further goals through Melanie Leupolz and Anja Mittag.

Neid, who is to become head of scouting at the German FA, is stepping down after being in the head coach role since 2005. She will now hand over to Steffi Jones as an Olympic champion, having also presided over a 2007 World Cup triumph and two Euro wins.

In the bronze medal match in Sao Paolo, the Brazilian women suffered more torment as they went down 2-1 to Canada.