German Foreign Minister Frank-Walter Steinmeier has met with President Recep Tayyip Erdogan on a tricky trip to Turkey. In a press conference with his opposite number, Steinmeier said he hoped ties would soon normalize. 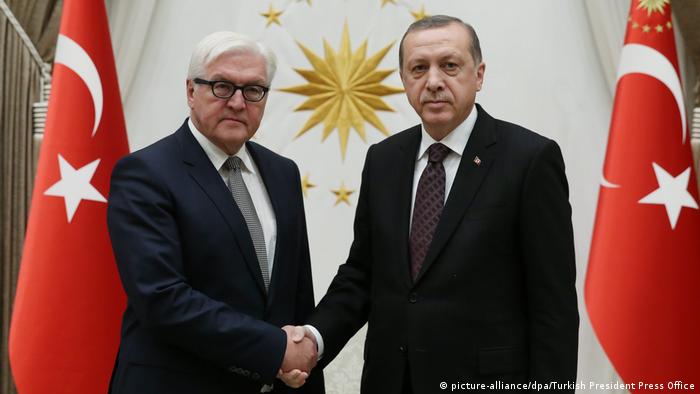 Germany's foreign minister and likely next president, Frank Walter-Steinmeier, arrived in Turkey on Tuesday morning amidst a period of particularly frosty relations between the two countries.

During a joint press conference with his counterpart Mevlüt Cavusoglu, Steinmeier said he was "irritated" by Erdogan's accusation that Germany harbored "terrorists" liked to the banned Kurdistan Workers Party (PKK).

However, he thanked the Turkish foreign minister for "what was not exactly an easy discussion" and expressed his hopes that ties between the two countries would soon "return to their previous condition."

"I reported the worries that we have about the numerous arrests, mass arrests, and freedom of opinion and freedom of the press," he told reporters. Earlier in the day, Steinmeier met with intellectuals who campaign for human rights and press freedom in what appeared to be a sign to Ankara that Berlin does not approve of the post-coup attempt crackdown on journalists and civil servants.

Cavusoglu then made the surprising announcement that Erdogan had issued a last-minute invitation to Steinmeier for a private chat along with Turkish Prime Minister Binali Yildirim.

The German Foreign Office noted in a tweet that "difficult issues" were on the agenda.

The head of Germany's domestic spy agency rejected Cavusoglu's charge that Germany was harboring militants with ties to the PKK, telling Reuters news agency that the accusation was "completely unjustified."

"We have been working for many years to ensure that the PKK in Germany poses no danger to Germany or Turkey," Hans-Georg Maassen told Reuters on Tuesday.

Erdogan's administration has accused Chancellor Angela Merkel and her government of not showing enough solidarity in the wake of the crisis. Berlin, meanwhile, has been consistent in its disapproval of mass purges across Turkey that has seen more than 100,000 military officials, judges, civil servants and academics dismissed from their positions. Under the same auspices, Ankara has silenced dissident voices in the press and shuttered leading news outlets.

Turkey to decide on EU membership

During the tense press conference with Cavusoglu, Steinmeier said he did not support stopping European Union accession talks with Turkey.

"The question of whether Turkey goes closer to, or further away, from Europe is not a decision for Europe of the European capitals but should be made in Turkey," he told reporters, adding that he was in favor of a "better relationship."

His Turkish counterpart, however, said his nation was "fed up" with EU criticism and "double standards."

"We are truly fed up of these statements degrading Turkey. The criteria are clear but there are double standards and a two-faced approach. This is what we don't like," Cavusoglu said. His comments come after the EU released a highly critical Turkey membership progress report last week which said the nation was sliding back on democracy, rights and rule of law.

Cavusoglu repeated that the Turkish people will decide on whether or not the death penalty will be reinstated - an issue which could spell the end of Turkey's accession bid.

The pair also discussed the contentious situation at Incirlik airbase, a key station for the US-led coalition fighting "Islamic State" terrorists in Syria. German delegations have been repeatedly turned away from the base since factions of the Turkish military tried to overthrow the government of President Recep Tayyip Erdogan in July.

Berlin has been clear about its stance on press freedom and rights violations in Turkey. Norbert Röttgen, a member of Merkel's Christian Democrats (CDU) and a chairman of the parliamentary committee on foreign affairs, has said that he was unsurprised that "President Erdogan would use this coup to consolidate his power mostly by eliminating constraints and the opposition."

Steinmeier himself said ahead of his trip that he would press the issue: "When the existence of civil society is threatened, then democracy is also threatened."

"That is our experience. We Germans know how important constitutionally guaranteed freedom is for journalism, culture and science. We also know how dangerous it is when these free spaces are closed off."

The foreign minister's trip comes on the heels of the announcement that the ruling SPD-CDU coalition would put forward his name for the German presidency when Joachim Gauck reaches the end of his term next year. Steinmeier, who is unlikely to face much serious competition for the job, has expressed his gratitude at support "across the political spectrum."