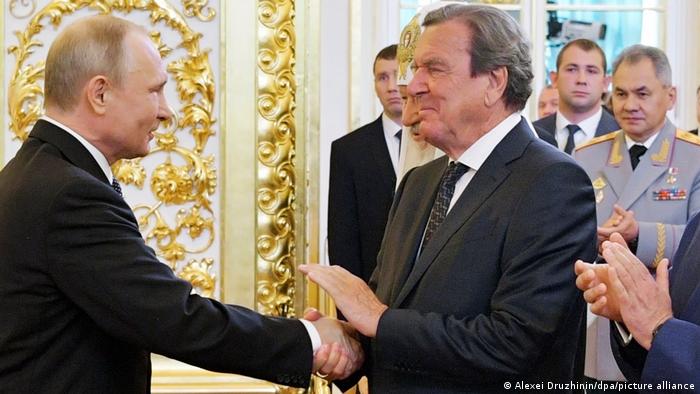 Schröder has been under fire for his close ties to the Kremlin and the Russian energy sector since Moscow launched its invasion of Ukraine in February.

A party arbitration committee noted that any disciplinary action must be prompted by a violation of the SPD's "statutes, principles, or rules" which would then allow the committee to decide whether such a violation has caused serious damage to the party.

In their statement, the committee said it would be "incompatible with an SPD membership" to call for a war of aggression or to justify an invasion. However, according to the party arbiters, Schröder has not done so.

"Rather, on the day of the Russian invasion of Ukraine, [Schröder] declared that Russia's security interests did not justify the use of military means," they said.

While it would have been "desirable and appropriate" for Schröder to take a clearer stance, the committee found that his statement was not too far removed from the SPD's political program.

The decision can be appealed within two weeks.

How was the decision made?

Schröder's fate within the party — of which current Chancellor Olaf Scholz is also a member — was decided by an arbitration committee in the northern city of Hanover.

The committee had been mulling the decision for several weeks after it received 17 motions for Schröder's expulsion from different regional organizations of the party.

Schröder did not personally appear at the hearings and did not send a lawyer.

Talking to DW, SPD deputy in Germany's Bundestag Holger Becker said that Schröder was "totally isolated" within the party, but expelling him would mean overcoming significant legal hurdles.

"It's pretty clear that everybody is actually hoping that he's leaving the party voluntarily, because indeed there is very little common ground these days with his positions," Becker said.

Why has Schröder come in for criticism?

The 78-year-old, who was German chancellor from 1998 to 2005, chairs the board of the Nord Stream pipeline company.

Russia's invasion of Ukraine has led to huge public pressure for the former chancellor to sever his lucrative ties with Russia's energy giants.

In 2017, he was named chairman of the supervisory board for the Russian state oil company Rosneft — a position Schröder finally gave up in May bowing to pressure at home. He also rejected a nomination to the board of Russian energy company Gazprom.

While Schröder has said Russia has made a mistake with its war in Ukraine, he has refused to condemn his close friend, Russian President Vladimir Putin.

The German parliament in May stripped Schröder of his office and staff in Berlin, usually a provision made for former chancellors.

Last week, Schröder called for negotiations with Putin, saying: "The good news is that the Kremlin wants a negotiated settlement."

He also urged Berlin to reconsider its position on the new Nord Stream 2 gas pipeline, which is ready to pump gas but had its operation blocked by the German government.

On Sunday, Ukrainian President Volodymyr Zelenskyy said it was "disgusting" for former European leaders to work for Russia, in an apparent reference to Schröder's comments.

"It is simply disgusting when former leaders of powerful states with European values work for Russia, which is fighting against these values," Zelenskyy said in the video address, without referring to Schröder directly.