Much of Germany has seen vaccination rates slow. The state of Bremen, however, has seen an impressive vaccine uptake. A dispatch from the north of the country. 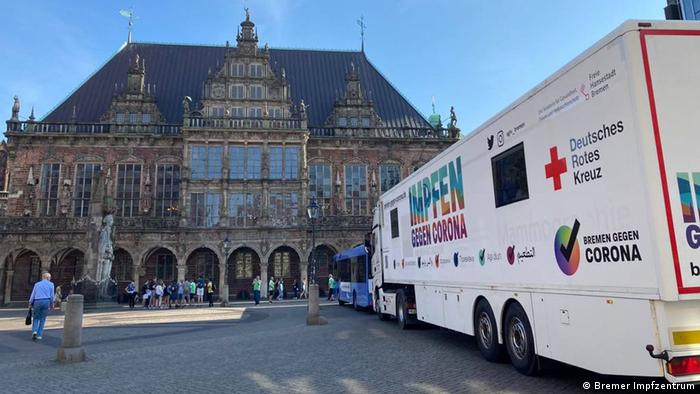 Bremen has gone the extra mile to get shots in arms

German Health Minister Jens Spahn recently praised Bremen, saying "if we had the vaccination rates of Bremen throughout the whole country, we could be following the Danish path and return to normality."

This should be music to the ears of Bremen's lawmakers. But the state's Health Senator Claudia Bernhard, who is largely responsible for the successful rollout, was not even aware of Spahn's remarks. Bernhard, a member of the Left Party who has been in office for two years, said the vaccination drive worked well because local businesses, administrators, aid agencies and volunteers agreed to cooperate closely.

The fact that 78.4% of Bremen's citizens have been vaccinated is surprising. The city state, after all, is the poorest out of all German states and has struggled with its education sector and public debt. But the region, which encompasses the cities of Bremen and Bremerhaven, is home to just 700,000 people. Its compact size may have given it an advantage in convincing the undecided to get a jab. 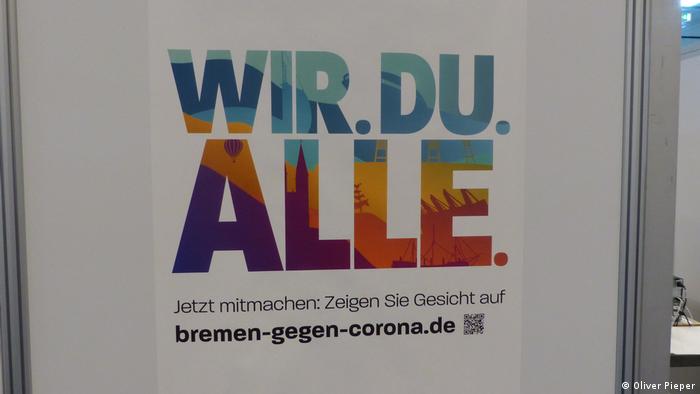 The sign reads 'We. You. Everyone,' reflecting the state's focus on solidarity

There is a tangible sense of pride in Bremen. "There was a conviction that we need to move ahead swiftly with vaccinations," said Bernhard. "Locals are proud to be leading Germany's vaccination drive." One reason for the program's successes, she said, was that Bremen decision-makers opted for an "unbureaucratic and flexible approach."

This means Bremen has been spared many of the problems that have beset other German states during the vaccination rollout. Everyone has received postal invitations to get a shot, and getting through to the telephone help line has not been an issue. Bremen was also the first state to break down outbreaks by neighborhood, improving the ability of authorities to track and control hot spots.

Bernhard would love to stage a huge party to celebrate Bremen surpassing the 80% vaccination threshold. But she is also eager to see even more locals get the shot. "We can push up the rate even further — something between 80% and 85% should be achievable," she said. For now, Bernhard has had letters sent to every citizen, thanking them for their decision to get vaccinated.

Bülent Aksakal is one 11 public health workers tasked by the state to help further increase vaccination uptake. The 41-year-old has been out and about in Bremen's poorest district of Gröpelingen to educate locals about the vaccine and dispel potentials fears.

"Young people are especially hesitant because they have little awareness of the dangers," said Aksakal. He explained that they doubt they will develop severe cases of COVID-19, and fail to understand that vaccinations are also about showing solidarity with others.

In Gröpelingen, about every second child grows up in poverty. Most people here live in cramped homes, making ends meet working low-paying jobs. Life expectancy is about seven years less than in Schwachhausen, an affluent district not too far away. In the past, Gröpelingen has seen infections spike. Winning the war against the virus will hinge on promoting vaccinations in this area.

Northwestern Bremen is home to many residents of Bulgarian, Romanian and Turkish descent. Many of their parents' generation moved here to work in the shipyards. Among them were Aksakal's parents, who came to Bremen from Turkey. This background has helped Aksakal, who was born in Bremen, to connect with other residents with foreign roots.

"You need to develop a connection and be able to communicate," said Aksakal. Knowing the right gestures and facial expressions to engage in dialogue is key in these neighborhoods, he added.

How was Germany's vaccination 'action week'?

When the city launched its first vaccination day in central Gröpelingen in late May, some 4,300 people showed up to get a jab. It was a major success. Many of those who got vaccinated later went home and convinced their loved ones to follow their example. Aksakal, who also runs a soccer club for Gröpelingen's kids, said it's essential to establish a rapport with locals. Talking to residents in person, and explaining the benefits of vaccinations during integration classes, is helpful in reaching as many people as possible.

Many of those willing to get the shot sooner or later end up in the hands of Leonie Schlee and Arne Saak — or rather their staff. The duo head Bremen's vaccination center, but they say Bremen's success rest on many shoulders.

"During the busiest times, we finished at 11 p.m. and started again at 8 a.m. the next morning. But then you look at the statistics, showing that Bremen is still No. 1," said Schlee. In May, the center administered a record 5,500 shots in one day. Germany's smallest state has managed to set up the country's largest vaccination center, with 96 booths. Today, the center administers around 1,000 shots per day.

Today, the waiting area is busy: there's a health care worker getting her booster shot, a woman who works in the entertainment industry who does not want to be excluded from society and a man from Ghana, who tells DW that many people in his community believe they would die after getting the shot.

The vaccination center even offers appointments for sailors, and hundreds of them have been inoculated in a mobile truck parked at the harbor. "They were crying with joy, as they often come from countries that cannot gauge when they may be able to offer vaccinations," Schlee told DW.

The center is scheduled to close on October 22, but the trucks will continue to offer mobile vaccinations, targeting certain districts.

Bremen can 'weather a crisis'

David Monte, head of personnel at the Atlantic Hotel Group and Christian Seidenstücker, managing director of the events agency Joke, also contributed to Bremen's unusual approach — they provided some of the staff working in the vaccination centers.

"Bremen can weather a crisis," said Seidenstücker. "We have proven that when politicians, businesses and public administrators pull together, we can achieve an awful lot."

Why not use people working in the hotel business in the vaccination centers — after all, their strength is being friendly and customer-oriented? Why not employ call center staff specializing in hotel and event management — after all, they are used to speaking with people and solving problems quickly? And why not make use of a software that has been tried and tested for years for booking concert and event tickets?

Up to 59 staff from Monte's hotel group have been working in the vaccination center, ranging from chefs to managers. Seidenstücker provided DJs and actors.

"We are used to organizing big events. And if we're honest, it's nothing more than a big event that runs over several months," said Seidenstücker.

Germany will return to normal pre-pandemic life next year, according to Health Minister Jens Spahn. The WHO has recorded a decline in infections and deaths globally. All the latest with DW.