Berlin's Gipsformerei has been making plaster copies of famous sculptures since the early 19th century. It is one of the last places on Earth plying this unique craft, and against all the odds, its order books are full. 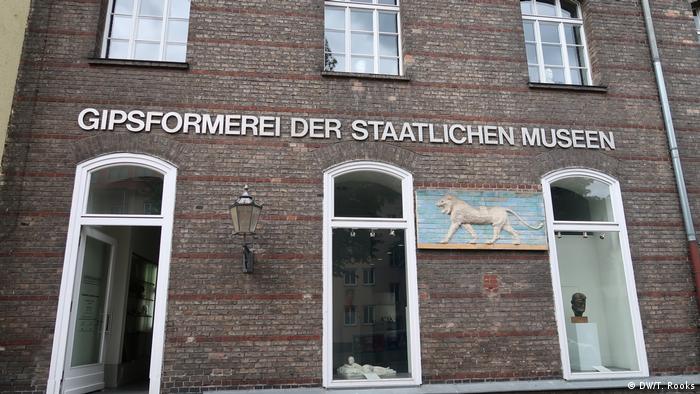 In the staircase hang treasures like Egypt's Rosetta stone. Upstairs are pieces from Babylon's Ishtar Gate and artists like Michelangelo, Donatello and Rodin. The entire four-story brick building in Berlin is jam-packed with art from around the world encompassing nearly every epoch. It's an unequaled collection. But none of it is what is seems.

What looks like the real thing are in reality plaster replicas that look exactly like the original. Though not ancient or wood or tile or stone, they are indeed something quite rare today, because this is Berlin's plaster cast replica workshop, the Gipsformerei.

Founded 200 years ago byroyal decree on December 8, 1819, the manufactory is firmly anchored in the past. Originally it was started to create a new branch of industry in order to make money and, almost as important, to be on par with Paris, which already had such a workshop. Still Berlin's team of skilled craftsmen has a place in the future.

Once upon a time, plaster casts of important works of art were one of the only ways for artists and the general public to experience art and architectural details from around the world. Before the advent of easy international travel and cheap illustrated books, museums and schools had no problem exhibiting such copies. But around a hundred years ago, these collections nearly disappeared. 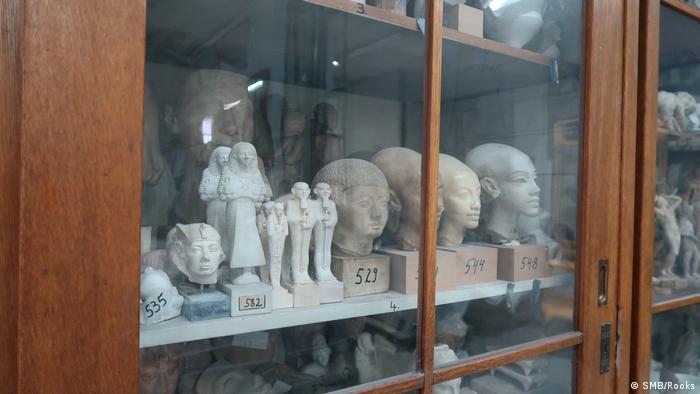 A cabinet full of master plaster replicas from across the millennium

Nonetheless, the Berlin plaster cast workshop is still trying to make money and it has overtaken Paris is many ways. Situated near Charlottenburg Palace in the western part of the city, the Berlin manufactory is filled with shelves overflowing with vintage molds, enough to make around 7,000 different casts, even the 42-meter (138-foot) Marcus Aurelius column from Rome.

These molds are working tools but at the same time form an important historical archive. Half of them represent works in Berlin's museums and some are themselves already 2 centuries old. Additionally, many of the original artworks have been lost, destroyed or damaged by time or pollution. These molds are the only record of their former glory.

"Often the works no longer survive and have been lost or destroyed in wars. That's what's special about our work. We can reproduce a state that recreates the past," said Miguel Helfrich, the manufactory's director. And he knows what he is talking about. His father, Klaus Helfrich, was the director of Berlin ethnological museum so he grew up surrounded by art from around the world.

Getting in the door

Two centuries ago, the first employee of the workshop, Domenico Bianconi, walked 37 days from Carrara in Italy to start work. He stayed at the workshop for the next 28 years and is seen as a model employee. Today, it's not so grueling to get to Berlin, but getting a job at the Gipsformerei isn't easy since it is so specialized and doesn't really exist anywhere else. 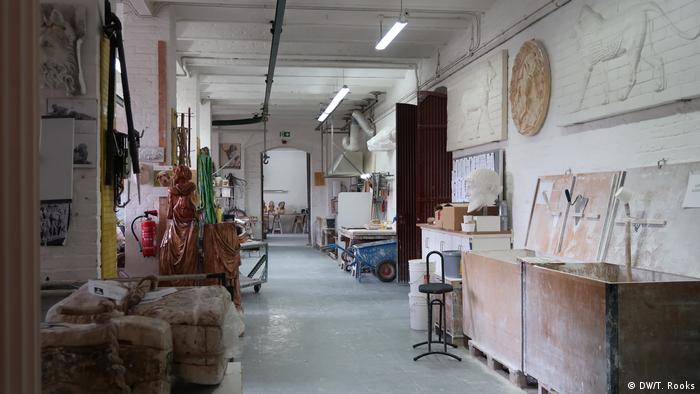 Part of the workshop where everything comes together. It's artisanal work at its finest

Moreover, as the other big museum replica workshops in Paris and Brussels have greatly reduced their staff, the Berlin workshop boasts 26 employees. Glancing in the production area there is a quiet sense of familiarity. Since Helfrich took over nine years ago, no one has been fired or gone elsewhere. Once there, craftsmen are loathe to leave.

Marc Miniers who came to the manufactory six years ago said that for a plasterer a job here was like "winning a lottery," adding, "but even when you start, you still have a lot to learn. It's like a training academy."

Though the workshop no longer offers an official apprenticeship program, Helfrich agreed: "We have many applications from people who would like to work here. So that's not the problem. Of course they don't have the required knowledge. You have to learn that here."

Who's afraid of a 3D revolution?

Originally created to promote the arts, sciences and create jobs, the workshop has defied current trends and stayed current. Those who complain that plaster casts are simply copies, don't usually complain about rare books, bronze sculptures, numbered engravings or a photographic print, which are also copies. The workshop's client base though has remained strong over time.

"The special thing about us is that anyone can order here. Generally, it is usually scientific institutions or art and cultural institutions that order from us. But there are also artists, architects, public institutions, private collectors and some private individuals as well," according to Helfrich. 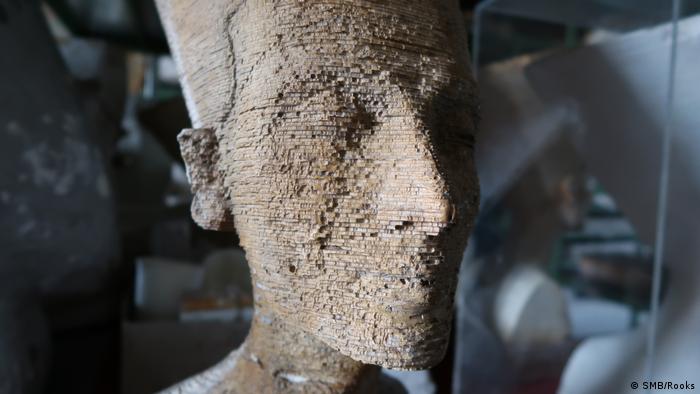 The workshop has not shied away from 3D scans or printing. Nearly 50 years ago, they started experimenting with noncontact reproductions. This 1971 attempt with the famous Nefertiti sculpture was the first of its kind

Besides the traditional labor-intensive plaster piece molds, the workshop now also uses silicon molds. They are just as accurate, but don't last very long, which in a centuries-old business is a problem. The manufactory has likewise been experimenting with 3D scanning and printers for decades.

Helfrich is not afraid of new 3D technology. "The technique is simply an additional method that we have. This 3D technology is excellent and we like to use it. But right now, we're better with our conventional technologies, much more accurate."

It is an addition to the toolbox and can be used for fragile pieces or in combination with more traditional methods. In fact, the workshop has been working with Berlin's Technical University on just such a hybrid contactless casting method. It's a delicate balance between the past and the future.

Building for the future

Though the list of bestseller casts has varied over the years, the workshop's order books are full. There is even a waiting list. And instead of small items for museum shops, they have turned into a specialist for large, complicated objects that only they can reproduce.

For individual pieces, prices range from under a hundred euros to the more alarming "price on request" depending on the amount of work necessary. The manufactory's biggest orders can easily take over 12 months to complete.

In a good year, the workshop brings in around €1 million ($1.1 million). Though not a jackpot, the Berlin State Museums believe in the manufactory enough to start the planning phase for an addition to their current home, which was purpose-built in 1891.

The new building will have more than 4,000 square meters (43,000 square feet) of usable space including new workshop rooms and more storage space. Additionally, an upcoming exhibition on the manufactory at the new James Simon Gallery on Berlin's Museum Island should elevate plaster casts in the public consciousness. 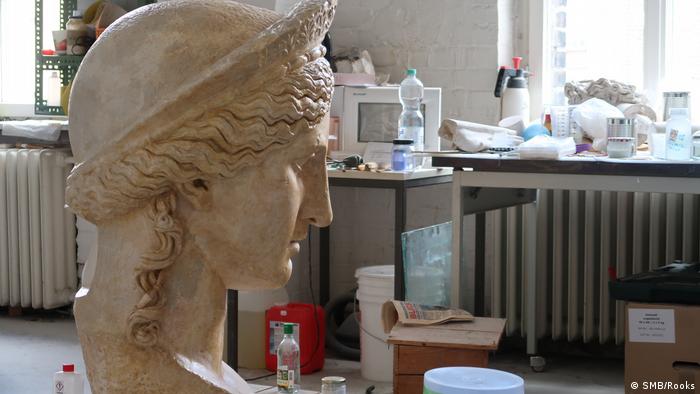 Juno Ludovisi, a monumental Roman sculpture from the first century, is a popular motif. Famous cast owners were Goethe and Wilhelm von Humboldt. Here it is drying after getting a coat of paint

For Helfrich, the next years will bring change, but the manufactory will continue to respect its unique history. Besides normal daily business, he wants to focus on researching their one-of-a-kind collection and work to better preserve it.

The other focus will be on improving digital printing and modernizing the Gipsformerei using its in-house expertise to mix historical manufacturing methods with current technology. "There is a person sitting at the computer and putting the individual layers together. There is a lot of handicraft involved. And I firmly believe that in five years we will have taken a big step toward digital manufacturing and have significantly improved our knowledge," he concluded.

No matter what tomorrow brings, the thousands of historic molds stored in the Gipsformerei will stay together and continue to offer a lasting and unique glance into our artistic past. They are an anchor for the future, because at the end of the day, imitation will remain the highest form of flattery.

The award-winning British architect, now 65, told DW what has changed about Berlin, how he feels about Brexit and why he's inspired by one of the poorest areas of Europe. (17.12.2018)

From November 17, important original works from ancient Pergamon and a 360-degree panorama will be shown in a temporary building. The restored Telephos frieze of the Pergamon Altar can also be seen again in Berlin. (16.11.2018)

3D-printed hearts: We'll have to wait a bit longer for the real thing

Heart disease and stroke are the leading killers of people globally. A tiny heart prototype made using a 3D printer shows progress, but scientists say we're a ways off being able to print organs for transplant. (15.04.2019)

A shortage of skilled labor