Nearly €1 billion worth of cocaine has been seized in the German port city of Hamburg. More than 4,200 packages in 211 sports bags were discovered in a freight container that shippers claimed was full of soybeans. 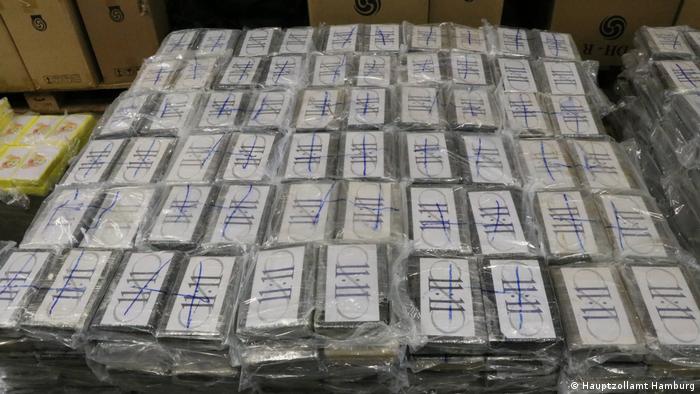 German customs has confiscated a record 4.5 metric tons (5 short tons) of cocaine in a shipping container in Hamburg, northern Germany, with a street value of nearly €1 billion ($1.1 billion).

The drugs were discovered two weeks ago during a routine check, resulting in the largest cocaine shipment ever seized in Germany.

More than 4,200 packages in 211 sports bags were discovered in a freight container that shippers claimed was full of soybeans. The shipment was being transported from Montevideo in Uruguay, via Hamburg, to Antwerp, Belgium.

"This enormous amount represents the largest individual seizure of cocaine in Germany," the Hamburg Customs agency said in a statement on Friday.

"Assuming that this likely high-purity cocaine can be cut to triple the amount for street sale, the 4.5 tons have a street value of approximately €1 billion."

The cocaine has already been destroyed, under strict extensive security measures.

Gateway to the world

Hamburg's port, Germany's largest and Europe's third busiest, is often referred to as the "gateway to the world" as the country's trade and travel has relied heavily on it throughout its history.

The EU Drug Markets Report found that Rotterdam was the main point of entry for drug smugglers, but that Hamburg was handling increasing traffic.

In recent years, cocaine shipments of up to one ton have been detected on numerous occasions, but Friday's announcement was an unprecedented amount.

In 2018, German authorities destroyed drugs with a combined street value of €520 million ($592 million).

Germany has become notorious for drug usage. In March this year, it topped a Europewide study for crystal meth and amphetamine use following close examination of the country's wastewater.

Authorities were alerted to what they now say is an international drug smuggling ring after finding cocaine hidden in shipments of bananas. It could turn out to be one of the largest cocaine trials in Germany's history. (12.02.2019)

Three hundred ships, a huge fireworks display and a three-day party — every year over 1 million visitors flock to Hamburg's Hafengeburtstag. But what makes it so fascinating? DW reporter Evan Woodnorth went to find out. (13.05.2019)