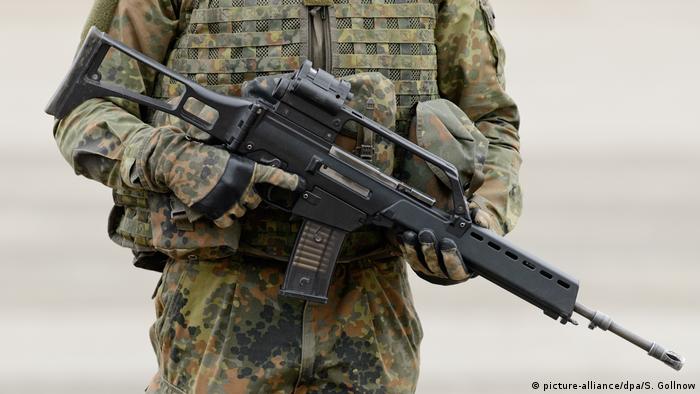 Scandal-rocked gun-maker Heckler & Koch has failed to win the contract to make the German military's standard assault rifle, ending a relationship with the Bundeswehr that has lasted 60 years.

H&K has been one of the German military's main suppliers since 1959, though a series of scandals and alleged problems with its G36's accuracy in high temperatures led the Defense Ministry to drop the assault rifle in 2015 and open bidding for a replacement.

Nevertheless, the Baden-Württemberg-based company was widely expected to win the deal to manufacture the G36's replacement, said to be worth some €250 million ($297 million) for 120,000 rifles.

Instead, the contract has been won by Thuringia-based Haenel Defence, whose rifle  performed better in tests, according to German media reports. However, the company is co-owned by an Abu Dhabi-based company that is in turn owned by the EDGE Group, a United Arab Emirates state conglomerate.

Anti-arms activist Jürgen Grässlin told DW the decision was a "catastrophe from a human rights point-of-view."

"We thought that the German government wouldn't approve the deal if the contract went to a company where the owner is not only not in Europe, but in the United Arab Emirates," he said. "The UAE isn't a normal country by our criteria: It's in a crisis zone, and for years it has been involved in the Yemen war alongside Saudi Arabia."

Read more: H&K fine 'should be used as compensation for murdered Mexicans'

Last year, H&K appointed a former Bundeswehr Inspector General, Harald Kujat, as head of its supervisory board, in an apparent attempt to use his contacts to the military to secure the contract. But Kujat resigned his post earlier this year when H&K was taken over by a French investor.

In a statement issued on Wednesday, H&K confirmed that neither of its two proposed weapons had been accepted by the government. "At the same time we are absolutely convinced of the quality of both the HK416 and the HK433," CEO Jens Bodo Koch said. "This quality was confirmed to us by the Bundeswehr during the competition." The HK416 rifle is currently being used by the US Marines, as well as the French and Norwegian militaries.

H&K also insisted that none of the 950 jobs at its factory in Oberndorf were under threat because of the decision.

But the company remains in a financial hole: At its AGM at the end of August, H&K revealed it was still some €237 million in debt as of the end of the last year, though it was slowly clawing its way back to making a profit, having made €7.6 million in the first six months of this year. That is partly because its US business, where it sells rifles and handguns for the civilian market as well as to the military, is comparatively successful.

H&K has shifted its attention to the US market after a series of export scandals. Last year,former company managers were convicted of illegally selling weapons to Mexico, in violation of Germany's export controls.

Germany's most notorious gun manufacturer, Heckler & Koch, has vowed never again to sell weapons to non-NATO and EU countries - though it has not announced the strategy. It is the first arms firm ever to do this.