Germany's most notorious gun manufacturer, Heckler & Koch, has vowed never again to sell weapons to non-NATO and EU countries - though it has not announced the strategy. It is the first arms firm ever to do this. 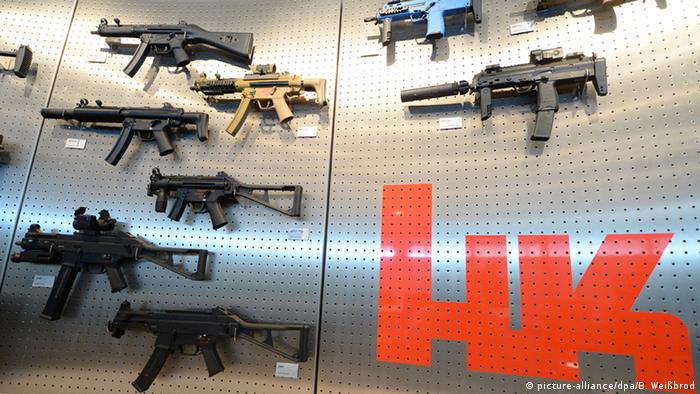 Heckler & Koch, the German company whose guns have been estimated to kill one person every 13 minutes, has quietly changed its strategy to become effectively the world's most ethical gunmaker.

But instead of announcing the apostasy in a press release, the company buried it towards the end of its yearly auditor's report - and then confirmed it on questioning by shareholders at the annual general meeting in mid-August. A H&K spokesman confirmed the report to DW by email on Thursday, saying, "Heckler & Koch chose a new strategy in spring 2016. As a consequence we have withdrawn from the crisis regions of the world."

The notes on page 3 of the annual report, published in March, read, "we are not seeking to take part in new tenders in non-green countries." "Green countries" are defined by company's the own criteria, based on three classification systems: NATO membership or being a "NATO-equivalent country" (Japan, Australia, New Zealand, and Switzerland), Transparency International's corruption index, and the Economist Intelligence Unit's democracy index.

This means that H&K has become the first arms company in the world to have a more moral arms export policy than its own government (the German Economy Ministry declined to offer a statement or interview partner in time for this article) - and will not be selling weapons to Saudi Arabia, Egypt, the United Arab Emirates, Oman, and even Turkey (despite its membership in NATO), or any African country. 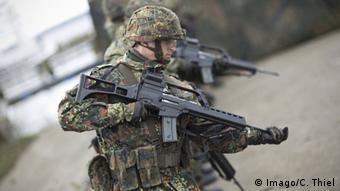 Not only that, the company has even agreed to "seriously discuss" the possibility of setting up a "victims' fund" for families who had been killed with H&K weapons - which would also be unprecedented among the world's gunmakers. Details about how that would work remain unclear, however.

H&K said in its report that its executive directors had made the decision "in alignment with the principles of the German Federal Government governing the export of small arms and light weapons" - even though those principles - ethical guidelines drawn up by the German government for approving arms deals - are not legally binding and usually ignored by the government.

Though the new course had already been plotted, no one appears to have noticed it until August 15, when it was confirmed at H&K's annual general meeting in a small "wellness hotel" in the tiny village of Sulz am Neckar in southern Germany.

Though reporters were excluded from the meeting - indeed from even entering the grounds of the hotel - seven peace activists were allowed to attend because they had strategically bought single shares in the company. "It was pretty absurd," said Jürgen Grässlin, one of the activists and spokesman for the anti-arms trade campaign "Aktion Aufschrei - Stoppt den Waffenhandel!" ("outcry action - stop the arms trade!")

The protesters made up more than a third of the 18 or so shareholders who attended. None of the regular shareholders spoke, and the most important of them, the investor and H&K co-owner Andreas Heeschen, who owns 51 percent of the shares, sent a representative who did not identify himself during the meeting.

The campaigners proceeded to make use of their shareholders' right to ask questions at the AGM - and spoke for 70 minutes about the damage that H&K's guns have inflicted on the world in its six-decade history. 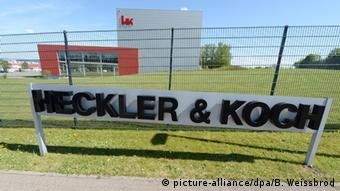 The company's headquarters are in Oberndorf, southern Germany

H&K's impact on the world's conflicts has been massive. The G3 assault rifle alone, first produced in 1958 and once the German soldier's standard weapon, has been licensed to, among others, Iran, Saudi Arabia, Pakistan, Turkey, and Mexico - from which millions of them have found their way into dozens of conflicts around the world and into the hands of virtually every terrorist group. Grässlin has estimated that an average of one person has been killed every 13 minutes by an H&K weapon since the company's foundation in 1949.

To the activists' surprise, the company chairmen sitting in the small room in the hotel listened patiently to all 110 questions the "critical shareholders" had brought along, answered the ones they could, and asked for a half-hour break to prepare more thorough responses.

The upshot was that supervisory board chairman Dieter John confirmed to Grässlin on the day, and then again by phone this Wednesday, that the company would no longer sell weapons into conflict zones "and all promises from the AGM would be kept."

Grässlin claimed the result as a huge success for Germany's peace movement. "In the past decades we have applied immense pressure on Heckler & Koch on the level of non-violent action, publications in books and film, as well as legal measures up to and including criminal charges," he said. "That is now showing an effect."

The company has indeed been the focus of much media attention in Germany in the past few years. This culminated in a documentary and feature film double bill about H&K aired on primetime public television in September 2015, which centered on the company's illegal sale of G36 rifles to Mexico between 2006 and 2009. Several former H&K employees are under state investigation over the affair - though the investigation has taken some seven and a half years.

Perhaps for that reason, Grässlin underlined that these good intentions would remain "under scrutiny." He also had other caveats - one of H&K's biggest markets is the US domestic market, which of course remains fair game for the new strategy.

The Bundeswehr has been criticized after children were pictured holding assault rifles at an open day. Activists say the army is systematically breaching UN recommendations on advertising the military to minors. (15.06.2016)