Germany's biggest small arms maker is bidding for the contract to supply the German army's standard assault rifle. But Heckler & Koch's HK433 would only replace the firm's own scandal-ridden G36. 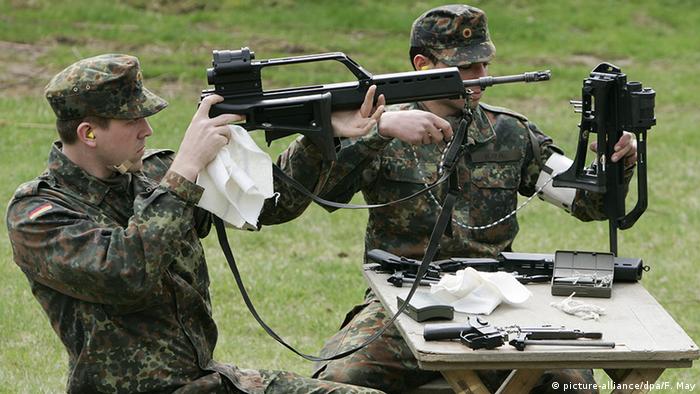 The Bundeswehr is in the market for a new assault rifle, and all of Germany's major gun-makers have now thrown their bids in the ring. Both Sig Sauer and Rheinmetall (the latter in collaboration with Steyr Mannlicher) both recently announced plans to offer a gun, and now Heckler & Koch has followed suit.

"Of course, we will take part in the bidding process - assault rifles are our core business," Heckler & Koch CEO Norbert Scheuch told the DPA news agency. "We are very well positioned for the upcoming competition," the CEO said, after presenting the new HK433 assault rifle in Las Vegas as an alternative.

But Scheuch's statements (confirmed to DW by an H&K spokesman) came with a tang of bitterness, as the reason that there is a competition in the first place was a dispute between the Oberndorf firm and the German Defense Ministry, which ended H&K's contract to supply the German military with its G36 assault rifle after tests suggested the rifle overheated and lost accuracy from intense use in hot weather.

Nevertheless, the German government has since made peace with H&K, not least after a state court ruled in 2016 that the G36 had no flaws that violated the firm's contract. 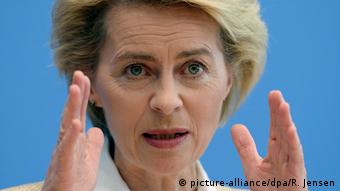 Von der Leyen said the G36 would be phased out

Despite this ruling, Defense Minister Ursula von der Leyen insisted late last year that the G36, the Bundeswehr's standard gun since 1997, would be phased out and that a replacement would be phased in from 2020.

The bidding process, which has been subject to delay, is now set to begin this year, and H&K is currently among the favorites to win back the contract. It would be a huge contract for any supplier (the German military currently uses some 167,000 G36s) and a number of international arms companies are interested, including Beretta and possibly Colt.

But for Otfried Nassauer, founder and director of the Berlin Information Center for Transatlantic Security (BITS), one of the three German bidders is most likely to win - and H&K certainly has a good chance with its new HK433. "It was always more robust than the G36 - but it is also more expensive," he told DW. "It looks like this rifle is more than a HK416F [the assault rifle H&K sold to the French military last year] with further modernizations. Some features from the G36 have gone into it, plus a few new elements. ... The rifleman can change the ammunition caliber without a problem."

Not only that, given that H&K specializes in assault rifles and has enjoyed a position as the Bundeswehr's main gun supplier since the 1960s, it is arguably in the best lobbying position in Berlin's corridors of power. "But the entry of Rheinmetall has created a more dangerous competitor than Sig Sauer," said Nassauer. "Rheinmetall is a big company with a big political lobby. It's the biggest German arms supplier." 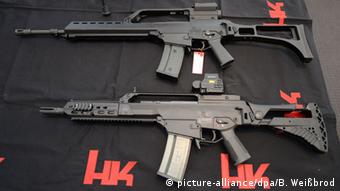 The G36 has been the Bundeswehr's standard rifle since 1997

Rheinmetall also once made the Bundeswehr's assault rifles along with H&K, and as Nassauer pointed out, it has a factory that could be equipped to mass produce an assault rifle. Since it is also in Oberndorf, where H&K is situated, there would be enough local skilled workers to make it.

Notoriously, H&K is caught in a number of lawsuits. There is a long-running court case over the sale of thousands of G36 rifles to Mexico, violating Germany's export control laws, and now it is also being sued in the US by the arms manufacturer Orbital ATK for allegedly failing to fulfill its part of a joint project to make a high-tech rifle for the US Defense Department.

But that needn't be a problem in winning the contract, according to Nassauer. "All the manufacturers have shown themselves as black sheep on the export side at some point," he said. "Sig Sauer had problems over exports to Colombia via the US."

Unlike those companies, however, H&K needs the contract more than others - the arms manufacturer is known to be in considerable debt (several hundred million euros), and had to receive a 60-million-euro ($65-million) cash injection in 2015. "They really need the contract," said Nassauer.

A state prosecutor has been given a "slap in the face" by a Munich judge in an infamous illegal arms deal case. She dismissed his charges against journalists who released the documents they had given him to investigate. (12.12.2016)

A manager at Germany's most important gun manufacturer has told a news agency that it is planning to stop sales to non-NATO members. But activists are skeptical about what the anonymous pledge really means. (29.11.2016)

The Bundeswehr has been criticized after children were pictured holding assault rifles at an open day. Activists say the army is systematically breaching UN recommendations on advertising the military to minors. (15.06.2016)