Germany's new government is taking shape. But did all three parties get a good deal? Or were the Greens outdone by the smaller neoliberal FDP? Now, the party that has taken pains to stress harmony, sees cracks reappear. 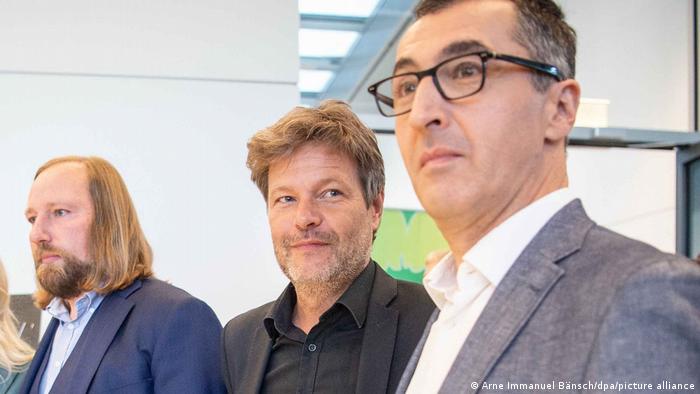 Negotiators from the center-left Social Democrats (SPD), the Greens, and the Free Democrats (FDP) remained tight-lipped through weeks of coalition talks, but the show of harmony soon came to an end after the final deal was presented.

On Thursday, the Green Party went through 24 hours of internal wrangling over which of its prominent figures would come away with the spoils.

The environmentalist party had emerged with five of the 16 Cabinet posts — plus the non-ministerial role of state minister for culture — but filling the posts while satisfying both the moderate "realists" and the left-wing "fundamentalists" in the party proved tricky.

By contrast, the neoliberal Free Democrats had by all accounts made their personnel decisions smoothly several days earlier. 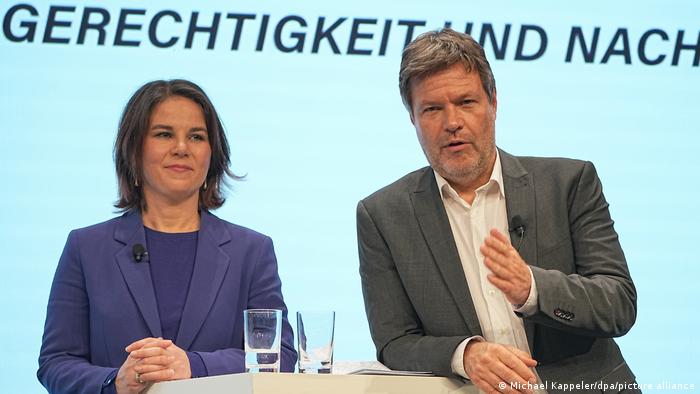 A victory for Green 'realists'

In the end, the Greens' moderates had their way in the biggest battle: The new Food and Agriculture Minister (a key office for the party program) will be Cem Özdemir, a veteran and hugely respected former party leader, but one not considered an agriculture expert.

Özdemir's elevation to the Cabinet made sense. The 55-year-old will be only the second person of Turkish background to take a Cabinet post, 27 years after he became one of the first-ever Turkish-German members of parliament. Not only that, Özdemir won a direct Bundestag seat in his native state of Baden-Württemberg with one of the Green party's most resounding victories in September's election.

Özdemir was elevated instead of Anton Hofreiter (pictured on the left in the top picture, Eds.). A biologist by training and the Greens' co-leader in the Bundestag, Hofreiter published a book on the damage caused by industrialized meat production in 2016 and had led the party's working group on transport policy during the coalition negotiations.

But, according to public broadcaster ARD, his preparation and negotiation skills disappointed party leaders, and the Greens ended up ceding the Transport Ministry, to the FDP, a party considered a friend of Germany's car industry.

Since the Green Party's beginnings in West Germany in the 1980s, the party's fundamental ideologists were pitted against the party's pragmatic wing (whose name comes from "Realpolitik") whom the leftists saw as power-hungry "traitors."

It was only in the past few years that party co-chairs Robert Habeck and Annalena Baerbock put on a convincing show of harmony, stressing the Green Party's new more mainstream image, paving the way to electoral success on regional levels and now on the national one.

The Greens have been on the defensive since the coalition contract was presented last week. The party has faced recrimination from activists for not getting firmer climate commitments, and criticism from media pundits who suggested that the party had surrendered too much government power to the FDP, especially by losing the Finance Ministry and the Transport Ministry. After all, many argued, the Greens had scored a better result in the election.

But some observers think that the party can be satisfied. Wolfgang Schroeder, a political science professor at Kassel University, feels the Greens did well enough. "In a way, it is a small miracle that this coalition found a way to work together," he told DW. "They were after all very different forces in it."

One criticism was focused on the fact that the target of phasing out coal power by 2030, though more ambitious than the current date of 2038, was phrased with the qualifier "ideally" in the coalition contract.

But Hubert Kleinert, a political scientist at the Hesse University of Applied Sciences and himself a former Green Party Bundestag member, predicts that the Greens will face intense pressure to show results in the coming years.

"Disappointment always sets in when you switch to government, perhaps more so for the Greens," he told DW. "And you get caught in a mass of detail-problems."

Habeck, the Green co-leader about to take over the Economy and Climate Protection Ministry, will be under special scrutiny as the face of the next government's climate protection efforts. "The greatest burden will be on him," said Kleinert.

But political analyst Schroeder thinks the Green Party has attempted to inoculate itself from this criticism by emphasizing that the fight against climate change is a task for the whole government.

"The big fear of the Greens was that they would be made solely responsible for whether climate protection would succeed or not," Schroeder told DW. "From that point of view, I think it was a really big success for the Greens to make clear that social-ecological transformation can only succeed if everyone supports it."

More strife on the cards

"The fact that they don't have the Transport Ministry is certainly a point. You can say that's a defeat," said Kleinert.

Wolfgang Schroeder agrees that Hofreiter's defeat is significant, and could be problematic for the party. "I think the distribution of ministries does not reflect the real power balance in the Green Party," he said. "That's a bigger problem because one position is not represented."

As things stand, the Greens are about to have their principles tested by the realities of government. As Kleinert put it: "All I know for sure is that it is going to be a very difficult, conflict-heavy time for the Greens."

The old divisions may flare up again at a planned party gathering next weekend, which has been called to vote on the coalition contract. And going forward, the Greens will see a major reshuffle, as a party rule forbids individuals from holding a government office at the same time.

Green Party co-chair Robert Habeck has come to the forefront following the election, which saw his party double its seats, but fall far short of becoming the strongest party. Now he is set to become vice-chancellor.

Germany: Who is Annalena Baerbock, the prospective new foreign minister?

The Green Party co-leader Baerbock is set to become the country's next foreign minister. Critics wonder whether it's the office the Greens really wanted, and what her stances on China and Russia are likely to be.

Germany's first and so far only Green state premier has been returned to office in regional elections this Sunday. His alliance with the conservative CDU is seen as a model for the national level in the post-Merkel era.