The Women's Marches show feminism is more relevant than ever. As Germany's influential feminist magazine turns 40, "Emma" and its founder Alice Schwarzer remain outspoken, even as they lose the support of younger women.

Hundreds of thousands of people took to the streets. They wore pink hats and carried signs to express their disgust towards misogyny, homophobia, racism and intolerance. The day after President Donald Trump's inauguration, the Women's March not only took over the streets of American cities like Washington, D.C., Seattle and New York; protests of solidarity also took place around the world, from London and Berlin to Nairobi, Tokyo and Sydney.

The images recall the beginnings of the women's liberation movement in 1970s Germany. Laws that put women at a substantial disadvantage to men drove women into the streets to protest back then - as they do now. In Germany in the 70s, married women were legally required to manage the household, and were only permitted to hold a job if it didn't mean neglecting their responsibilities as wives and mothers. Men, on the other hand, could quit their jobs without any approval of their wives.

All the while, Germany's constitution from 1949 maintained that "women and men have equal rights." 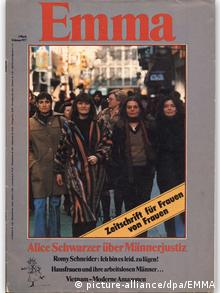 At the time, women in Germany began to rebel against this brand of inequality. One of their most important mouthpieces was the magazine "Emma," whose name was derived from the word "emancipation."  Its subheading called it a "magazine for women by women," and it fast became a symbol of the feminist resistance.

The magazine's first edition appeared on newsstands on January 26, 1977. Its founder, Alice Schwarzer, was scourged in the media, dubbed a "scorner of men" by the national daily newspaper, "Die Welt."

Today, 40 years on, the publication is still in print.

"As far as I can see, 'Emma' is the last professional magazine for sale today that remains in feminists' hands," Schwarzer told DW.

Around the same time that "Emma" was founded, another feminist magazine called "Courage" was launched in West Berlin. It only lasted until 1984; Emma, by comparison, continues to print nearly 30,000 copies of each issue to this day.

Nearly two-thirds of those issues land directly in its subscribers' mailboxes. One of those subscribers is Ilse Lenz, a retired professor of Gender and Social Structures at the University of Bochum. She has collected around 1,200 pages documenting the development of the women's movement in Germany from 1968 through today.

"'Emma' repeatedly uncovered grievances and criticized the exploitation and subordination of women. It moved many women to action and was able to be a powerful voice in society. A lot has changed in the country as a result," said Lenz.

Breaking taboos by talking about them

Even before "Emma" was launched, Alice Schwarzer was well-known as a feminist. In 1971, she initiated the campaign "We had abortions" in Germany, based on a similar movement in France. It became a nationwide scandal: On the cover of the magazine "Stern," women confessed that they had broken Paragraph 218 of the law by terminating a pregnancy. 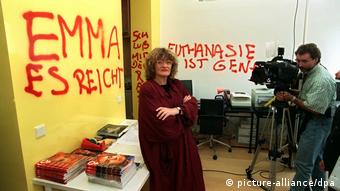 "Emma, it's enough!" The editorial office was vandalized in 1994

In 1975, Schwarzer managed to rock the boat again with her book, "The Little Difference and Its Huge Consequences." She not only interviewed women about their daily lives, marriages and children, but also about power roles in bed, the weight of sexual pressure and the oppression of women as sex objects.

Over the past 40 years, "Emma" has dealt with numerous women's issues. In 1978, it sued "Stern" for publishing misogynistic cover images. Later, it launched a campaign against pornography, genital mutilation and the discrimination of young Muslim women.

"'Emma' regularly stirs up controversies. It has sparked controversies itself and has started debates, and that is perhaps its greatest achievement," said Lenz.

The magazine, which is also available online, publishes portraits of strong women and practical do-it-yourself tips on things like changing tires.

Though it may be well-established after 40 years, "Emma" still takes fire from critics on a frequent basis. The young German feminist Margarete Stokowski canceled her subscription because she found the magazine "unbearable," she wrote in November 2015.

"'Emma' accompanied the women's movement for 40 years, and now we are seeing a conflict with the new generation of internet feminists. The main points of contention are anti-racism and "Emma's" initiative to regulate prostitution. I also see 'Emma's' problematic stances, which don't differentiate between Islam and fundamentalist Islamism. These contribute to problematic opinions of immigrant women. But I think that this conflict should not ignore what 'Emma' has achieved and opened up over the past 40 years," said Lenz.

Schwarzer herself has been criticized for her autocratic leadership style, for participating in ad campaigns for major German tabloids and for tax evasion, to which she confessed in 2014.

There was a time when Schwarzer considered giving up her role as editor-in-chief of "Emma," but she has held on to the position with no successor in sight. She said that letters from readers, some of which have been published on the occasion of the magazine's 40th anniversary, have kept her motivated. 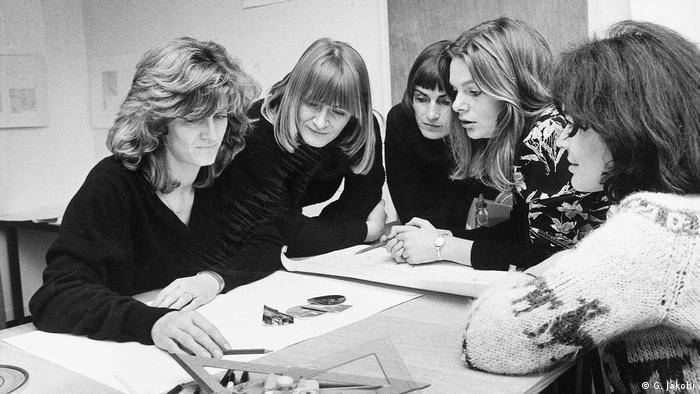 Alice Schwarzer (second from left) with her editorial team in 1977

"These letters are very self-confident, but also heart-wrenching. They show how 'Emma' very concretely gives women courage and changes their lives," said Schwarzer. "And they show that feminist thoughts and actions continue to be vital. You can't do away with 4,000 years of patriarchy in 40 years."

Where are the female executives?

When the first edition of "Emma" was released, there were only 38 women in the German parliament, representing less than 10 percent of the lawmakers. Now women comprise 37 percent of parliamentarians. The vast majority of people in Germany want gender equality, said Ilse Lenz, but we're still a long way off.

According to the German office of statistics, women earn seven percent less than men in the same jobs and with the same qualifications. The German Institute for Economic Research (DIW) attests to slight progress in the proportion of women on supervisory boards. However, the numbers are still weak: Just 23 percent of the supervisory boards and eight percent of executive boards of top companies are made up of women.

If the trend continues, it will take another 60 years until boards contain an equal number of men and women, according to the DIW - and that's an optimistic estimate. 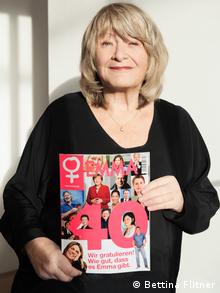 "The domination of the old men and the husbands, which was prominent in West Germany well into the 20th century, has been broken, but we have new problems: due to greater flexibility at work, the social inequality of class, migration and gender, and ongoing unequal division of labor in relationships," continued Lenz.

"Not much has changed in family life. Women largely continue to take on caring for children and the elderly."

Feminist ideas are not only being challenged in the US, but also in Germany with the rise of the right-wing populist party AfD. "Their model is a woman that is there for the family and the nation. Immigrant women and men are devalued and excluded by party representatives. One wing of the AfD apparently wants to get rid of abortion in the context of the current laws," according to Lenz.

The return to fundamentalism in politics, religion and society will certainly give "Emma" plenty of material to work with in the coming years.

The recent women's marches were largely held to protest Trump, but also follow in the footsteps of feminists through the ages. As Germany's feminist magazine "EMMA" turns 40, we look at women who've fought for equality. (26.01.2017)